Share Article
Share Tweet Share
not sure exactly what to call Glavin's deck. It somehow mixes and Cephalid Reanimator in the same sixty-card deck. It looks amazingly difficult to play. Lucas Glavin is America's last hope to keep the trophy at home. His opponent, Masashi Oiso, Japanese superstar, is playing a quite normal Aluren. 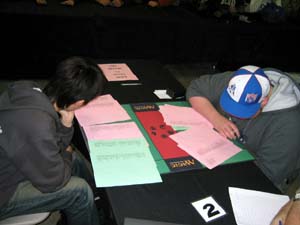 They somehow managed to get enough English going to settle on a prize split and got back to studying the tricky decklists like madman. How they manage to ignore the noise from the small crowd who amazingly has not defected to see the Super Bowl is beyond me. We are actually in a "race" to see if we can finish it off before the kickoff.

They both mulliganing once but still came out fast. Glavin used Worldly Tutor to fetch Cephalid ist while while Masashi opened with Birds of Paradise and Living Wish for Volrath's Stronghold. On his third turn Lucas Glavin used the ist to dump almost all his deck - he kept only one card - into his graveyard.

That allowed him to destroy Masashi's hand using Cabal Therapy twice. On the next turn Masashi Oiso's eyes visibly widened when Lucas Glavin showed him Exhume. He let the American go through the combo getting Sutured Ghoul into play before conceding, still strangely rattled.

Although the story is quite short the game took a while. Every turn brought a lot of opportunities to screw up so they took their time and calmly worked through their plans.

The second game did not start well for Masashi. He was in almost physical pain over the mulligan. Should he take it or not? Finally he went Hamlet on us and kept it. He used a turn two Cabal Therapy to catch a Cephalid ist while the American played Nomads En-Kor and a crucial Kami of Ancient Law.

Still, Oiso was unafraid. At four mana he unleashed Aluren and . Glavin checked with the judge on a timing issue before deciding if he would blow his Kami or not in response to the Harpy. Finally he decided to use the Kami. It was Oiso's turn to respond, with Raven Familiar and two Wall of Blossoms. He found no way to keep going on that turn but he did find Vampiric Tutor.

That was just what he wanted, when Glavin sent the turn back. He Tutored for another Aluren, flashbacked Cabal Therapy to scout for trouble and went for it. Lucas Glavin sat in silence while the tiny Japanese worked his magic. When he saw the Living Wish for Auriok Champion he knew there was no way for Oiso to fizzle. We where on our way to the third game.

The Japanese was visibly relived to have have pulled out that game. He stared at the ceiling for a few seconds, slapped himself out of the trance and reached for his sideboard.

Again Oiso was shocked with his hand. He seemed as eager to keep it as somone scheduled to fight Mike Tyson. Glavin barely stared at his hand before keeping it. After a few prayers Masashi Oiso made a decision: he kept it.

He started out with Birds of Paradise while Glavin used Vampiric Tutor to get Cephalid ist, which he played on his second turn. Oiso used his own Tutor to fetch Cabal Therapy. He missed, seeing Worldly Tutor, Vampiric Tutor and Sutured Ghoul in the process. Again he lapsed into thought. He was on the verge of getting stomped by an extremely large Sutured Ghoul. 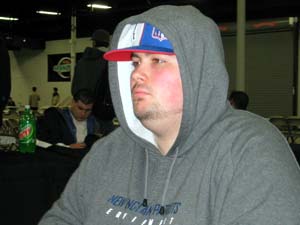 After a full minute he could come up with no better plan than to play a second Birds of Paradise and flashback Cabal Therapy with Glavin's Fobidden Orchard tokens. Again Glavin used Vampiric Tutor, this time for Starlit Sanctum.

He dropped it and tapped out to add Shaman En-Kor to the puzzle. He then paused for a full minute before nodding and passing the turn. It was Masashi Oiso's turn to play the "can I win this right here, right now?" game. He sent his crew in and Glavin chumped, dumping most of his deck into the graveyard with departing Cephalid ist.

Again Oiso thought about it. He checked Glavin's graveyard. He probably wished he had a Coffin Purge in hand. But he didn't. So he had to come up with another plan. His hand of Aluren, , Birds of Paradise and land wasn't enough. He seemed to have no way out.

He dropped Aluren and passed the turn to a very surprised Lucas Glavin. The American sat for a moment wondering what sort of trick the Japanese had.

Lucas: "Two cards? How many s in there?"

The game stopped while the judge fetched the Oracle test of . Lucas Glavin seemed to be convinced Masashi Oiso had one. Could Oiso pull off that kind of bluff on the last game of a Grand Prix final? Glavin sat in silence going mentally through Masashi Oiso's list.

He went for it, tapping his lands with confidence. He used Krosan Reclamation and played Reanimate. Oiso sat up. Apparently the Japanese wasn't bluffing. He had some way to pull this off. Through his broken English came the question.

Masashi: "Target for the Reanimate?"

Everyone stared at him. Target? The Sutured Ghoul, obviously. Wait... there was one card in Lucas Glavin's hand. Yup, it was the Sutured Ghoul. See, Glavin had the Ghoul in hand, and his plan was to Cabal Therapy himself sacrificing his remaining creature to get the Ghoul in the graveyard. 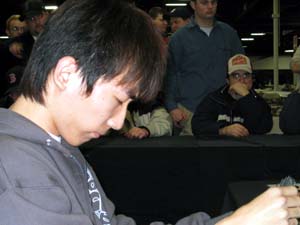 Oiso praying before a mulligan.

Now, he had Reanimate on the stack, and his perfect target in his hand. He couldn't use Therapy now, because it's a Sorcery. Oiso's "I got a plan" bluff had just pushed Lucas Glavin into making a crucial mistake on the last possible play.

Somewhere in the huge empty room, a few Japanese players went through whatever "High Five" ritual they have. They came to America and took the Grand Prix. With one of the coolest moments in Grand Prix history.

Masashi Oiso is the winner of Grand Prix Boston 2005!