Share Article
Share Tweet Share
the best nice way to start the second day of a Grand Prix. The undefeated American Osyp Lebedowicz, playing Desire, against one of the Japanese, Kenji Tusumura playing Scepter-Chant. So it should be the classic, tense battle between Combo and Control. 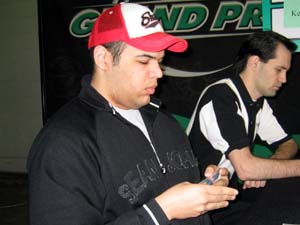 Osyp set up his table.

They started slowly with Osyp trying a turn two Sapphire Medallion. Tsumura had the Counterspell for it, but had no answer for the next turn . So he used Cunning Wish to find one. The Familiar bit the dust with a techy Last Breath.

Osyp's land kept coming while Kenji was locked at three mana. That clearly wasn't very good for the Japanese. He had to allow Osyp's card drawing spells because taping out might cost him the game.

By the time he found his fourth land, Lebedowicz already had seven mana. Tsumura had to make a move: He played Isochron Scepter and got on it. When it resolved he probably thought he had the game somewhat under control.

But he didn't. Osyp fired an end of turn Turnabout on Tsumura's lands. Tapped out the Japanese could only watch in horror as the American went for it. Two Cloud of Faeries, two Snaps, one Cunning Wish (for Brain Freeze) and two Brain Freezes later... Tsumura was scooping.

Osyp started the game with turn two but Kenji put a stop to any plans of a fast game with a turn two Isochron Scepter on . Smiling the American Intuitioned to put two Deep Analysis in his graveyard.

Still the Japanese wasn't in good shape. Sure he had the Scepter out but again his mana was nowhere to be found. He was locked at two lands, limited to using the Scepter on Osyp's upkeep. Calmly the American set up an end of turn Cunning Wish to find Echoing Truth. The Scepter left the table.

Unleashed once again Lebedowicz flexed his Combo muscles. The mana-screwed Kenji Tsumura - by now discarding on his end step - could do little but watch Osyp play Sapphire Medallion and dig deep for the right cards. 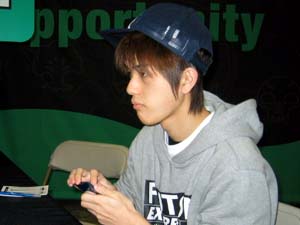 Kenji got no love from his deck.

He did find a third mana source, Chrome Mox, but again Lebedowicz was just about ready to put the game away. He Intuitioned for Turnabout walked it into Counterspell, nearly tapping out the Japanese. All he had to fear now was Mana Leak or .

He started going through the motions and when he went for Mind's Desire Tsumura tried . Osyp used Cunning Wish to find Mana Leak and he now had the table all to himself.

Desire resolved for four, getting Merchant Scroll. That got Snap, which bounced Could of Faeries... and Osyp played another Mind's Desire. This time for twelve. Tsumura waited to see the cards, but as soon as he saw some business spells he extended his hand.