Share Article
Share Tweet Share
here are two names you might recognize from Pro Tour results. Morita is one of the giants of the Pacific with an incredible long string of good results in the Asian circuit. Daniel OMS was once part of Antarticta, the first big name team in the circuit, along with his brother Steve and Jon Finkel, and is certainly no slouch on his own. While he has been drifting away from the Pro Tour circuit lately, there's nothing like a Grand Prix in your area to get you back in the game. 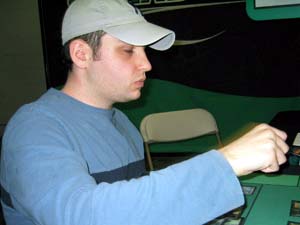 Daniel OMS trying to set up a clock.

OMS came out with turn two Wild Mongrel and turn three Arrogant Wurm while Masahiro went about fetching the missing pieces of his life combo with . The Japanese resolved one of his creatures but when he tried a second one Daniel Intuitioned for Circular Logic and countered it.

Although a good move it was not enough to stop the Japanese. He had enough mana to play another copy of the remaining piece of the puzzle and Worthy Cause. That netted him a gazillion life. It didn't take long for the American to scoop, he just waited enough to see Morita use Academy Rector to find his "win condition".

They both didn't seem so sure about how to sideboard for this match, and went back and forth between their maindecks and sideboards a couple of times. Morita hunched over his seven cards for a full minute before sending the hand back.

He came out strong, trying Aether Vial on the first turn, convincing Daniel to use Daze. That switched the flow of the game. One pice of puzzle resolved, than Daniel tapped out to play Wild Mongrel and another piece hit the table. Masahiro was on the verge of taking the match. 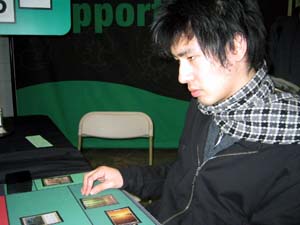 OMS was forced to tap out to flash back Deep Analysis just to find a third land. That gave Morita another open turn but he couldn't add anything to his combo (he already had Task Force and Shaman En-Kor out). He was forced to give Daniel OMS a chance to stumble back out of the proverbial ropes. The American tried Intuition and in responde Masahiko fired out a Worthy Cause for a gazillion life.

That would have spelled the end of the round right there, but Daniel had Circular Logic in his hand. Intuition resolved, with Morita still at nineteen, for double Wonder and Roar of the Wurm. Morita slipped to fourteen, untapped and... played another Worthy Cause.

This time, the tapped out American could do nothing about it. Masahiko went up to 30 million life points. Not that it matter. Daniel O'Mahoney-Schwartz surveyed the table one more time and extended his hand, there was no way he could catch up.