Share Article
Share Tweet Share
has a very cool deck and is no stranger to Top 8s, having made one at Grand Prix Atlanta. Still he puts his chances against Oiso's deck at "None. At all." According to him there is no way he can stop the Japanese from comboing him out. If he's correct he will - again - lose in the Top 4 of a Grand Prix. 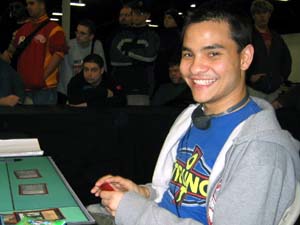 Keith Smiles his way through the semifinals.

Things certainly didn't start well for the American: he had to send his first hand back. For the crowd, especially after his glooming prediction the buzz seemed to be all about Oiso making the final.

Still he opened quite fast with second turn Hapless Researcher and Reanimate to bust out Bosh, Iron Golem. Not too shabby as far as clocks go. Masashi took his time to figure out how to handle his Brainstorm. He finally settled on playing Chrome Mox and Wall of Blossoms.

Bosh smashed through to drop the Japanese to fifteen and McLaughlin announced an "awful" play. He used Exhume to get back Hapless Researcher, giving Masashi Oiso his Wall of Blossoms once again. At four mana Oiso used Living Wish to get Gilded Drake.

Keith: "And he can throw Bosh at me! That's not fair."

It certainly wasn't and a turn later he was one game down. He probably didn't expect to lost Game 1 this way, but that's the way the game works. He didn't seem to depressed by it and had no problems joking about it between games.

Keith: "You are supposed to win with Aluren, not Bosh."

This time McLaughlin got his game going from turn one: Careful Study dumping Platinum Angel and Sundering Titan. Oiso whiffed on a Cabal Therapy for Exhume (seeing Intuition, Hapless Researcher and Fire/Ice). The Researcher got another Angel on the graveyard.

Fire/Ice kept the Japanese from reaching the crucial four mana and Keith used Vampiric Tutor to dig out Exhume. Surprisingly he decided not to play it, instead setting up for Intuition. Oiso played his own Vampiric Tutor picking Brainstorm. 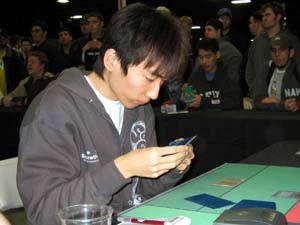 Oiso focusing on his combo.

The Japanese untapped and went for it. He played Aluren and got ready to roll. McLaughlin stopped him for a second and tried to work out if he could break the combo. When Oiso announced the stacking and showed him Raven Familiar he conceded.

At the Keith to Oiso explained he had held back Exhume because Masashi Oiso made a mistake. While resolving Brainstorm, while putting the cards back on the deck he had revealed Living Wish. So he was waiting for Masashi to draw it so he could play Cabal Therapy first and clear the way.

Keith: "Be careful with that."