Share Article
Share Tweet Share
all due respect for the American players in this Top 8, this is the Quarterfinal that tells the tale of the tournament. Two major Japanese powerhouses - soon to team-up on P.S.2 for the Team Pro Tour according to Ted "Pro Tour Trivia King" Knutson - crossed the Pacific and stomped through the Swiss before going head to head in this Quarterfinals. We could NOT pick a different match (Although the Lebedowicz-Glavin was tempting). Just don't expect any funny quotes, my Japanese is sadly nonexistent. 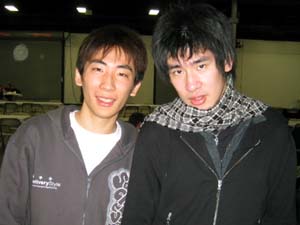 Oiso won the dice roll with a single dice - which is quite easy when your opponent rolls snake eyes - and came out with turn one Birds of Paradise, turn two Wall of Blossoms, turn three Raven Familiar. They both seemed keen on ignoring each other on this first game, each in its own little world, racing to set up the respective combo as fast as humanly possible.

Masashi found and used Cabal Therapy to destroy Morita's hand and they did something quite akward for their decks: use the combat phase. They traded pecks for a couple of turns and again Oiso found a way to up the ante. He dropped and used it to replay Raven Familiar.

But Morita had Task Force, Daru Spiritualist and Starlit Sanctum. He used it to gain a gazzilion life.

Judge: "How much did you gain?"
Masahiko: "Thirty Million."

Unsurprisingly, it wasn't enough. Oiso had Harpy and Familiar on the table. He untapped, flashed Morita a card (Aluren) and his friend scooped instead of making Masahi go through the motions of hunting for his combo and using to make him lose... thirty million life points. It was so fast, we had to ask had happened.

Morita busted out a turn one Aether Vial to start the second game, followed by Meddling Mage naming . That certainly made Oiso pause. He used Brainstorm and Wall of Blossoms to work on his hand, but the game was clearly slipping out of control for him.

In no time Masahiko Morita started pouring out his combo, piece by piece. A second Meddling Mage (naming Aluren) came in to further mess up Oiso's battle plan, in response to Cabal Therapy. Masashi was now in big trouble. His Therapy whiffed on the first try but got Morita's last card on the second try: Living Wish.

To climb back into the game, Oiso used Bone Shredder to blow up the Pikula locking out Deed, played and blew up the world. Suddenly the table was his. They both started rebuilding their game plans, Oiso with a pair of Raven Familiars, Morita with the usual of White creatures.

They had to do this carefully because every time they passed the turn might spell their own doom. Morita found another Meddling Mage and named Aluren, since another was already on the table. For a while the game fell into a lull, with Morita sending his small army in every turn and Oiso taking two damage.

Finally, Oiso stopped drawing land. He found Eternal Witness which gave him Brainstorm, which gave him . Carefully leaving mana open to blow up the if push came to shove he let his deck work its magic (pun intended).

Masahiko Morita fought on but soon Masashi Oiso was in full swing. He used Cabal Therapy to scout out any further problems and blew up the , bouncing his creatures first.

He scooped as soon he saw it, with a smile.