there were any questions as to the diversity of the current Extended metagame, you need only look at the chart below for your answers. There were more than 30 different types of decks played on Day One of the Pro Tour-Columbus. When you narrow your focus on the most-played archetypes, you can break the field down into even smaller pieces. 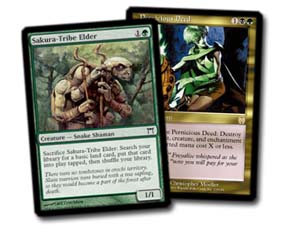 There were almost as many different Rock decks played this weekend as there were players playing it. The decks seemed to come in three flavors: green-black, green-black-blue, and green-black-red. Two things that almost all of them shared were and Sakura-Tribe Elder. Most versions were also sporting Cranial Extraction. Jeroen Remie's build was especially tasty with main-deck Phyrexian Negators.

Gabriel Nassif and several other French players had a version that touched blue for Intuition and -- anticipating the Reanimator decks that were seemingly everywhere -- Gilded Drake out of the board. Others, like Torben Twiefel, opted to splash red for and other removal spells. At least one player was attending old school with a straight-up version of Sol Malka's prototype of the deck Rock and his Millions -- with Phyrexian Plaguelord (The Rock) and Deranged Hermit (his Millions).

Goblins was all over the map, with the decks falling into two basic camps. The first was straight up Goblins with the addition of Aether Vial (although a fair number opted out of the Vial plan). The deck looks remarkably similar to the ones you played in Odyssey Block qualifiers, but with Matrons and Ringleaders to help you find your Warchiefs and Siege-Gangs.

The other half of the goblin class was a combination of Goblin Bidding or Red Army decks. The latter could fetch a Bidding (or Living ) from the sideboard along with an array of useful sorceries. Olivier Ruel was able to Burning Wish for a Reanimate to beat the blue-black deck at its own game. There were a few red-green Goblin decks -- one with Pattern of Rebirth -- and even a couple of Food Chain Goblins thrown in for good measure.

YMG was hoping that Reanimate decks would fly in under the radar for this tournament but it made up more than 10 percent of the field. Theses decks were kept separate from anything with a Sutured Ghoul as those decks are more combo-licious and try to kill you all at once. Reanimator decks look to get in three to four hits with an Akroma or Nishoba to kill you. Decks such as Cephalid Breakfast and Dancing Ghoul are two different approaches to the eggs-in-basket strategy of the combo reanimator decks.

Red Deck Wins continued to be a popular deck choice. Jackal Pups will never go out of style and red decks will never stop winning. ScepterTog was right behind it and was the first choice of the TOGIT squad, which accounts for a large portion of its players in this tournament.

Randy Buehler commented that one of the nice things about Extended is that you can pick up any deck you have loved and play it this weekend. As you roll down the rest of the list you will find many of the usual suspects. From Madness to Desire combo to Affinity (oh yeah . . .the only undefeated deck this weekend was one of the eight Affinity builds) to White Weenie, any deck that has ever been good was represented this weekend. Once you get down to the singleton deck lists it reads like a history of The Decks to Beat, with such classics as Trade Awakening, Nether-Go, and SquirrelOpposition.

It is a little too early to tell how all the decks fared, but with 98 players making it through to Day Two we should have a much better idea of what the best decks are come morning.