Desire has been a tier 2 combo deck for most of its brief history. The cards have always been good enough to captivate combo players, but it's always been eclipsed by other slightly more-broken decks in the format. It's back again this year in a couple of different varieties, and it's possible that this year it just might be the best deck in the field. Don't believe me? We'll let some of the players sitting near the top of the standings defend their choices, and then you can make up your own mind.

Sitting at the top table in round 8 was Japanese superstar Masashi Oiso. This was not unexpected, as Oiso made Top 8 in last year's Extended format, but what was interesting was the deck he was playing. Last year, the Japanese pioneered the explosive Twiddle Desire decks that used Twiddle and Burst of Energy to repeatedly untap Gilded Lotus, generating obscene amounts of mana on their way to casting lots of spells and eventually draining their opponents to death with Tendrils of Agony, often as early as turn 2.

This year, Oiso is heading the group of Japanese players running Desire, and though the deck is a little slower this year, it appears to be even more potent in the current environment than it was last year. Going into the last round, Masashi was undefeated on the day, and looking to snag one more win to put himself in an outstanding position to make another Sunday. We sat down with him to ask him a few questions about the deck, its origins, and why he's been wrecking his opponents all day long.

"This deck has no really bad matchups, particularly among the top decks in the field, so I figured it would be a good idea to run it here, especially since the format is so open," he said: "Katsuhiro Mori played it in the last Extended Grand Prix last season, and I had my own version that I was interested in playing this year. Eventually we decided that we should work together, and this deck is the result."

Q: Why did you choose the black version of the deck? What does this version give you over the White variation?
A: The white version is definitely better against the red decks in the field, because they get to play Sphere of Law. However, the black is better against practically any other deck that you will play, so that is why I chose it. The Vampiric Tutors makes the deck more consistent, and the regeneration ability of the black familiar is very good against almost all of the non-red deck. Coffin Purge is also very good against many of the decks in the field. 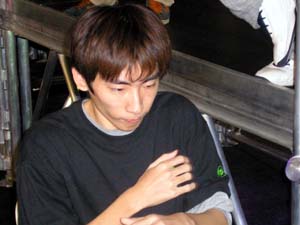 Q: You are playing Psychatog in your sideboard . . why?
A: Psychatog helps you win the damage race against Red Deck Wins. Pyrostatic Pillar is very bad for a Mind's Desire player, so this gives you a chance to win even when Pillar is on the board. It also helps you work through anti-combo cards like Rule of Law.

Q: What are the bad matchups for this deck?
A: Goblin decks are not easy. Goblins that run Pyrostatic Pillar are particularly bad, and Goblins with Cabal Therapy isn't very simple either.

Q: What are the good matchups?
A: Reanimator is a bye, and The Rock is surprisingly easy to beat as well. In fact, a lot of people don't know this because with Cabal Therapy and Duress, it looks like a good matchup but it's really not.

Q: Is there anything you would change about the deck?
A: The list is close to perfect except I would increase the number of counterspells in the sideboard.

Taking Desire in a slightly different direction is sometime CMU-TOGIT team member Morgan Douglass, a player who has had a lot of success on the Grand Prix circuit but who has yet to break through on the Pro Tour.

Q: Why are you playing the white version of this deck?
A: Sphere of Law is insane. It just wrecks the red decks, which is one reason why I chose it. You also get some versatility in the sideboard, and gain access to cards like Disenchant. Now that I'm thinking about it, maybe I should have some of those.

Q: Why do you like this deck against the field?
A: Well, I qualified with the exact same maindeck at a PTQ last season, so I'm very familiar with it and comfortable playing it. It's resilient to counterspells, has a ton of card draw, and it's very consistent. It goldfishes on turn 3 and 4 all the time, and wins on turn 5 or 6 against disruption. In fact, it's surprisingly good against most of the disruption in the field. Snap and Cloud of Faeries are a big part of the engine that lets you get extra mana, letting you cast your card draw while still getting enough spells to build your storm. I think it's really good against a diverse field.

While we've only been through one day of this tournament, Desire in the hands of a skilled player is awesome to behold. I watched numerous matches of Desire players on Thursday, and the only time the deck seems to lose is when probability works against it and the deck fizzles. Oiso hit seven lands with a Desire for eight in the final round to lose a tight game against Affinity, and Douglass fizzled for an incredible twelve playing against Red Deck Wins, giving him his second loss on the day. It will be interesting to see how these players perform with a more concentrated field on Day Two, but if I had to take a guess, I'd say there might be at least one Desire deck playing on Sunday this year.