a match that started worse than badly for Pro Tour clown prince Olivier Ruel, he must have wondered if his opponent's best creature was good enough to win with and move on to 5-0. 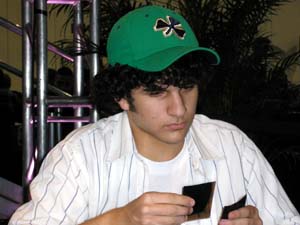 Playing Chicago's Gadiel Szleifer, Ruel could only look on in disbelief as a game 1 mulligan turned into a turn-one Rorix, thanks to Careful Study, followed by a Mox and Reanimate. The explosion left Szleifer with just one card in hand, but it was enough to take the opening game of their 4-0 feature match, with Ruel's Goblin-Bidding deck having no answers other than the much-too-slow Living Death.

For Ruel, things got worse before they got better. Taking a mulligan of his own and playing first, the 23-year-old Olivier opted to keep a six-card hand with one Swamp due to the Duress/Cabal Therapy combo, but after Duress resolved, Gadiel drew Brainstorm, throwing off the Frenchman's plans.

Olivier, badly in need of red mana, tapped on his deck and drew Sulfurous Springs. He guessed with Therapy and hit Exhume, then played Mogg Fanatic. Gadiel's turn saw Careful Study place Akroma in the graveyard with both players on two mana.

Olivier drew and played a Mox, and after an uneventful turn passed for the 15-year-old Szleifer, Ruel top-decked Burning Wish, which he cast for Reanimate -- the card Gadiel's deck was named for. With no answers in sight, Gadiel started shuffling for what would be a disappointing game 3 that saw the American sophomore mana flood as a horde of goblins ended his win streak. 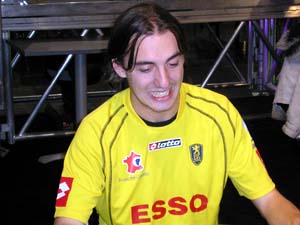 Both players placed well at Pro Tour-Seattle, with Ruel's team "Antoine Ruel" finishing 6th, while Gadiel and ":B" finished 7th. A Magic Online regular, Szleifer is one of the new breed of player who has seen the benefits of being able to play online from home.

Ruel is referred to as the clown prince due to past antics, such as bringing wind-up toys to the table and wearing a kimono at Grand Prix-Biarritz.