true Your Move Games fashion, Justin Gary showed up playing Reanimator. His teammates Rob Daugherty and Dave Humpherys are also playing the Reanimator deck. While the deck suffered the loss of Entomb from the Extended bannings, it still has been strong enough to help Gary get out to a 5-0 record -- as if $128,090 in lifetime winnings and 235 lifetime Pro Tour points weren't a testament enough to what the man has accomplished in his time on the Pro Tour. 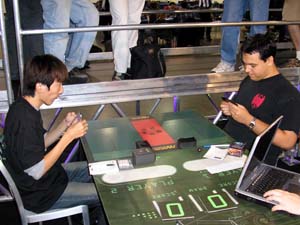 Masashi Oosio has quietly been accumulating Top 8 appearances. With three Top 8s in since Pro Tour-Yokohama, Oosio is the current leader among the Japanese in Top 8 appearances. For Columbus, he brought a Mind's Desire deck which uses Tendrils of Despair as its normal win condition.

"You got me," Gary said after losing the die roll. Ooiso decided to play first. Gary sent his first hand back as it didn't have the necessary reanimation and discard ingredients that a Reanimator deck relies upon.

Ooiso simply played an Island and passed the turn. Gary had a first-turn Putrid Imp. The Imp enabled the Reanimator deck to place fatties in the graveyard. During the end step Ooiso played a Brainstorm.

Ooiso played a second Island. Without any information except for the two Islands and a Brainstorm, Gary decided to choose Counterspell. Ooiso revealed Brainstorm, Intuition, Merchant Scroll, Deep Analysis and two lands. With the miss on Cabal Therapy, Gary lost an opportunity to cripple Ooiso's Mind's Desire deck. Gary cast a Brainstorm and attacked with the Imp. 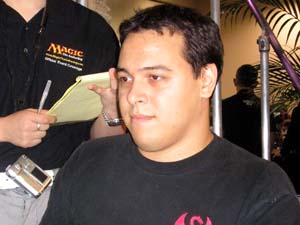 Ooiso prepared to cast Intuition by laying his third land and passing the turn. Gary realized that his Reanimator deck was facing down another combo deck, and that applying pressure would be essential. He spent his third turn discarding two Phantom Nishoba and then recasting Cabal Therapy. Ooiso responded with a Brainstorm. Gary named Merchant Scroll. Once again the Cabal Therapy missed as Ooiso revealed Cunning Wish, Brainstorm, 2 Deep Analysis and an Intuition. Gary finished his turn by using a Reanimate to bring out Phantom Nishoba.

Ooiso used Merchant Scroll to fetch Snap, which would force Gary to replay the Nishoba. During the end step Gary cast a Vampiric Tutor, and after the Tutor resolved the Nishoba was Snapped.

Gary had fetched another Cabal Therapy. Ooiso once again played a Brainstorm. Gary hadn't hit yet and Ooiso had no reason to let the Therapy strike without a fight. Shaking his head Gary named Intuition. He had finally got a hit, forcing Ooiso to discard an Intuition.

Ooiso tried to take advantage of Gary's low life when he cast a Cloud of Faeries. Gary spent multiple turns just drawing and saying go as the Cloud of Faeries continued the beats. A second Cloud of Faeries was added to the mix and Gary could only respond with, "How embarrassing."

A Cunning Wish for Coffin Purge helped lock up the game for Ooiso. His Mind's Desire deck had turned into a beatdown deck! Gary realized the desperation of the situation.

"This game isn't looking so good for me," Gary said right before he conceded.

Gary led off game 2 with the powerful Putrid Imp. He followed the Imp with a Vampiric Tutor during his upkeep. The Tutor provided a Reanimate to bring back Akroma, Angel of Wrath. The Imp and Akroma teamed up to put the Japanese player at 13 life. Ooiso Brainstormed during Gary's end step and found the Snap necessary to send Akroma home.

Putrid Imp kept swinging but Ooiso now had cast an Intuition for three Accumulated Knowledges. "Do you have time to draw those cards? You're on a clock," Gary said knocking on his Putrid Imp.

A Cloud of Faeries came down and offered the trade with Putrid Imp. When Ooiso blocked, Gary discarded his whole hand of five cards to power up the Imp to a 2/2! The crowd had never before seen such a commitment to a Putrid Imp!

Ooiso would have none of it though and saved the Cloud of Faeries with a Snap. Gary didn't seem thrilled with how the game was going

Casting a Sapphire Medallion and two Cloud of Faeries and a Merchant Scroll for the big Accumulated Knowledge was enough to satisfy Ooiso for one turn. His full hand drew a stark contrast to Gary's lack of one.

Gary topdecked Duress and chose to take one of the Cunning Wish out of Ooiso's hand of two Cunning Wish, Sapphire Medallion, Chrome Mox and Echoing Truth. Ooiso killed off the Imp with a double block and saved the Faeries with the Echoing Truth. 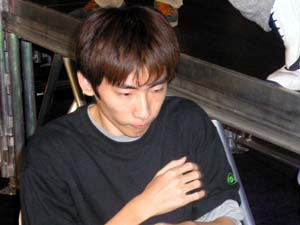 After the match, Gary commented how tough it would have been to mulligan his hand in the second game. It had offered him a second-turn Akroma, Angel of Wrath but he was aware that he would be very vulnerable to Snap. He would have much preferred to have a Phyrexian Negator and Duress draw but didn't feel as if his opening hand in game 2 was bad enough to mulligan.