a thin environment, one can build a sideboard that's ready to take on anything. In an Extended environment like the one we've seen here at Pro Tour-Columbus, fifteen slots just isn't enough to ensure a particular match up won't blow up in your face. In a pairing pitting two old masters playing their respective favorite blue-green decks, Jeff Cunningham and Deep Dog came out firing against Satoshi Nakamura and Squirrel-Opposition. 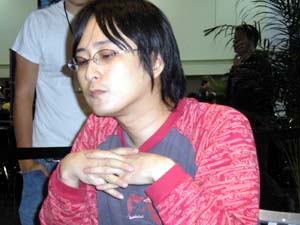 Game 1 was a mauling. With Satoshi playing first, Jeff played the highly desired Careful Study, the card Deep Dog most wants in its opening hand. The deck, named after the always insane Wild Mongrel, is designed to take full advantage of Torment's breakable madness cards -- Basking Rootwalla, Arrogant Wurm and Circular Logic. Then it wants to start discarding as fast as possible, making the one-mana Study especially efficient (this is taken a step further when you realize you want to discard Deep Analysis and Wonder, also).

Careful Study netted Jeff a graveyarded Deep Analysis, not an especially strong start, but he followed that up with a second-turn Study that allowed him to play a Mox and a Mongrel. Meanwhile, Satoshi played a second-turn Wall of Blossoms, followed by turn-three Wood Elves and Birds of Paradise, meaning he'd have at least five mana to play with on his next turn. Cunningham attacked, the Wall blocked and an angry Mongrel produced an Arrogant Wurm en route to sending the Wall to the graveyard. This exchange left "ffeJ" with one card in hand.

Satoshi's next turn saw a sixth mana source enter play, with Stroke of Genius drawing three cards. Nakamura, the most honored of players amongst Japan's elite and a father figure for Japanese Magic, drew into Opposition and deranged Hermit. 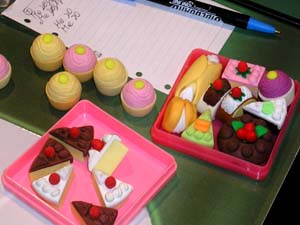 Cunningham pressed with his creatures again and cast another Wurm, but that would be his last play of the game. Satoshi cast Opposition, which allowed his three small creatures to tap Jeff's three larger ones for a turn, and when he played five more creatures in the form of Deranged Hermit on the next turn (allowing Nakamura to bust out his famous ice cream erasers), he could tap all of Jeff's permanents each turn. He followed that with another Hermit, and Cunningham knew it was time to shuffle up.

Game 2 started with Nakamura playing Birds of Paradise after Jeff played an Island and passed the turn. Another land and a "go" from Jeff saw the Bird Submerged after Satoshi drew but still inside his draw step. Instead of the Bird coming back to play, Satoshi cast Vine Trellis. Cunningham had a second Submerge waiting.

After Satoshi recast the Trellis, Jeff finally tried to get some offense going by tapping out for Wonder. Satoshi, seizing on the opportunity cast Opposition, but Jeff had his patented Daze tech waiting, a card some players more familiar with Cunningham's style may not have walked into. Of course, with Cunningham holding nothing but land, it didn't really matter. 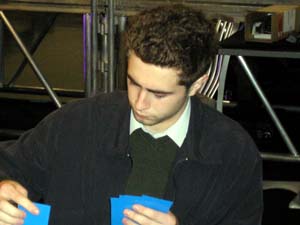 Satoshi cast Wood Elves and Birds of Paradise, after which Jeff tapped out to hard cast an Arrogant Wurm, a sure sign of a terrible draw. Satoshi knew he just had to keep pumping out the men, and did so with Llanowar Elf and a second Wall of Blossoms, which promptly chump-blocked the Wurm.

Satoshi drew Living Wish, searched for Gaea's Cradle to ensure Circular Logic would be ineffective and played Deranged Hermit, meaning the Cradle would produce 10 mana. Pretty good with the Stroke of Genius he drew the next turn. After drawing eight, Satoshi thought for a moment, but never made a decision: Cunningham finally conceded.