Tour Columbus Day One wrapped up with a bang. With so many players sitting precariously on the bubble to advance to Saturday, here's a glimpse at some of the key matches.

After time for the round had expired, Antoine Ruel sat across from Alexander Dick. Both players were trying their hardest to make Day Two. Ruel had brought a Mind's Desire deck versus Dick's Red Deck Wins. The first game saw Ruel eventually breaking out from Dick's land destruction to pull off the Mind's Desire combo. Game 2 went to Dick. 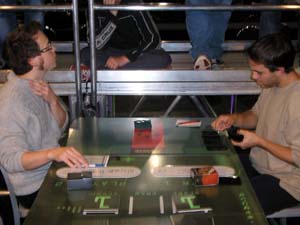 The crowd gathered as the last match for Day One came to its conclusion. Ruel was fighting to Mind's Desire combo but he was facing down a Grim Lavamancer and a Mogg Fanatic. To worsen his situation Ruel only had 2 life! But wait, the Lavamancer wasn't active because Dick had no cards in his graveyard. Each turn Ruel would try to force his combo to go off but in the end Dick ripped a second Mogg Fanatic to qualify for Day Two.

On the other side of the feature match area, reigning World Champion Julien Nuijten was battling Guillaum Wafo-Tapa of France. The first game had Nuijten with a Diabolic Edict on Isochron Scepter holding off a Treetop Village. Eventually though, Wafo-Tapa got down an Awakening which proved to be too much of an advantage for Nuijten's Psychatog deck to handle. Imagine being up one game and having to triple mulligan --Wafo-Tapa had that happen to him in Game 2. The third game saw Nuijten trick Wafo-Tapa into countering a useless Upheaval so he could advance to Day Two on the back of a Corpse Danced Psychatog. 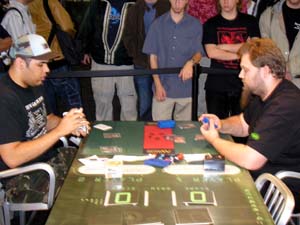 While Markus Magera of Germany and Osyp Lebedowicz waited to pass the deck check, Osyp took advantage of the opportunity and entertained the crowd. Osyp's stories of the antics of Kai Budde drew large laughs from the crowd. Unfortunately for Lebedowicz, his luck in the actual games was far worse. He didn't make the second day as Magera used from his Goblin deck to stop Lebedowicz's Engineered Plague.

To advance to Day Two, you must have at least 15 points. This was why David Rood and Tsuyoshi Ikeda had to play their match. Rood had 14 points but Ikeda only had 13. The Rock-on-Rock match up saw Ikeda winning a close match 2-1, moving on with a 5-2-1 record.

Recent Grand Prix-Austin champion Jon Sonne also had two draws on the day already. But like Rood he was paired down versus a 13-pointer, Harald Bakke. Bakke did the most that he could with his Rock deck against Sonne's TOGIT-Tog deck, but even the two Cranial Extractions and a Haunting Echoes wasn't enough to stop the newest Grand Prix champion from advancing to Day Two.

Tsuyoshi Fujita defeated John Pelcak in the red-on-red mirror match to advance. Jeff Cunningham swept Gregory Vincent, as his blue-green Madness deck was able to get past mono-red and the early game Tangle Wire brought out by Vincent. Manuel Bevand lost to Kyle Goodman's Aluren deck. Bevand managed to get out Sneak Attack out Game 3 but didn't have the creatures necessary to finish off Goodman before the Aluren combo went off.