this the beginning of the end for Kai Budde?

Last year, for the first time in what seems like forever, Budde failed to win the Pro Tour Player of the Year. In finishing a distant 8th (28 points behind winner Gabriel Nassif), Budde -- widely considered the greatest player of all time -- admits the end may be near. 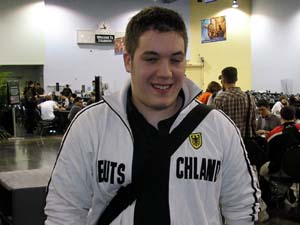 Winner of seven Pro Tours and almost $350,000 in prize money, the German Juggernaut has told friends that should he fail to make top 32 here, he'll likely skip Pro Tour-Nagoya.

"The dates of my exams haven't been announced yet, but they should be right around that time." Budde said. "I don't see much point in going if I don't see myself competing for Player of the Year."

Having put off school long enough, the 25-year-old Budde is starting to look ahead toward other things (he's studying economics and computer science). Citing the consistently long trips to the United States' west coast and Japan as other reasons for his potential departure, Kai said he'd definitely be playing Worlds and any upcoming team Pro Tours, but that non-local individual Pro Tours seemed less than likely.

Budde's reign began in 1999, when his season-ending World Championships victory propelled him to a come-from behind victory in the Player-of-the-Year race, thanks largely to three Grand Prix victories that season. After an off-year in the 1999-2000 season, he went on to win the next three titles in an unmatched period of dominance. His team, Phoenix Foundation, is universally considered the best of all time, and he is the only player to win a Grand Prix, Pro Tour, Masters, Invitation and team Pro Tour.