Evolution, according to Charles Darwin, is defined as:

Change in characteristics of biological entities over generations.

As Magic begins its second decade of play, the Pro Tour is beginning another season. Pro Tour-Columbus begins anew the cycle we've seen repeat itself nine times before this (granted, with each cycle a little different than the last). The end of this tournament will see another player with another big check and the beginnings of a new Player of the Year race. If Magic were baseball, this would be April.

As we begin this 10th year of the Pro Tour, one can't help but look at the past, from which we've evolved. The years have brought about massive innovation: the Paris mulligan, the stack, 6th Edition rules changes and other developments in the game have made it more than it once was; and in a way, the same can be said for its "biological entities" -- the players who travel from around the world to play the game.

Through time, Homo PTgamerus has changed with his (and occasionally her) surroundings. Gone are the days of the dinosaur, replaced by the monkey and now man. What follows is an attempt to explain our evolution.

In the beginning, Garfield said "let them game," and they did. He created his game Magic for his people, and one of them, Peter Adkison, was chosen to bring it to the masses. They thought dual lands and Juzam Djinns were throw-away rares, that Necropotence was the worst card in Ice Age, that Icy Manipulator read "1: tap target land, artifact or creature" and had no concept of the sequence in which the game was supposed to be played. 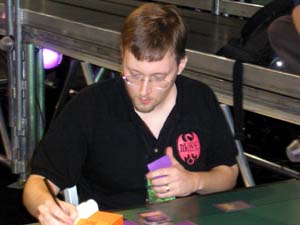 It was back then that Skaff Elias came up with the concept of the Pro Tour -- a gathering of Magic's best and brightest, coming from around the globe to decide whom amongst them reigned supreme. It started in New York, moved on to Los Angeles, and then finished that first season here, in Columbus.

Generation One were the purest of gamers, people who played anything and everything, for money or fun, with the trash talk as important as the rules, because in this land of the dinosaurs, only the strong survived. It was Magic wilderness at its best.

The names are still remembered: From Virginia came Mike Long. From Utah, Mark Justice. California produced John Yoo, Truc Bui and Brian Hacker, while on the east coast, Hammer, Mike Loconto and a very young Jon Finkel were matching their progress. The Midwest was dominated by Matt Place and Chris Pikula, while the Swedes, led by Olle Rade, dominated Europe, interrupted at times by Tommi Hovi and Jakub Slemr.

There's a lot of history in that paragraph.

For our younger readers, a world without Magic must seem alien, but for these guys, Magic was just the new fad, another good way to pass time with the boys. They took this new game and dissected, just as they had done with every game before it.

These were the guys who innovated the use of the Internet as a means of exchanging information. Newsgroup posts were the medium of choice. Constant posts from Preston Poulter, Scott Johns and Brian Weissman educated the masses: They taught the world about card advantage and mana efficiency. Weissman told the world "Play Library of Alexandria and Chaos Orb and Mind Twist. They trade for multiple cards, and that means your opponents will have nothing to trade for your other cards."

It all seems so obvious now, right? Well, its easy when you have 20 Magic websites to tell you what's good and what's not, but back then, there was nowhere to find this stuff. This was a whole new world.

Most of Gen One has long since faded away. Hovi and Pikula show up at the occasional PT, and Gen One juniors like Finkel and Bob Maher (neither of whom is here) held on for years, but most of those guys are gone. They found other games, or in some cases were forced to grow up a little, discarding the games for jobs -- and mouths for those jobs to feed. They still were possessed of the gamer spirit, but only the strong survive, They were overwhelmed by a newer kind of animal.

As word of Gen One's escapades spread with a little help from the Wizards of the Coast PR machine and the advent of the PTQ circuit, a new breed of Pro Tour player was born. Unlike the natural gamblers seeking one more adrenaline rush on which the PT was founded, this new breed of player was the student of this particular game. They saw Gen One and wanted to be where they were: getting paid to do what they loved. 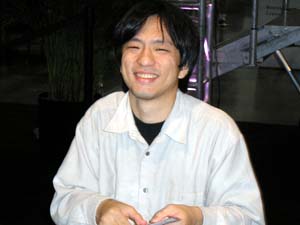 It can be argued that generation two was born to father Frank Kusimoto, owner and administrator of the Magic Dojo -- a now defunct website (most of whose archived writings can be found at www.waybackmachine.com) that took works from the best and brightest of the newsgroups and brought them to one well-organized piece of web space that allowed gamers to collate their thoughts on the game and learn from the best. Most of the writers were Gen One guys whose tournament reports contained valuable nuggets that taught the masses.

The Dojo spawned a web of Internet sites, and in doing so gave birth to the online community from which we now draw our strength. Guys like Eric Taylor, Mike Flores and Rob Hahn, non-professional game theorists, joined the Pikulas and Hackers in constant debate over how best to play the game.

This new availability of information saw profound effects, epitomized by the career of Randy Buehler. Playing his first Pro Tour, Buehler -- who holds a Masters in Philosophy -- won Pro Tour-Chicago, leading him to a drastic change in lifestyle that saw him commit himself full-time to playing Magic. He was instrumental in mobilizing the strong core of players in Pittsburgh, wrote books about the game and approached Magic with an analytical approach that replaced adrenaline-filled fun with scientific method. Buehler's approach did not go unnoticed. Within two years, he'd been hired by Wizards to work on R&D.

Buehler's example led to a new generation of professional -- players who combined winning with income from other aspects of the game to make their living. Brian Kibler, Zvi Mowshowitz and Alex Shvartsman were among those whose writing not only allowed them to concentrate fully on Magic, but also helped develop the community we have today. Their writings evolved from the tournament report to strategy on everything from deck-building to drafting, and in doing so, taught the world to play.

Across the ocean, there was a changing of the guard. Kai Budde emerged as the World's best player, buoyed by a strong core of fellow Germans. While the old Scandinavians faded away, they were replaced by Sigurd Eskeland, Nico Herzog, Raphael Levy and Team Punisher. These were players who, unlike Gen One, wouldn't water down their Magic with other gaming: they were addicts, obsessive-compulsives who needed to prove themselves superior to one another. It's that blood lust that saw Gen Two dominate the world, until technological advancement would force another shift. 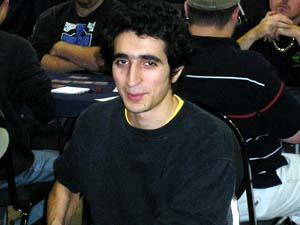 Nassif, who today is being hailed by many as the best in the world, was a new breed of player. Utilizing the advantages Magic Online offered, he became the world's most consistent Constructed player. Magic Online not only afforded him the opportunity to play more than ever before, but also gave him a huge opportunity to keep an eye on the competition, most of who were sloppy when it came to protecting deck tech while online.

Nassif, who bolstered his work with a strong group of players gathered in a consistent location (the Ostelen game center in Paris) led a new generation of player empowered by Internet technology. Magic Online afforded the opportunity to practice, and practice, and practice. Players who never before had localized peer groups that would allow them to compete suddenly had an outlet for their gaming needs. Where Gen Two had overpowered Gen One through desire, Gen three took over through work ethic and durability.

This was epitomized by the Japanese players. For years, Americans had dominated the Pro Tour, but their collective affinity for Limited left their constructed decks lacking, and while the Gen Two Europeans managed to capitalize, it was the Japanese who finally jumped on the opportunity for innovation. Time and again, Japanese players would show up with unorthodox decks and win as the Americans scoffed. As a result, there is a noticeable American void at the top -- only Eugene Harvey managed to make Top 32 at World Championships.

With players like Osyp Lebedowicz, Julien Nuijten Masahiro Kuroda and Jin Okamoto ushering in this new era, Gen Three is in full bloom. Gen Two is falling off the map -- if you can believe it, Zvi Mowshowitz, Anton Jonsson, Alex Shvartsman, Brian Kibler, Dirk Baberowski and Marco Blume are all absent from Columbus. Mike Turian retired and even the YMG old guard have all come close to falling off the gravy train. It's a new day, a new generation ready to dominate the world. . . at least until the next technological innovation brings the next wave of gamer along.

So what does it all mean? With each technological innovation, a new kind of Pro has come along and replaced its predecessors. Gone are the super teams of Gen Two, replaced by the parity Magic Online has produced. There are no easy matches at the Pro Tour any more, not like the old days, and that may mean the era of the true gravy trainer is at an end. Of course, as Darwin knew, where there is room for change, change is inevitable. It's just a question of when.