One of these things is not like the other.

Columbus, Ohio. Population approximately 730,000. Birthplace of such luminaries as golfer Jack Nicklaus, actor Tom Poston and historian Arthur Schlesinger. Ohio's capital, Columbus has the distinction of being considered the center of the United States, with 50% of the country's population living within 500 miles. Additionally, there are 436 Protestant churches, 62 Roman Catholic churches, five Jewish temples and only eight other houses of worship. Oh, and it's illegal to sell cornflakes on Sunday. You can look it up.

Columbus, like the other cities mentioned above, is also a Magic (and gaming) Mecca. For 26 years, Columbus has played host to the second-largest game convention on the planet, Origins, and it was that event which attracted Wizards to the city as a potential site for its third Pro Tour. Pro Tour-Columbus the first, held in 1996, was held along with the U.S. National Championships on Origins weekend. The result? Thousands upon thousands of gamers were exposed to high-level play for the first time. Magic would from then on be known throughout the gaming community. The weekend could only be hailed as a wild success.

Origins 1996 gave birth to the legend of Olle Rade, the diminutive Swede who would prove to be the best Constructed player in the young game -- and earning himself five top 8 finishes on Tour. Rade, noting that the only effective mass kill in Age block was Pyroclasm, built a deck based around 2/3 Spiders that were immune to the red reprint. The eight-legged freaks carried him on to victory, defeating Sean Fleishman's four-color control deck in the finals.

Meanwhile, in the juniors (this is back before the JSS, when the Junior and Master Pro Tours were played simultaneously), two friends were renewing an old rivalry. Paul McCabe, who'd finished second at PT Los Angeles, managed to repeat the feat, losing to classmate Terry Borer. Both would go on to be Masters level Pro Tour champions. U.S. Nationals, meanwhile, produced arguably the best U.S. national team ever, with national champion Dennis Bentley flanked by George Baxter, Matt Place and Mike Long (who popularized Turbo Stasis in this tournament). Necro players felt the effects for more than a year. 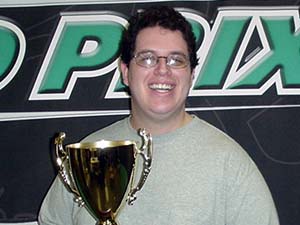 While that event, which will heretofore be known as Columbus 1, was the only Pro Tour held in the city until now, Columbus has also played host to two massive Grand Prix hosted by Mike Guptil and PES (Professional Event Services). The first of these saw Team Your Move Games storm the field, defeating the Ken Ho All-Stars to take home the big prize. Then earlier this year, it was Mike Turian, on one of many legs of his triumphant goodbye tour, defeating CMU-TOGIT teammate Craig Krempels in the finals.

Now, the new chapter is being written. Will Columbus be remembered as the beginning of Julien Nuijten's title defense? The beginning of the end for Kai? The Pro Tour where Kamiel Cornelissen was arrested for selling corn flakes on Sunday? Stay tuned to the coverage throughout the weekend. We'll keep you on top of all the action.