"I hate first rounds of Constructed Pro Tours," lamented Player of the Year Gabriel Nassif as he sat down at the feature match table.

Nassif was a finalist for last year's Extended Pro Tour, piloting his mono-Blue Clock build to a fantastic record on the weekend before ultimately falling to Rickard Osterberg in the finals. Except for Worlds in Berlin where Nassif finished in 9th, Gabriel has made the Top 8 in every Constructed Pro Tour since Houston 2002, and incredible string of finishes that has cemented his reputation as the "Best Constructed Player in the World." 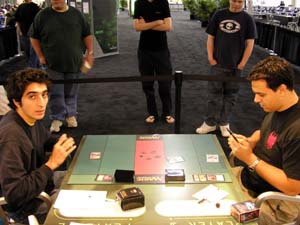 Speaking of Houston 2002, Nassif's opponent for round 1 is the champion of that tournament, long-time pro and sometime reporter Justin Gary. Justin has had some ups and downs recently, but is almost always a good bet to perform well at Extended tournaments. Talking to him before the match, he said that he was playing Reanimator in the hope that the field wouldn't be all that prepared for it. YMG is renowned for coming out with new versions of Reanimator decks year after year, and it looks as though this year is no different. The only question is whether the field overlooked this perennial powerhouse enough for the old New England team to do well with it.

Nassif is playing somewhat against type this weekend and running a Rock build that splashes blue for Intuition and Gilded Drakes out of the sideboard. Rumor coming into the tournament was that there were no great new decks to be found, and Nassif, who generally plays unconventional builds or flat-out new decks, would seem to bear that out.

Gary played a first-turn Careful Study, discarding two Akroma, Angel of Wrath, saying "Well, I laid myself out on the table... what are you running?" Nassif's Llanowar Wastes told the tale of his deck, as Gab played a Cabal Therapy naming "Exhume," whiffing on the discard spell, revealing Reanimate, a Polluted Delta, and some card drawing. Uh oh. Justin cast Brainstorm during his turn, then laid the Delta, sacrificing it for a Swamp, and cast Reanimate on the hasted Angel of goodness. Nassif stalled on one land, played a Birds of Paradise, and passed the turn before conceding in response to Gary's Duress, so that he maintained some secrecy about the contents of his deck.

"Second-turn Akroma against a land stall is okay," Gary said.

"I have a very bad habit of losing the first round," noted Nassif. "Worlds, Kobe, maybe even last year's Extended -- I can't seem to make it through the first round and get a win."

Gary's facial expressions to start game 2 were amusing, as the crowd watched him mulligan his first two hands before he chose to keep the third set of five. Nassif Duressed him, revealing a City of Brass, Brainstorm, Duress, Reanimate, Exhume, taking the Brainstorm to try and keep Justin from drawing any creatures.

Gary Duressed back, stealing a Coffin Purge from Nassif, commenting "You were ready for me!"

"I hope I'm not losing this game. That would be pretty embarrassing."

He didn't, as he tore apart Justin's hand and then beat him down with a combination of Eternal Witness and Ravenous Baloth before Gary could get any real action going.

"I put up a reasonable fight for a five card hand against Coffin Purge there," Gary said.

Game 3 started off with a Putrid Imp for Gary, and a miss on Cabal Therapy for Nassif, as he named Exhume, while Justin merely had a hand of draw spells. He mised savagely off his Brainstorm, dropping Chrome Mox, discarding Akroma to Putrid Imp, and then Exhuming Akroma into play with more than a little bit of gleeful cackling. Nassif took it all in stride though, as he merely cast Gilded Drake on the next turn to cries of "Noooo!" from Justin, before stealing the Angel of Wrath for himself. 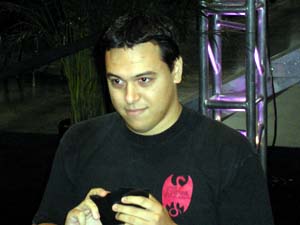 "I had to mise so hard to get that into play right there, and you just steal it!" lamented Gary. "Coffin Purgeand Gilded Drake... you were definitely ready."

Justin sacrificed Gilded Drake for Cabal Therapy, and Nassif responded by casting Intuition for two Vampiric Tutors and a Spike Weaver. Gary sent Tutor and Weaver to the bin and named Tutor with his Therapy, and then Reanimated Gilded Drake out of Gabriel's graveyard, stealing Akroma back and smashing Nassif down to five, with his own life dropping to three. Nassif played a Solemn Simulacrum in order to give himself five mana on the next turn so that he could block with Gilded Drake, cast an Eternal Witness for Gilded Drake, and then cast the Drake, killing Justin. However, on Justin's turn he flashed his toothy grin after drawing his card, cast Careful Study to give himself threshold, and beat with his team, dropping Nassif to zero.

After the match, Gary noted how much good fortune should be rewarded for his win in game 3.

"God, I was lucky there. I had to draw just right for multiple turns in order to even have a chance in that game."

Meanwhile, Nassif was clearly dejected, both from the way Justin pulled out the match, and also from getting a warning for slow play from the judge when he took about four minutes to resolve the Intuition in game 3.