Bevand brought the Krark-Clan Ironworks deck to the forefront of the Standard environment, taking the deck to a 6-0 record at last season's World Championships. His deck could only be stopped by the power of Affinity in the semifinals in San Francisco. For Pro Tour-Columbus, he brought another combo deck of his own design, Sneak Attack. 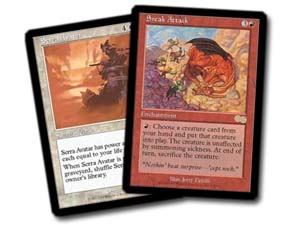 Bevand's deck can get an almost unstoppable turn-one kill: Chrome Mox, City of Traitors or Crystal Vein and Seething Song will let him cast a turn-one Sneak Attack or Through the Breach for Serra Avatar. The only answer in the entire format to this improbable draw is Foil. Of course, Bevand hasn't managed that combo yet on day 1, but Bevand claims his deck records turn-one kills between three and five percent of the time.

Ryuuchi Arita also choose to play a combo deck, but his combo involved gaining infinite life. The deck referred to as "Life" received Daru Spiritualist in Scourge to improve the combo. Using the Spiritualist, plus any one of the many en-Kor's in his deck and a Worthy Cause or Starlit Sanctum, he could gain infinite life. This is his first international event since his Top 4 team finish in Pro Tour-Seattle with Masami Ibamoto and Ichiro Shimura. He decided to play the deck after encouragement from the deck designer and teammate, Ibamoto.

Arita won the die roll and choose to play first, but mulliganed as Bevand waited patiently for Arita to reshuffle, not even looking at his own hand. 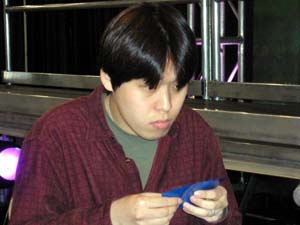 After the mulligan, Arita liked his draw enough to keep and the match began. Arita's Life deck attempted to pull off the Daru Spiritualist, Nomads en-Kor combo. Bevand started with a Sandstone Needle and Crystal Vein. With the Sandstone Needle and a Seething Song, he was able to pull off a turn-two Arc-Slogger. Arita answered with an Eladamri's Call for a Nomads En-Kor. Combined with a Daru Spiritualist -- and a ton of table slapping to activate the en-Kor -- he won the game on the fourth turn with a Worthy Cause for millions of life!

Between game,s Bevand looked to his sideboard for answers to the Life combo that Arita was running. In the first game, Bevand had no way to win the game besides dealing damage (an unfortunate goal against potentially infinite life) so he had just plain conceded. Bevand's deck could power out quick fatties as he did in the first game, but his main plan involved a quick Sneak Attack. Combined with creatures like Symbiotic Wurm or Serra Avatar, a fast Sneak Attack would prove lethal. 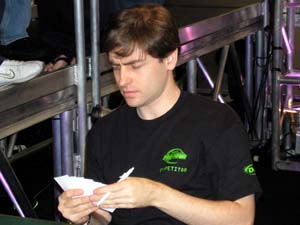 Instead of mulliganning to begin game 2, Bevand used his Serum Powder to get a new seven cards. Arita started off with a Nomads en-Kor. Bevand just laid a Mountain and a City of Traitors in his first two turns. A turn-two attack from the Nomads en-Kor received a laugh from the crowd. Arita wants to win with life, not damage!

Arita had out only two pain lands so when Bevand played a turn-three Sneak Attack, bringing out Serra Avatar. Arita couldn't even save himself with the Worthy Cause in his hand. Bevand's 20/20 Avatar ran past the tapped Nomads en-Kor who had bravely, or perhaps foolishly, attacked the previous turn. It really was a Sneak Attack!

Before Game 3 it was Bevand's turn to ask the judge a rules question. He wanted to know what would happen if neither player was able to die or deck. Since both players have ways to prevent from being decked, it could come down to both players having no way to break through. Even if Bevand was slowly attacking Arita's infinite life, the judge ruled, the game would be a draw when time expired. However, the judge did say that if they feel the game is going nowhere -- for instance if each player has a Platinum Angel in play with no other cards in hand or library -- then he could declare the game a draw.

Arita once again began the game with a mulligan. His deck was looking for specific cards and his mulligan were intended to find those cards. He laid down a turn-one Nomads en-Kor and a turn-two Daru Spiritualist and started yelling "Go! Go! Go!" Manuel gave him the slow down sign and untapped his Sandstone Needle.

Manuel looked at his hand of Sandstone Needle, Crystal Vein, Chrome Mox, Sneak Attack, Gamble, Form of the Dragon, Serra Avatar and Through the Breach and thought for a long time. Normally, this hand would have been good enough for a second-turn kill but the two little creatures on Arita's side were preventing Bevand from winning. Eventually he played just the second Sandstone Needle and passed the turn. 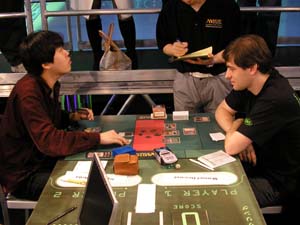 Arita used his Starlit Sanctum to gain 2,000,001 life and then attacked with his Nomads en-Kor. "2 million life, that isn't that much," Bevand responded. Bevand had no reason to concede this game because it was the deciding third game. This time Bevand was going to make Arita earn his victory.

A Symbiotic Wurm came over via a Sneak Attack and knocked Arita to only 2,000,010 life. The Sneak Attack was destroyed by a Seal of Cleansing, but the blockers that the Wurm provided were the real benefit of the Wurm. They were intended to hold off Arita's growing team of en-Kor. Two Shaman en-Kor and a Nomads en-Kor joined sides with the original Nomads en-Kor. A Living Wish for a second Daru Spiritualist allowed Arita to start beating down with his force of en-Kor.

Five of the insect tokens generated by Symbiotic Wurm bought Manuel enough time to cast a Form of the Dragon. Manuel "The Dragon" Bevand had bought himself a little bit of time, but Form of the Dragon would not prove to be enough.

Fortunately for Arita's next opponent, life totals don't carry over from match to match.