players have two things in common: They are both writers for Star City (though they have vastly different styles when they write), and they are both outstanding Constructed Magicians. Aside from that, these two players are almost as different as night and day 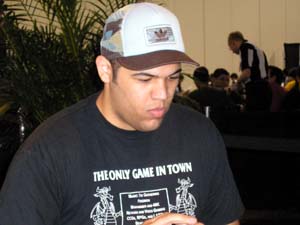 Yann Hamon, a French schoolteacher and long-time pro player, finally pulled it all together last year, finishing in the top 4 of Pro-Tour New Orleans (along with winning two Grand Prix). His hot streak petered out a bit at the end of last season, but was still enough to place him in the top 20 for Pro Tour points at the end of the year. In person, Yann is a quiet player, whose outward appearance matches his shy personality.

His opponent was none other than the unmistakably boisterous "Joe Black" himself, Osyp Lebedowicz. Lebedowicz has performed very well on the Tour since his win in Venice 2003, though most of his successes have come in Block Constructed formats. He's looking to change that this weekend by hopefully netting himself another Sunday appearance outside the commentary booth.

The deck matchup here was Classic Extended: The Rock vs. Psychatog. Hamon is piloting a two-color version of The Rock, while Osyp is playing a three-color version of Scepter-Tog. Many players feel The Rock has an advantage in this matchup because it starts with four Duress and four Cabal Therapy, in addition to playing sound answers to Psychatog in Diabolic Edict and Pernicious Deed. Though we're sure to know more about this matchup by the end of the weekend (both decks are quite popular), it looks as if Osyp will have his work cut out for him.

The first game was a grinding, 35-minute affair that saw both players take the tempo lead for brief intervals as they struggled through a war of attrition in classic Psychatog vs. Rock fashion. It ended when Hamon made a blatant play mistake by casting a Pernicious Deed with Osyp's last Psychatog on the board, but without enough mana left to either activate his Deed or his Treetop Village. This gave Osyp the opportunity to Terminate Hamon's only blocker (an Eternal Witness), and swing with Tog for exactly enough damage to kill Hamon.

After the game, Hamon was visibly upset at his mistake, since it cost him what looked like an otherwise winnable game. 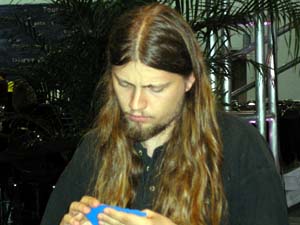 Game 2 was a much faster affair with little action from either side until Osyp played Cranial Extraction for Pernicious Deed, swiping three of the board sweepers from Hamon's hand -- but Osyp forgot to look through Yann's deck. Yep, you heard it right -- he forgot. By the time he remembered, Hamon had already drawn his card for the next turn and it was too late. It didn't matter though, as Superman (Morphling) made an appearance for the American side, and four turns later, this unusually loose match was over.

When I talked to the players after the match, they both seemed somewhat bemused by the bevy and magnitude of their mistakes in that match, though it obviously worked out better for Osyp than it did for Hamon. As for the matchup advantage that The Rock has over Psychatog decks, it certainly wasn't noticeable here.