of these Pro Tour giants came into Round 4 with 2-1 records. Ben Rubin played a blue-green Madness deck designed by Jeff Cunningham, master of blue-green Madness. Rubin said that he had made a few small changes from Cunningham's version but that it was still the same basic deck. Rubin has had four Pro Tour Top 8s but they were all more than three years ago. More recently, Rubin has experienced success at Grand Prixes, with Top 8s at both Grand Prix-Oakland and Grand Prix-Anaheim last season.

Cornelissen won the toss and kept his opening hand. Rubin's hand was excellent except for the fact that it contained no lands. His six-card hand was also lacking land but it did have two Careful Study and a Rootwalla. Even on the draw Rubin couldn't afford to risk not drawing a land and went down to five cards. 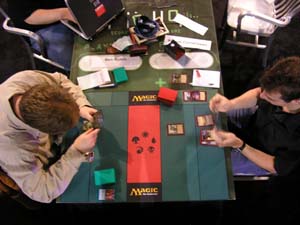 Cornelissen led with an Island while Rubin played a Forest. A second-turn Wall of Blossoms came out to defend against the normal creature rush upon which blue-green Madness relied. Currently though the Wall was the only creature in play as Rubin's double mulligan had been followed by a slow draw. Cornelissen used a Cabal Therapy on turn three to get an Intuition out of Rubin's hand. He then cast Living Wish to fetch Raven Familiar, which revealed to Rubin that he was playing Aluren.

Both players quietly sideboarded as they prepared for game 2. Jeff Cunningham came over to the feature match area after winning his match versus Itaru Ishida. Cunningham's win placed him at 3-1 on the day.

Both players kept their opening hand. Rubin started with a Careful Study, discarding it and an Aquamoba, Cornelissen played a first-turn Birds of Paradise and second-turn Wall of Blossoms. The Wall would help hold off the Wild Mongrel that Rubin had played on his second turn. 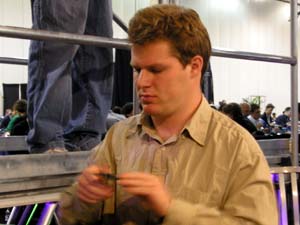 Rubin sent the Mongrel in and Cornelissen chose not to block, saving his Wall of Blossoms from the Mongrel.

Cornelissen laid a City of Brass and then cast a main-phase Intuition. Rubin thought about using the Circular Logic in his hand to counter the Intuition. One could see Rubin think about the consequences of the Intuition resolving before he finally decided to counter it. Had Cornelissen been allowed to get three Cabal Therapy, it would have devastated Rubin's chances for a comeback.

A second Careful Study for Rubin saw him discarding a Forest and a Daze. With only Yavimaya Coast for blue mana, the Daze would not be that useful. This time when Wild Mongrel attacked, Cornelissen did block with the Wall. Rubin only had two cards in his hand and trading both of them for the Wall would certainly have benefited Cornelissen.

Rubin flashbacked a Deep Analysis and attacked with his Wild Mongrel. This time Rubin did have a Basking Rootwalla and a Ray of Revelation to discard to the Mongrel, so the Wall of Blossoms went down.

Cornelissen had a second Intuition but this time Rubin had a Circular Logic waiting. Another Living Wish fetched a Meloku the Clouded Mirror out of Cornelissen's sideboard. Rubin had to read the new Legend and figure out what she meant to the game state. Rubin hadn't been worrying about his life total but all of a sudden his 8 life mattered. Rubin had been unable to find an Island all game and Yavimaya Coast was wearing away his life total at an alarming rate.

Once again Rubin went into the think tank. With Cornelissen at 15 life, Rubin needed to do a lot of damage, and finally he sent over a pumped Basking Rootwalla and a Wild Mongrel to put Cornelissen on 10. After the attack Rubin played an Island, a second Wild Mongrel and an Aquamoeba.

Each turn was a multi-minute affair as each decision became more crucial to the result of the match. Cornelissen had four cards in his hand. He played the Meloku the Clouded Mirror and made an Illusion.

Rubin had four attackers and two cards in hand ready to go on his turn while he figured out the best way to attack. Finally, Rubin decided to just attack with the two Mongrels. Cornelissen decided not to block, which meant that he would go to at minimum of 5 life. Before the end of the turn Cornelissen used Meloku the Clouded Mirror to make two more fliers. Cornelissen only had a Forest in play for land.

Cornelissen decided to Flashback his Cabal Therapy, sacrificing a Birds of Paradise. Rubin responded with an Intuition for Deep Analysis, Deep Analysis and Wonder. Cornelissen named Wonder, leaving Rubin with just an Island in hand.

Cornelissen played out a Raven Familier that found a Soul Warden, which also came into play. The life totals were Rubin 7, Cornelissen 3. Cornelissen's City of Brass had dealt a lot of damage to its owner over the course of the game.

Rubin sent in his whole team -- two Wild Mongrels, an Aquamoeba and a Basking Rootwalla. Since Cornelissen was at only 3 life, he was forced to block all four of the attackers. A Raven Familiar that hadn't been upkept yet and two tokens were used as chump blockers while Meloku the Clouded Mirror stopped Aquamoeba. Rubin passed the turn. 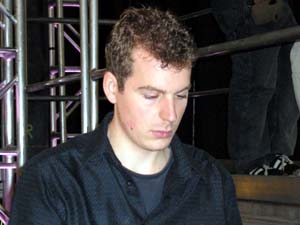 Rubin sent in only his two Wild Mongrels, leaving Basking Rootwalla and Aquamoeba back to stop the potential counter attack. Cornelissen created another chump blocker, going up to 5 life, and then chump blocked with his Birds and a token. During the attack step there was some confusion when Cornelissen cast Brainstorm. He appeared to have placed the cards on the bottom of his library thinking it was a Raven Familiar. As Rubin didn't have enough blockers, the mistake was both quickly fixed and irrelevant; Rubin extended his hand, as the swarms of Illusions were about to finish him off.