West was 11-3 coming into the round and needed one win to likely make Top 8. He was paired down against Adrian Olivera who was 10-4 and was out of losses to give to have any chance of securing a Sunday appearance.

Nicholas West is an English player participating in his first Pro Tour after winning a local PTQ with his Mono-Black Beatdown creation. The deck featured Blind Creepers, Nim Shriekers, and Disciple of the Vault. It was an unusual home brew… and so is the deck he is playing this weekend--a Blue-White Scepter Control deck that he had built last December during the PTQ season. It kept losing to Tinker and he shelved it. Nicholas decided to dust it off and see how it would fare in the post Tinker environment. The early returns were promising, and he has been testing the deck non-stop for the past three months. 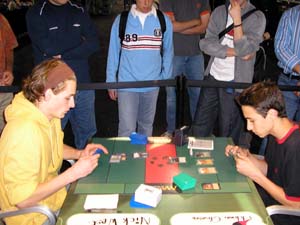 West's deck features Meddling Mage, so it was not just idle chatter when he learned his opponent was from Spain and asked Adrian Olivera, "So did you come here with those guys playing the Cephalid ist deck?"

Adrian was not only with those guys--he was one of them. Like West, he was playing in his first Pro Tour after winning a local Qualifier. When the Hermit Druid banning went into effect, Olivera and his friends were not prepared to give up the deck and came up with the ist/En-Kor combo to replace it. They played the deck throughout the remainder of that PTQ season and when they qualified for this event during a subsequent round of PTQs, they decided to give it a go in the big leagues.

Adrian played the first part of his combo on turn two--a Nomad En-Kor. Nicholas made it difficult for him to complete the combo by putting down a Meddling Mage on Cephalid ist. Olivera Tutored at the end of his turn for a Gilded Drake and cast it to take the Mage. West beat down with the flier and the Spanish player tutored again--this time for Cabal Therapy.

West Brainstormed in response to the Therapy and the Spaniard thought long and hard about what to select. While Adrian squirmed and fidgeted, the Englishman waited patiently with his chin resting on his intertwined fingers. Finally Olivera announced Mana Leak. He saw two Isochron Scepters, Counterspell, Fire/Ice, and . He could only imagine what West had tucked away safely on top of his deck.

He flashed the spell back and took the Scepters. With that Meddling Mage out of the picture he played the ist. He began to flip his deck over three at a time. One of the nice things about the Cephalid combo is that you don't need to dump your whole deck. Olivera kept going until he found the pieces he needed. He sacrificed the ist to nab the Counterspell with another Cabal Therapy that had been binned and he took the .

West drew the Counterspell he had saved for just this rainy day and used it to dodge an Exhume for the game on the next turn.

Olivera opened on an Aether Vial while a Mox powered out a turn one Meddling Mage for West. He named 'Reanimate.' Despite the absence of Hermit Druid, the deck still plays all the wacky non-basics to support a spectrum of cards that includes Krosan Reclamation, ist, Krosan Reclamation, and the En-Kors. Olivera had a City and Tarnished Citadel in play on turn two when he played a Birds of Paradise.

West had the second Mage and set it on 'Exhume' on the next turn and Olivera Vialed out Nomad-En-Kor. He untapped to put a second counter and then played another Vial. He Worldly Tutored up a Phyrexian Negator and summoned another En-Kor . His lands had him down to fifteen.

West passed the turn and Olivera flashed out an ist. At the end of his turn West announced a Cunning Wish, "I wish I had an Enlightened Tutor." He then Tutored for Scepter and untapped to play it with an imprinted Fire/Ice. He was out of cards but things were starting to look grim for Olivera who passed his next turn with only a third Vial to show for it.

Olivera's Worldly Tutor put an Uktabi on top of his deck and used it on his next turn off of the Vial. He was also able to Vial out the Negator. A turn later he served for seven with his non-combo men and West fell to twelve. He d the Negator on the next turn but fell to ten from the orangutan.

He went back to serving for seven and West dropped to three. The Englishman was holding an Orim;s Chant and Brainstormed into Scepter on his next turn and put down the lock. During Olivera's upkeep he kicked the Chant off the stick and the Spaniard could not do anything save say, "Go."

This went on for a couple of turns until Olivera put his hand up at the end of West's turn to attempt another Worldly Tutor. When West Counterspelled it the Spanish player extended his hand and wished West luck in the Top 8.