title of World Champion can bring with it an intimidating swagger. Julien Nuijten, all 15 years of him, is a kid who brought attitude to the table before any of us knew his name -- so now his diminutive shadow looms even larger. Unfortunately, such lights and tricks don't work on the beast that is the "cagey veteran," a label that defines Tsuyoshi Ikeda to a tee. With two Sunday finishes to his name, it's going take more than a little talk and a title to take him out before the cards come to play. 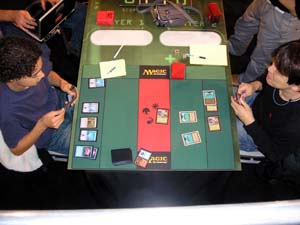 The match pitted newer variants of classic archetypes, with Ikeda sporting a version of the Rock that utilizes Yavimaya Elder, Eternal Witness and Sakura-Tribe Elder for mana and card advantage. Nuijten was running Tog, complete with Accumulated Knowledge, Brainstorm, Fact or Fiction and of course, Upheaval.

After Julien won the flip, he had a tough decision on his hands right off the bat, with Chrome Mox, Mana Leak, Brainstorm, Fire/Ice and Isochron's Scepter in his opening hand to go with Island and Polluted Delta. He chose to play the Island and pass the turn, the assumption being he wanted to see what Ikeda was playing before committing one way or another to the Scepter. The flaw in this logic came on turn two, after Ikeda played Birds of Paradise, when Julien Brainstormed into three more Islands, untapped and imprinted the Fire/Ice that many would want for the Scepter, onto his Mox.

After Ikeda played Treetop Village and two more Birds, Julien added to the questions, casting Cunning Wish (after shuffling his library), looking though his sideboard before opting for the removed Fire/Ice, making the Mox useless. He cast the Scepter and tapped out to kill two Birds immediately, so Ikeda Vampiric Tutored, untapped and cast Living Wish for Viridian Shaman.

Suddenly Julien, who lost round 1 yesterday and had no caffeinated products this morning, was stuck at two cards in hand, staring down multiple Treetop Villages and Sakura-Tribe Elder. Drawing a Psychatog with no black mana sources didn't help much either, and after one more round of beats, he started shuffling for Game 2. 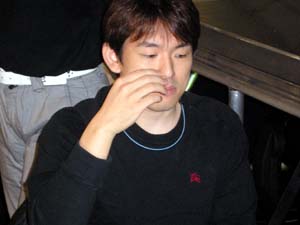 An Ikeda mulligan gave Julien a needed momentum boost, but his deck was reactive enough that it was still Ikeda who had to come out swinging. Turn-one Birds were joined in paradise by Sakura-Tribe Elder, and with the resulting mana build-up, he played a turn-three Cranial Extraction, which Julien successfully Mana Leaked.

With Nuijten content to merely draw and pass turns, Tsuyoshi did most of the playing. He next cast , which resolved, followed by another Elder. All of this while Julien waited patiently for a chance to use the Daze in his hand. Unfortunately, as former PT player Matt Vienneau was fond of saying "There are good Daze, and there are bad Daze," and Brainstorm afforded the kid the opportunity to give up on the good.

With Ikeda running low on cards, Julien cast Living Wish for Fact or Fiction, countering Cranial Extraction before managing to cast it with Tsuyoshi sporting two Treetop Villages and no cards in hand. It wasn't much of a race, with Julien finding Cunning Wish, using it to Vampiric Tutor and casting Upheaval a turn later. Psychatog did the trick, taking the 5-2-1 match to a third game. 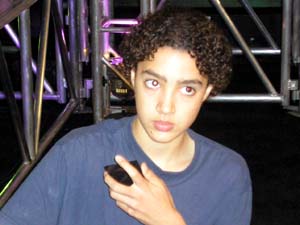 Game 3 was anti-climactic. Ikeda once again mulliganed, and with nothing else to do, attacked with Treetop Village on turns three and four, a sign of extreme weakness. Julien, meanwhile, started drawing cards: He cast all four Accumulated Knowledges and a Fact or Fiction in the game. With Ikeda barely threatening the Dutchman, playing land after land, Julien went on the offensive. He Cunning Wished for Corpse Dance, then Intuitioned for Psychatogs with Upheaval in hand. He didn't NEED to Upheaval, but he worried that Ikeda would Smother a pumped 'Tog, so he did it anyway. Tsuyoshi could only smile and shake his head, then extended his hand in concession.