the 2005 season now 14 rounds old, there are a lot of new names showing up at the top. So many, in fact, that the old familiars aren't seeming so familiar, with two exceptions: Olivier Ruel and Masashi Oiso. As the game at its highest levels appears to be striving for parity, these two monsters are doing their best to represent the old guard. 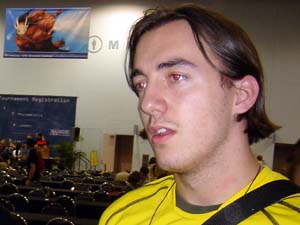 While Kai Budde and Gabe Nassif failed to make Day 2 (while Anton Jonsson and Jon Finkel failed to appear for Day 1), Ruel, playing Goblins, is the old-school player in the best position for a Sunday appearance. Making his Pro Tour debut in 2000, Ruel was originally known as a teams specialist. Working with brother Antoine and longtime buddy Florent Jeudon, Ruel's Black Ops appeared in a precursor to the Masters at Pro Tour-New York that year, with the unknown Frenchmen escaping unscathed from a field of better-known American teams with the victory. The teams-only perception was altered at Pro Tour-Osaka in 2001, where he finished second, leading to a string of successes that have continued up to the present.

Oiso, meanwhile, could still be defined as "new" to the Pro Tour, having served just two years of duty. The Rookie of the Year for the 2002-03 season, Oiso became a household name among PT watchers when he finished second at Pro Tour-Yokohama last year, taking home $20,000 -- since then, he's climbed through the ranks, earning the respect of his Pro Tour adversaries and Japanese colleagues alike. It's with Oiso, playing Black Desire, that the familiarity ends.

Yes, World Champion Julien Nuijten and his 'Tog deck are still technically in contention, but let's not forget this is still a 15-year-old newcomer. Geoffrey Siron's name shouldn't be entirely unfamiliar to readers, though it'd be a lot more familiar if the tiebreakers hadn't left him in 9th at Pro Tour-Osaka. Dave Humphreys, the YMG mainstay, is down the list a bit, with his four losses meaning he must win his last three rounds for a shot at Top 8, but other than that, you may not know these guys.

Here's a quick look at those players you probably haven't heard of before this weekend:

Gadiel Szleifer, who is leading the field, finished seventh at the team PT in Seattle last season. Playing Reanimator, the 15-year-old Chicago native appears ready for his first Sunday appearance.

Joining Szleifer at the top of the standings is French rookie Pierre Canali, the lone remaining Affinity player, who we're fairly certain would be the first salsa dance teacher to make Top 8 (though Darwin Kastle has taught ballroom dancing). 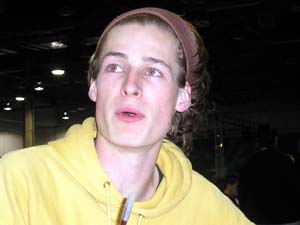 Nicholas West is a 23-year-old Englishman playing one of the more original decks in the tournament -- "No Stick," a blue-white control deck Brian David Marshall described as 'Tog without the Togs.'

Ryuichi Arita is a 27-year-old restaurateur who's been to a few more PTs than most of these guys, even managing a Sunday appearance with S.A.I. in Seattle, but even he could only answer "FNM Champion" when asked for his Magic accomplishments.

Semion Bezrukov is a 25-year-old defense contractor whose two front tires exploded on the road trip here, still managed to make the trip and qualified through Thursday night's LCQ.