you ever looked at a Pro Tour deck list and tried to figure how in the heck it wins? Anytime a combo deck gets posted on the Internet, it is invariably followed by a deluge of emails and forum posts from players trying to wrap their minds around how it works. When we were entering decklists in the coverage room and got our first look at the Cephalid Breakfast deck, strictly on paper it caused us to scratch our heads.

Combo decks are especially tricky to understand, and even when you do understand them they are even trickier to play. We have isolated a few of the more successful decks from this weekend's action and asked the players themselves to demonstrate how the deck works given an ideal draw. We have also asked them to give examples of hands that they would keep in tournament play and ones that they would pitch back. This advice could prove very useful if any of you out there consider playing these decks in the upcoming Extended PTQ season.

One of the big stories this weekend has been the success of Reanimator decks. Many people considered the archetype to not be Tier One coming into this event after the banning of Entomb, and the deck was not played much at the last Extended Pro Tour. Of course, there were plenty of other broken things to do for that tournament, and since that event most of those things have been put on the banned list as well.

A few different teams turned to the deck for this event. Even though it could not Entomb an Akroma, all of the ways to bring her back remained legal. Careful Study, Cabal Therapy, and Putrid Imp provided ample discard outlets. The Reanimator player with the most success on the weekend has been 15-year-old Gadiel Szleifer. Gadiel sat down with Jonathan Becker and ran the deck through its paces (4.5 MB zip).

Reanimator was tied with Goblins for the most played deck on Day 2, but Gadiel had yet to face a mirror match. He was confident that he had the sideboard tools necessary to win the mirror citing Phyrexian Negator as the source of his confidence.

Another deck that was overhauled after the last round of Extended bannings was Angry Hermit -- the deck Bob Maher piloted to a Top 8 finish at Pro Tour-Houston. The original deck relied on using a Hermit Druid to dump the entire deck into the bin and then put a reanimation spell on top of its library and then make a hasty Sutured Ghoul that is bigger than its opponent's life total.

With Hermit Druid exiled to Type 1 and 1.5, players had to find another way to flip their library into their graveyard. A group of Spanish players discovered a two-card replacement for the effect and found it in the obscure Cephalid ist. With any En-Kor creature they could target their squid over and over and produce the same effect as the Hermit Druid.

They played the deck during the last Extended Pro Tour Qualifier season and when six of them were qualified for this event they decided to break the deck out here. Two-thirds of them advanced to play Saturday and David Carvajal found himself in 12th place when he sat down with Becker to show off the Spainards' creation (6.0 MB). This will certainly be an important deck to keep an eye for on a local level. 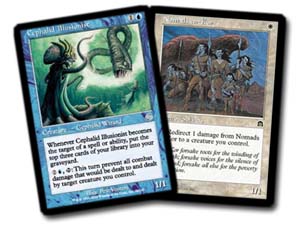 One of the more intriguing combo decks to emerge this weekend has to be the Loop Junkatron, or deck, that is being played by Ryuichi Arita. The deck was originally designed my Masami Ibamoto and popularized by Akira Asahara when he made the Top 8 of Grand Prix Okayama with his good friend's creation. Arita was near the top of the standings Friday and continued that strong play into the Top 8.

This deck is the is the gold standard for undecipherable deck lists, as there does not appear to be any real way to kill your opponents -- unless you count Test of Endurance. Most players will just scoop it up if the deck gets its combo off, since the Junkatron-wielder will be at infinite life. Like the previous deck, Loop Junkatron features the En-Kor bunch so start dusting those puppies off for the next PTQ season. Can't fathom infinite life? Take a look as Becker walks the deck through its steps (5.7 MB zip).

It is still too early to tell which decks are going to emerge as the top dogs from this event but if it is any of these three you can't tell me that you don't know how the deck works this time. And, come to think of it, I don't want to hear about you keeping any bad hands either!