players came into the match at 8-1 with six rounds left to play. Masashi Oiso brought a Mind's Desire deck that splashes black for Vampiric Tutor and scape Familiar. After sideboarding, he has the ability to bring in Psychatog although that seems unlikely in this matchup. 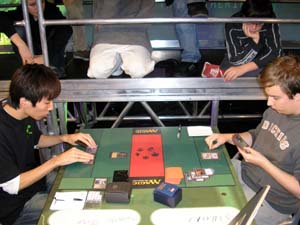 On the other side of the table sat Geoffrey Siron. At this year's World Championships his 23rd-place finish led the Belgian National team into the Team Finals. Another strong finish at this event and Siron will have solidified himself as a rising European star. Siron brought a traditional blue-green Madness deck to Pro Tour-Columbus.

Osyp came over at the start of the feature match yelling, "Masashi's going to win the Pro Tour. His deck is so good!" A smile briefly crossed Masashi's lips before he went back to shuffling.

Oiso began the match with a mulligan and then an Island after his second hand was acceptable. Siron also laid an Island but had a Careful Study to go along with his. The Careful Study put both Wonder and Deep Analysis into the graveyard for Siron.

Oiso played a second-turn scape Familiar, Siron bluffed at Daze saying, "Wait, it's on the stack," before letting the Familiar resolve. Siron played out a second-turn Wild Mongrel to get some beat down going.

Oiso started his third turn with a Brainstorm. and then an Intuition for Accumulated Knowledge. Siron, meanwhile, played another Careful Study, discarding a Forest and a Chrome Mox, before sending his Mongrel in for two.

When Oiso attempted the Accumulated Knowledge it was met with Circular Logic. Oiso spent a lot of time considering his next move; eventually he decided to do nothing else and just passed the turn.

Siron played out an Aquamoeba and attacked with the Mongrel again.

Oiso started to go off by playing a Cloud of Faeries, then a Cunning Wish (fetching Snap). He Snapped the Faeries and recast followed by an empty Chrome Mox, all preparing for a Mind's Desire for six. He flipped up Deep Analysis, Merchant Scroll, Cunning Wish, Vampiric Tutor, and two lands.

Oiso played one of the lands and used the Merchant Scroll to get a Snap. Snapping the Cloud of Faeries and recasting slowly began untapping some of his lands. A Cunning Wish for Brain Freeze would prove almost lethal without any additional spells. Oiso did cast the Deep Analysis and the Vampiric Tutor. After a Brainstorm he Snapped the Faeries and recast them one last time. A Brain Freeze targeting Siron in response to a Deep Analysis targeting Siron ended the first game.

The black addition to the Mind's Desire deck is a new twist that hasn't been seen in large tournaments until this weekend. The single scape Familiar let Oiso abuse the untap mechanic enough to create a small Mind's Desire while the Vampiric Tutor off of the Desire let Oiso top-deck the perfect spell.

Each player started the game with an Island but Oiso had a Chrome Mox and a Sapphire Medallion. The Medallion was Dazed but returning the Island to his hand set Siron back an entire turn.

Oiso used his free turn to cast a Merchant Scroll for Intuition, while Siron finally got in the game with a Wild Mongel. Oiso's third turn saw him casting the Intuition to fetch Accumulated Knowledge. 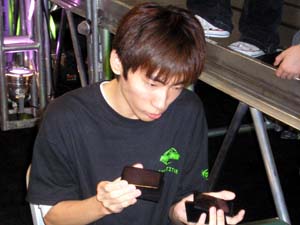 Siron attacked with the Mongrel and madnessed out a Basking Rootwalla. He then played a Thought Courier and Dazed an end step Brainstorm attempt on Oiso's part. Oiso untapped and went for a three-point Accumulated Knowledge but Siron discarded the rest of his hand to power up a Circular Logic. Oiso only had one card remaining when he finally resolved a Sapphire Medallion.

Siron sent in the beats for five. Oiso drew a second Brainstorm and you could tell that Siron wasn't happy. Oiso didn't have any other plays.

Siron started his turn by looting away a Wonder. He then sent the Mongrel and Rootwalla into the Red Zone. After Siron pumped the Rootwalla, Oiso Cunning Wished for an Echoing Truth and sent the Mongrel home. He took three damage down to 9. The Brainstorm must not have been that powerful, otherwise Oiso would not have to take such a defensive measure.

When a Merchant Scroll fetched the last Accumulated Knowledge Oiso had a chance, until Siron played Circular Logic on it sealing up the victory.

Oiso led with and Island while Siron had a Forest. When Oiso tried a second-turn Chrome Mox, Siron hit it with Oxidize before the Imprint even resolved. This could have but didn't prevent Oiso from getting off an Intuition the very next turn. Siron made an Aquamoeba followed by a second Aquamoeba during this time. Oiso Brainstormed during his main phase.

Siron just sent the two Aquamoeba and passed the turn. He had all the threats out he needed. When Oiso tried an Intuition, Siron responded with an Intuition for Daze. The Daze shut down Oiso's Intuition.

Siron send in his Aquamoeba's again flipping both of them. On the end step Oiso tried a Turnabout to tap out Siron. Siron had two Circular Logics as his only cards in hand and decided to use one on the Turnabout.

Oiso made a face when his Accumulated Knowledge was countered by the second Logic but fought back with a Snap on an Aquamoeba and a Cunning Wish for a Stroke of Genius. All of Siron's hopes rested with his two Aquamoeba's flipping away.

Oiso drew a Merchant Scroll and fetched his fourth Accumulated Knowledge. Now his hand was back up to five cards. Siron swung in for 4 but Oiso began to go off.

A Sapphire Medallion and two Cloud of Faeries allowed for a four-point Desire. The four-point Minds Desire gave Oiso two more Mind's Desires! His second Desire for six gave him his very last Mind's Desire! The third Desire was lethal for Siron when it revealed Tendrils of Despair.