one of the most wide-open environments in Pro Tour history, the Columbus metagame was a mystery when we started Friday morning. Some said Reaminator was the best deck, some insisted Rock, RDW2K4, Tog…the list goes on, and the correct answer was anybody's guess. But now, the data is in -- the reanimated are better than the animated. This matchup was an example of that. 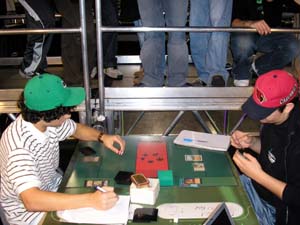 Gadiel Szleifer, at 8-2, is playing Reanimator in its purest form. Only 31 players brought the deck to Columbus, with 16 making the cut -- an astounding Day 2 conversion rate. His opponent, Javier Dominguez, is one of just six players who brought Cephalid Breakfast, an offshoot of Angry Hermit to the tournament. Four of the six made Day 2, leading one to wonder if it's the player or the deck.

Game 1 started with Javier playing Forbidden Orchard followed by a main-phase Brainstorm, a fair play considering his opponent could well be playing Force Spike (more on this later). Szleifer cast Duress on his first turn, but couldn't do anything to follow as the one Swamp he'd started out with would be his only land until turn four. Dominguez, seizing upon the opportunity, started chasing victory as sloppily as possible.

Cephalid Breakfast is designed to get out Cephalid ist with one of its many En-Kor creatures, which endlessly target the ist, putting the entire deck in the graveyard, at which point the player can play Krosan Reclamation, get back Reanimate or Exhume, get a huge Sutured Ghoul into play and attack for the win. 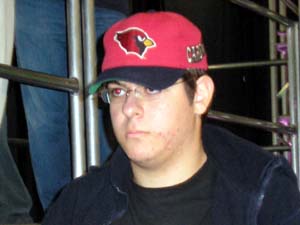 With Gadiel land-light and hand-deprived, Javier made the conscious decision to put just one card on his library with the Reclamation, verifying for Gadiel that Reclamation read "up to two cards." Gadiel could only shrug and Cabal Therapy himself for Akroma to go with six 1/1 tokens thanks to the Orchard. Javier cast the Exhume and the Ghoul made it to 28/28, large enough to do precisely lethal damage, while three Birds of Paradise remained in the graveyard -- but should Gadiel have drawn a trick that stopped even one point of damage, Javier would have gotten decked instead of just attacking a second time for the win.

"This is a rivalry," remarked Szleifer, 15, as he shuffled for Game 2. "We played in Seattle." Gadiel won their first match up as ':B' (his team) advance to Day 2, eventually finishing seventh.

Game 2 was all Gadiel. Javier mulliganed then could only wince as the Chicago native's Duresses and Cabal Therapies ripped the Spaniard's hand to shreds. Things got desperate enough that Dominguez had to play out a morphed Krosan Cloudscraper and begin administering beats with it. Szleifer kept with the disruption, and Javier kept drawing one bad card after another, eventually putting Dragon Breath on the Cloudscraper instead of his Birds of Paradise. Finally, Gadiel drew the Reanimate he'd been looking for, went to one life and attacked with Akroma. "No top decks!" Szleifer yelled. He was right. 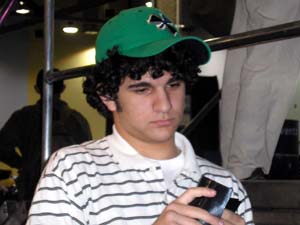 Game 3 began with Javier once again starting with the main-phase Brainstorm, but this time there was no excuse. He knew his opponent was playing both Duress and Cabal Therapy, and should have waited until end of turn. Fortunately, the misplay didn't hurt him as Gadiel had no discard until turn two, when Cabal Therapy followed out Putrid Imp. The Therapy missed the first time, but the flashback left Dominguez with one land in hand. The top-deck race was on.

Dominguez's draws left much to be desired as the next five turns produced four land and Nomads En-Kor. Gadiel wasn't doing that much either, but he'd played a second Putrid Imp and threshold allowed it to do two a turn. The countdown was on: 14…12…10…8…6…

The next draw step did nothing to help Javier's chances, and when Gadiel drew and cast Reanimate for Akroma, the two shook hands and the match was over.