during round 8, Nuijten asked about getting a real feature match. Well, when you are the reigning World Champion one thing you should get used to are lots of feature matches. He had one earlier Saturday in round 9 and was about to have another this round. While Kamiel Cornelissen isn't the World Champion, he has certainly become accustomed to the feature match area. When the round ends, it is usually Cornelissen who ends it --he has received the reputation as being a deliberate player and his 7-2-2 record reflects this. 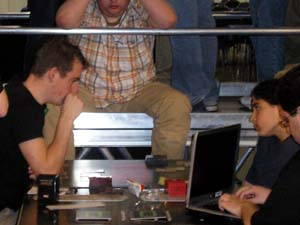 Nuijten has one less point with a 7-3-1 record but for both players, this round is do or die. While both could easily make money, with any more losses they won't be able to make Top 8. For Nuijten a loss would deny him the chance for back-to-back wins.

A deck check delayed the start of the match so the two chatted away while waiting to get their decks back. They had tested the format with one another while preparing for the event. After they got their decks back, Cornelissen noticed that the judges had given him back a different deck box. He sent the judge back to go retrieve the correct box before the match began.

Nuijten was playing a Psychatog deck with red while Cornelissen had brought Aluren to the tournament. Nuijten should have the advantage in the matchup because of the heavy control elements in his deck.

With two mana untapped, Nuijten imprinted an Isochron Scepter with Counterspell. Cornelissen played a Cabal Therapy that Nuijten didn't stop and named Intuition. Nuijten revealed two Accumulated Knowledge, Fire/Ice and a land so Cornelissen had missed. Cornelissen flashbacked the Therapy but Nuijten used his Scepter to protect his hand. With an open door Cornelissen played down Aluren and passed the turn.

Cornelissen didn't play anything during his turn, once again, and on the end step Nuijten tried to use the Isochron Scepter to draw three. Cornelissen responded using Aluren to sneak another Wall of Blossoms into play.

Nuijten used his Scepter main phase to get three new cards. Cornelissen tried an Intuition but Nuijten had Mana Leak for it.

Nuijten seemed to have an endless stream of cards to bring in for the matchup. Post-sideboard, it will be interesting to see if Cornelissen has any way to fight control. 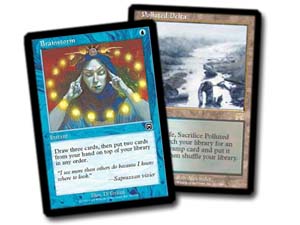 Cornelissen led with a Polluted Delta and played a second-turn Brainstorm. Of all the mondo-combos in Magic, for a tournament player nothing is sweeter than Brainstorm with an Onslaught sac-land. A Cabal Therapy on Cornelissen's part missed the dreaded Isochron Scepter but it did show Arcane Laboratory perhaps a card even more feared by combo decks.

Cornelissen played another Brainstorm on his turn, most likely searching for a way to knock the Laboratory out of Nuijten's hand. Instead Cornelissen just played a land and passed the turn. Nuijten cast Accumulated Knowledge for a single card.

Nuijten cast Arcane Laboratory on his own turn while Cornelissen played an Aluren on his. With Aluren in play casting spells became a little tricky for Nuijten as well. Cornelissen got a Raven Familiar into play at the end of Nuijten's turn. When Cornelissen tried to bounce the Familiar with a Nuijten d the Familiar. 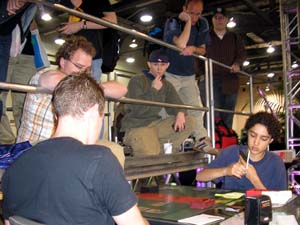 Only Soul Warden was coming over at Nuijten acting as a very slow clock. Nuijten killed the Soul Warden with a Fire/Ice.

When Cornelissen played an end-step Soul Warden, Nuijten used the opportunity to cast a Brainstorm. The three one-power creatures knocked Nuijten down to 5.

Nuijten started to tapped all of his mana, floating two, and played an Upheaval followed by a Psychatog and a Chrome Mox. Cornelissen cast a Birds of Paradise to chump block the lethal Psychatog. When Nuijten Mana Leaked a Wall of Blossoms, Cornelissen had no way to stop the Psychatog from eliminating him from Top 8 contention.