Garza has been making the climb from JSS Player to Pro this year. He won the JSS Championship at US Nationals this year, and followed it up with a victory at his first major event. Jeff defeated Brian Kibler in the finals of Grand Prix New Jersey to earn his invite to this tournament--his first appearance on the Pro Tour. He and Mike McGee spent all of Thursday lurking about the tournament site trying to glean information about what deck they should play, and after much research, they settled on a Reanimator build finalized in the wee hours of the evening before the tournament. Coming into this round Jeff had piloted the deck to a 9-3 record. 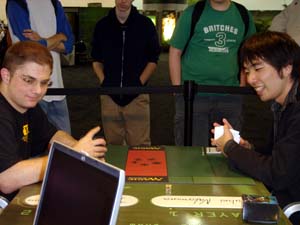 His opponent was Japan's Shuhei Nakamura who was playing Red Deck Wins as designed by Tsuyoshi Fujita, Osamu Fujita, and Masashiro Kuroda. Although he has not made a name for himself yet on the Pro Tour, Nakamura has the support of the strongest Japanese players. He consistently finishes in the Top 8 on the Japanese Grand Prix circuit, and with a 9-3 record coming into this round, was hoping to replicate that success on the next level.

On paper the match-up favored Garza, as Akroma is pretty good against a Jackal Pup, although the threat of Ensnaring Bridge after sideboard played on Garza's mind, evidenced by his muttering.

Garza, a dour young man if there ever was one, slumped when he lost the die roll, "I'm trying to remember if I won a game where I went second."

Shuhei led off with Pup, and Garza agonized over how to play his turn, opting to merely play a Swamp and brace for two from the Pup, and another two from his Vampiric Tutor at the end of the Japanese player's turn. Shuhei had only a Wasteland for his second turn.

Careful Study off a City of Brass put Phantom Nishoba and a Swamp in Garza's yard. He then cast Cabal Therapy quickly naming Tangle Wire… Shuhei backed him up and Magma Jetted him. He saw a fistful of guys, burn, and a Cursed Scroll. He fell to eleven from the Pup and Shuhei Wastelanded the City and played Lavamancer and Mogg Fanatic.

Jeff took another point from a fetch land and dropped to ten. He found an Island and Brainstormed into more blue cards. He Cabal Therapied a Magma Jet out of Shuhei's hand and hoped to find an answer next turn. His second Brainstorm just revealed yet more blue cards and none of the black ones he needed to bring back the Nish.

"That was a terrible hand," Garza chastised himself after the game.

Garza brought in three Smothers, Verdant Force, and taking out, among other things, his Duresses. Even though he was on the play this game and in a favorable match-up, Garza remained glum.
"I think this is supposed to be my only good match-up. I thought I wanted to play more of it but…"

He brightened considerably after Careful Studying a Nishoba and Akroma into his yard on his first turn. "That's what I'm talking about!" declared Garza as he Exhumed the Nishoba on turn two. Nakamura put out a Lavamancer and a Seal of Fire and promptly cracked the seal to make the Nish a 6/6. Garza had a Tutor and used it on his upkeep to find another Exhume for his Akroma.

There was only one thing that keep him from victory, and he watched anxiously as the Japanese player peeled for his third turn.

"No Bridge off the top?"

Garza was nervous about the prospect of red land destruction in the rubber game coupled with Wasteland and Rishadan Port. "I wish I had some basic lands to side in for this match-up."

Turn two Akroma awaited Shuhei as Garza played a Putrid Imp with Akroma and Exhume in hand. Shuhei Jetted the Imp and hoped/scryed for the best, but Garza discarded the Angel and Exhumed her right on schedule.

Garza drew a Vampiric Tutor and slow rolled it by scowling at the Ensnaring Bridge and bemoaning his face. He Tutored at the end of the turn for and even showed it off to his opponent. When the Japanese player did not scoop, Garza sensed something was up and looked at the life totals.

"Holy crap, you are at seven? I thought you were at six. I thought I just won."

Garza was at fourteen facing two Seals and two Lavamancers, and he had to find a way to do that last point of damage before sufficient burn floated to the top of Nakamura's deck. He drew a Vampiric Tutor but had dipped down to ten and Tutoring would put him within range of the burn on the table.

Jeff gave his deck careful consideration and counted down his options--Tutoring was not one of them. "I have a single out in my entire deck…let's see if I get it."

He cast the River EOT and peeled his card hoping for his lone out. He drew a City. Nakamura took him down to four, but was out of fodder for the Lavamancers, giving Jeff one more turn to find the silver bullet that could save this game.

If Jeff had drawn Sickening Dreams, he could have won, although if Nakamura had attacked with both his Lavamancers he would not have even had that small glimmer of hope.