to the finals of Pro Tour-Columbus 2005, site of an awesome new Extended format that featured eight different deck archetypes in the Top 8.

The eight that started Sunday were narrowed to two for the final. On one side of the table was a French salsa dance instructor named Pierre Canali. He fought through Geoffrey Siron's Blue-green Madness in the quarters and countryman Olivier Ruel's Goblin Red Army deck in the semis to put himself in the final of his first Pro Tour ever. 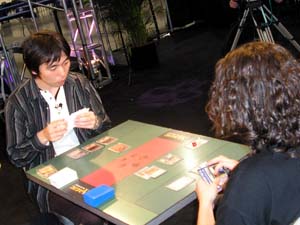 On the other side of the table is a considerably more experienced player in Shuuhei Nakamura, holder of five Top 8 Grand Prix appearances. However, he was never able to repeat that success on the Pro Tour until Columbus. His path to the finals was relatively simple, blowing through Gadiel Szleifer's Reanimator deck in the quarters and shutting out Nick West's Blue-white Control deck in the semifinals en route to this battle of Affinity vs. Red Deck Wins.

The deck matchup here was hard to pick, though Osyp Lebedowicz's prematch analysis suggested it leaned toward Red Deck due to the high volume of burn that doubles as creature destruction, and Nakamura's maindeck mana disruption in the form of Rishadan Port and Wasteland. On the other hand, Canali's deck is lightning fast, it plays fatter men, it's built to handle a lot of disruption, and Nakamura isn't packing the really potent Affinity hosers such as Meltdown or Pulverize in his sideboard. As we've all learned in the last year, Affinity is not only an incredibly fast and powerful deck, it is also resilient to most of the hate that gets thrown at it.

"Do you have any predictions?" I asked Canali before the match started. At first Pierre didn't want to tell me, but I finally wheedled his opinion out of him. "If he knows the matchup well, the matchup is very difficult for me. I tested against his deck a great deal, and it's not very easy. If I see my sideboard cards, I will have a chance, but if I do not, I think he might win."

Just before the match began, it was obvious that Canali was clearly overjoyed to be here. He said he cannot believe what has happened to him this weekend, but he's very excited to still be playing right now. 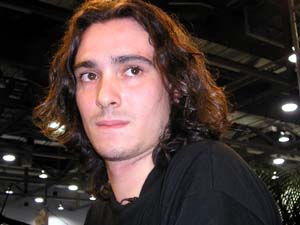 Canali won the toss and played a first-turn Aether Vial. Nakamura played a first-turn Jackal Pup, and the war of beatdown began. Canali exploded on turn two, playing a Seat of the Synod to go along with his Darksteel Citadel and then casting Arcbound Ravager and Frogmite, which Nakamura matched with a second Pup as each player began to deliver some beats. The next turn got better for Canali, when the Frenchman played a Somber Hoverguard, and considered playing the Arcbound Ravager in his hand before passing the turn. The Hoverguard was blasted from the sky by a Magma Jet at the end of turn.

When Nakamura attacked with his Pups, Canali Vialed the Ravager into play, blocking the Pups with a Nexus and the fresh Ravager. He sacrificed Aether Vial to the Ravager, making it a 2/2, stacked damage, and then sacrificed the dying Nexus to let the Ravager live. Nakamura Magma Jetted the Ravager during his second main phase, but Canali simply sacrificed it to his other Ravager, untapped, and smashed back with a Frogmite and a 5/5 Ravager, earning a concession.

Nakamura clearly disliked his first hand in Game 2, rifling through the cards a couple of times while shaking his head ruefully before shipping them back to his deck for a new six. Canali kept his hand of Thoughtcast, Nexus, Vial, Enforcer, 2 Cranial Plating, and a Frogmite. Nakamura played a turn-one Grim Lavamancer, while Canali again added a first-turn Aether Vial to his side of the board, something he has done all tournament as if it were his job. Nakamura sent a Magma Jet to Canali's dome and played a Wasteland for turn three, while Canali's deck was a bit stuck in the mud here, mustering only a second Plating. During Nakamura's upkeep, Canali Vialed a Meddling Mage into play, naming Blistering Firecat. Nakamura was nonplussed, casting Pillage on the Frenchman's Vial, and Wastelanding a Glimmervoid to leave the Affinity player with only a Blinkmoth Nexus for mana.

Canali's deck took it all in stride though, giving him a Seat of the Synod off the top, letting Canali play a Frogmite and then cast Thoughtcast. Canali was able to beat down a bit with a plated Meddling Mage, dropping the Red Deck player to nine before Nakamura played his trump card -- an Ensnaring Bridge that completely emptied his hand. Now it would be necessary for Canali to assemble his combo of Arcbound Ravager and Disciple of the Vault quickly before Nakamura got busy with his Lavamancers and served up an order of "Affinity player, extra crispy."

A fresh Meddling Mage locked out Nakamura's Firebolt flashback, while all the Red Deck player could do was summon forth a third Grim Lavamancer with only three cards in his graveyard. On the next turn, Nakamura served with the wizard, running it into a blocking Myr Enforcer simply to increase the number of cards in his graveyard. While all this was going on, Canali sat with two and then three Disciples of the Vault in hand, just waiting for his deck to deliver an Arcbound Ravager for him to play.

It finally did via a Thoughtcast, as Canali made what seemed like a very simple set of plays very complicated. On the turn before, Canali played a lone Disciple and let it get zapped by a Mogg Fanatic, which was strange enough. Now that he had the Ravager in hand and Aether Vials set on one and two, he first tapped his Vault of Whispers to actually cast a Disciple, and then activated the Vial set on two. Nakamura responded by targeting the second Disciple with burn, only to have Canali then activate the Vial set on one. Nakamura then targeted the Ravager with some burn before the Disciple entered play, but Canali sacrificed enough artifacts to save it. The Disciple Vial finally resolved, and Canali had just enough artifacts to kill Nakamura, putting the Red Deck in a deep hole.

Game 3 started with two Seal of Fire and a Cursed Scroll for Nakamura before Canali played a Chill. Nakamura took it in stride, paying three to get a Jackal Pup on the board, which Canali matched by playing an Arcbound Worker and another dreaded Aether Vial. The Worker was zorched by a third Seal, and the Pup beat down for two. Canali used his Vial to play another Worker and cast Thoughtcast, drawing a Ravager and a Myr Enforcer before the second Worker was burned away with another Seal. Nakamura added a second Pup to his beatdown plan, and it looked like we were finally going to have a good game in what was predicted to be a close matchup that probably favored the Red Deck. 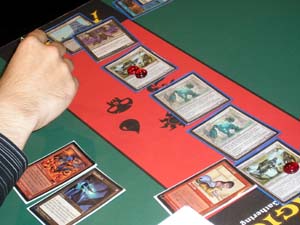 Then Canali had one of those Affinity turns . . . you know the kind. They go something like this: lay a Citadel, play a second Disciple via Vial, cast Arcbound Ravager, Vial in Ravager in response to your opponent zapping a Disciple with a Seal of Fire, sacrifice a Citadel to deal two damage, let the Seal resolve, cast two Myr Enforcers, beat with Disciple for one.

Okay, in this case it wasn't something like that, it was exactly like that. It's the kind of turn that says, "Hi, I'm Affinity, and I'm still completely insane in every format that doesn't have Null Rod. Now if you'll excuse me, I'm here to rape your horses and ride off on your women, and there's nothing you can do about it."

As a matter of fact, Nakamura did nothing except lay a land on his next turn before passing it to Canali, allowing him to bring his brick-to-the-face level of beatings to bear with two Ravagers, two Enforcers, a Blinkmoth Nexus, and a Disciple. Nakamura blocked two Ravagers with Jackal Pups (ow) and the Disciple with his Grim Lavamancer. Five sacrifices before damage later, Nakamura was extending his hand, and Pierre Canali, a French rookie appearing in his first Pro Tour, was the Pro Tour--Columbus 2005 champion.