some players such as Nicholas West and Pierre Canali strike gold their first time in the Pro Tour ring, its not always that easy. For some, things start much slower, with progressively better showings leading to long awaited success.

Shuhei Nakamura and Gadiel Szleifer are two such players, guys who have built a strong web of talent around them by showing the world repeatedly that they are more than capable of providing an intelligent approach to the game. Part of the new generation of Internet-bred pros, both of these guys have made their trips to the Pro Tour and done their homework. This weekend, it all started to pay off.

Szleifer, who came seventh at Pro TourSeattle, was at the top of the standings throughout the Swiss. Nakamura, who won Japan’s extremely prestigious end-of-year tournament in 2002, took the other route, going 7-0-1 on Day 2.

Nakamura Shuhei started Game 1 with the customary first-turn red creature, in this case, a Grim Lavamancer. Gadiel's Duress removed Pillage from Nakamura's hand, but he couldn't do anything about Rishadan Port locking down his mana on turn two. With just a Swamp to play with, Gadiel cast Cabal Therapy naming Akroma, Angel of Wrath in order to get the large lady into the graveyard. 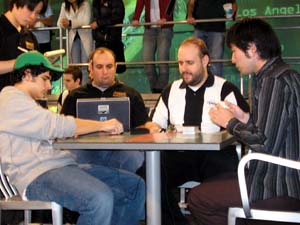 Nakamura chose to again use his Port, with Gadiel failing to play a third land for the Exhume in his hand, but Szleifer was finally allowed his mana, as Shuhei hit him hard with Blistering Firecat.

Akroma came into play with Gadiel at six life, but even a 6/6 flying, trampling, first striking, hasting, protection, double strike, flashback, buyback, cycling, kicker creature wasn't enough to outrace the Lavaman. Thanks to numerous sacrificed lands, Nakamura activated, untapped, activated again and finished off the kid with Seal of Fire

Game 2 started a little off balance, with Nakamura's seven cards trumping Szleifer's five. Throw in the fact that Gadiel's only mana source was a Mox, and that his first-turn Putrid Imp was promptly charred to a blackened crisp, and you have the unwinnable game. Gadiel conceded on turn three after drawing Rorix.

Gadiel once again mulliganed, but Nakamura did him one better, going to five to start the game, which was about as eventful as the previous one. Gadiel's first-turn Putrid Imp was matched by Jackal Pup, but the discarded and Exhumed Rorix wasn't matched by anything, as Shuhei sat on two land until Rorix sat on him.

Yet another no-land hand brought Gadiel's mulligan total to four for the match, and Nakamura exploded from the games, with turn-one Mogg Fanatic, turn-two Grim Lavamancer and Seal of Fire. He sacrificed the Fanatic to kill a Putrid Imp, but not before Gadiel could discard Akroma. Nakamura had the answer though, as Ensnaring Bridge entered play. 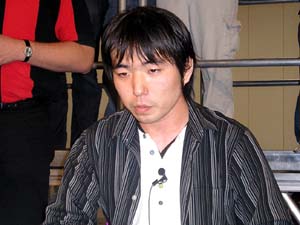 This was where Gadiel made his one questionable play of the match. Drawing Reanimate, Gadiel chose to cast the Exhume, bringing back Akroma as the Fanatic returned to Shuhei's table. He could have instead reanimated the Fanatic and killed the Lavamancer, but he instead went for the Exhume. The next turn though, Nakamura played two Cursed Scrolls, so it may not have mattered.

Nakamura's next draw was a second Bridge, but at end of turn, Gadiel cast Echoing Truth targeting Bridge, then Cabal Therapied them away. It was too little too late though, as the ensuing attack and sacrificing of all things red was just enough to reduce the American to zero, eliminating him -- and his country -- from Pro Tour-Columbus.

Nakamura advanced to the semifinals, where he'll face the winner of the Nicholas West.