was the first individual Pro Tour Top 8 for both players. England's Nicolas West was playing a unique blue-white Scepter Control deck of his own design. He has been testing and tweaking the deck for more than three months since he first qualified for this tournament at a local PTQ. He appears to have anticipated the field quite well and has seemed to have all the answers every time I watched him play. 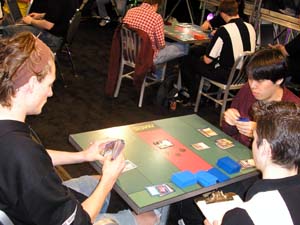 In the rounds leading up to Sunday's action, West had squared off with every member of the Top 8 except his potential semifinal opponent Shuhei Nakamura, who was playing Red Deck Wins. He lost to Geoffrey Siron, Masashi Oiso, and Pierre Canali in the Swiss and won the other three matches. He felt that he should have won the Siron match and he blamed the other two losses on his lack of preparation for those specific deck types leading to subtle play errors. It was very interesting that two of his three losses coming into Sunday were to decks that were not on his radar during his testing.

While this was Ryuichi Arita's first individual Top 8, it was not the first time he was playing under the bright spotlights of the Sunday stage. Arita made it to the first round of elimination at Pro Tour-Seattle as a member of S.A.I., along with his current deck's designer Masami Ibamoto. His Columbus deck is the Junk Loopatron combo deck that revolves around gaining infinite life through sacrificing an arbitrarily large cleric or Task Force to a Starlit Sanctum, Worthy Cause, or Animal Boneyard.

Both players considered this to be a tough match to predict a winner for with both of them putting it at 50/50. If Arita can come out of the gate with a Nomads En-Kor and Daru Spiritualist on the first two turns under West's counter magic, then there was little West could do to stop him -- especially if a Starlit Sanctum was in play. On the other hand, if at any point West manages to imprint on a Scepter before all of the Japanese player's pieces are on the table, there is almost nothing Arita will be able to do.

West led off with Flooded Strand and Arita came back with Nomads En-Kor -- half the combo was on the board. West cracked his fetch land at the end of the turn and found an Island to Brainstorm. He had another Strand and passed the turn. Arita beat down for one and offered up a Daru Spiritualist to the control player only to have it Force Spiked. 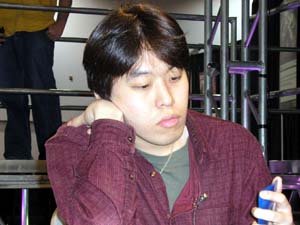 West sat back on three lands and took his beatings from the En-Kor. Arita was stalled on two lands and passed the turn. West announced "Task Force" as his Meddling Mage hit play. The Japanese player ed for another Spiritualist at the end of the turn, but when he attempted to play it, West had the Counterspell ready.

West untapped and played his deck's namesake, the Isochron Scepter imprinting Mana Leak. He used the stick when Arita attempted a Shaman En-Kor. West beat down for two with Meddling Mage and used the stick on Arita's next turn when the Japanese player attempted another Shaman. Arita did finally find his third land though as the players traded beats with their meager critters.

Arita's fourth land was a Starlit Sanctum, meaning West could not allow a Daru Spiritualist to resolve or it would mean the game but Arita just passed. He scooped when West played his second Scepter -- this time imprinting the key card in this matchup -- .

Arita seemed unhappy with his opening hand but after a sibilant intake of breath through his clenched teeth he decided to run with his hand. West was looking at a one-lander but had Brainstorm and a tank full of gas if he could find the land to set it off. On the basis of Brainstorm -- the card Gary Wise called "the most powerful card in Extended" -- he decided to keep. Arita made the game's first play, a turn-two Shaman En-Kor. West cracked his Flooded Strand to dig three cards deeper and find out if his gambit was successful. He found his lands but shook his head seeming to regret how he put the cards back down on top of his deck.

Arita searched up a Daru Spiritualist with his and Enlightened Tutored for Seal of Cleansing. He played the Seal and West had to Mana Leak it, which gave Arita a window to play his Cleric and he took it. He was tapped out and could not "go off" this turn if he had a Worthy Cause and there was not Starlit Sanctum to be seen. West calmly played a fourth land and Wrathed away the Japanese player's deadly creature tandem. Arita already had his guys in the bin before West even finished tapping his mana.

Arita loaded up for a second round with another Call for Spiritualist and Living Wish for Starlit Sanctum but West pointed a second Scepter at the Japanese player and loaded it with . Arita slumped against the back of his chair and tried to steel himself for the long climb back from an 0-2 hole.

West was upset with his first play of the game. "I played incorrectly," he explained. "I put the cards back in the wrong order from the Brainstorm. I put the Wrath on top of the Accumulated Knowledge but no matter."

Apparently Arita did not feel he had dug himself a deep enough hole so he decided to start Game 3 with only six cards -- although he liked those six much better than his first seven. He led off with Nomads En-Kor but had no turn-two play. Arita cast Living Wish on the third turn for a Spiritualist -- he had Worthy Cause in hand. West was displaying the irksome calm of all control players and playing draw-go. He patiently took his Nomad beats while he developed his mana and accumulated cards in hand to fight through the infinite life combo that Arita was attempting to build on his side of the table.

Arita like he might be able to fight through West's permission with an of his own waiting to lead off a critical turn. West attempted to blockade Arita's routes to victory with a Meddling Mage. 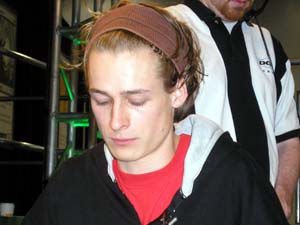 "I shall name…" He just wasn't sure which route concerned him more. "Eenie-meenie…at this stage I am going to name 'Task Force'."

The Japanese player "duressed" a counter with an Academy Rector. The match was briefly interrupted by a round of applause for Shuhei Nakamura who took down Gadiel Szleifer in a four game battle.

Arita decided to go for it on his next turn and cast . West considered his plays and responded with two Accumulated Knowledges. He had only one white left open and used it to cast his own in response.

Arita settled back into his chair and could do nothing else that turn. West put out another Mage naming Spiritualist and Arita was stymied. West d Arita's City of Brass to draw another card and untapped to administer the Chris Pikula beatdown with his two Mages.

Arita Called for a Shaman En-Kor and played it. West read the card and gave it permission to resolve. He quickly smacked himself in the forehead. He attacked both his Mages into the En-Kors and when Arita blocked he took down the Nomad. West saved his own Mage with Boomerang and replayed it naming the same card.

Arita had no play and fell to one on the next turn from the Mage beatings. West played a third Mage and named Academy Rector. Arita could only play a new Nomad and pass the turn. West cast Accumulated Knowledge for three cards. Arita would eventually succumb to the barrage of Pikulas but just to be safe West showed him a Scepter with an to go with it.

This event marked the first time playing on the Pro Tour for West and when he made Top 8, he was looking forward to a good night's sleep. Since he was new to this level of play he was not aware that everyone in the Top 8 was being provided with all the Sunday deck lists and that he would have the choice between sleeping or preparation.

West is the poster child for tournament preparation and decided to get a little less sleep than he originally planned and work on this matchup. One of the things he learned was that he did not need to worry about having two Counterspells if Arita attempted to him to try and get his combo pieces in play. Instead, West discovered he could in response to the Japanese player's Chant.

He credited Texan Billy Moreno with helping him to understand that aspect of the matchup. Moreno is one of a group of a half-dozen players West has met this weekend who West and formed friendships with. After his stunning debut this weekend he will have the opportunity to meet and make plenty of friends all over the world.