Siron and his Blue-green Madness deck had won this matchup earlier in the tournament. In round 15 he defeated Pierre Canali's Affinity in Game 3 by top-decking a Wonder and an Oxidize two turns in a row. The win moved Siron to 36 points, where even a last-round loss to Ryuichi Arita didn't remove him from the Top 8. 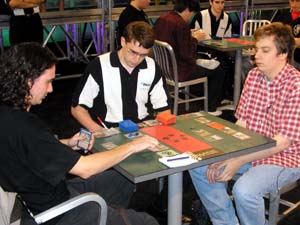 Pierre Canali was the only undefeated player at the end of Day 1. Gadiel Szleifer ended the Frenchman's streak when he reanimated a turn-one Rorix Bladewing to defeat Canali in round 9. That loss was one of three Canali had the entire weekend. His 13-3 record left him in first place after the Swiss rounds were complete.

Canali was on the play but had to wait as Siron started with a mulligan. The pair was the last quarterfinal match to begin because of their extensive shuffling. Perhaps they wanted to make sure that the camera had time to come over to their match.

Siron stared at his second hand and didn't appear to be pleased but kept in any case. Canali began the game with an Aether Vial while Siron played a Chrome Mox and a Careful Study. The study was strong as he madnessed a Basking Rootwalla into play and placed a Roar of the Wurm in his graveyard.

Canali played out an Arcbound Ravager and left the Aether Vial up as a threat to be used on Siron's turn. Siron attacked with his Basking Rootwalla so Canali put an Arcbound Worker into play and blocked.

After damage on the stack Canali made his Ravager a 3/3 while Siron let his Rootwalla die. Siron cast an Aquamoeba.

Aquamoeba came across and flipped, bringing Arrogant Wurm into play. Frogmite came into play for Canali. He sent his Ravager in again.

Siron counterattacked with Arrogant Wurm and flashbacked his Roar of the Wurm. Canali began to think about the possible attacks. With Siron on 9 life, Canali attacked with all his creatures -- Meddling Mage, Frogmite and Arcbound Ravager came into the red zone. Siron was forced to block the artifact creatures because they were lethal if left unblocked. Aquamoeba blocked Arcbound Ravager while Roar of the Wurm blocked Frogmite. Canali sacrificed a land to grow his Arcbound Ravager and then sacrificed his Ravager to allow an immense 8/8 Frogmite to kill the Roar.

Siron had one card left in hand when he played Wild Mongrel. Then he went on the offensive sending in both Arrogant Wurm and Aquamoeba. Siron discarded his last card in hand, an Island, to flip Aquamoeba and leave Canali at six life.

Canali played an Aether Vial and a Frogmite before attacking with his 8/8 Frogmite and Meddling Mage. Wild Mongrel stepped in the way of the fat Frogmite. Arrogant Wurm attacked again for Siron putting Canali on two life.

Siron had just Aquamoeba back to block and it did, another victim of fatty Frogmite. Before it died, though, it put an Arrogant Wurm into play. Canali didn't have enough blockers to stop the two trampling Arrogant Wurms and Siron took the first game in a surprising comeback.

Canali's opening hand Game 2 had two Meddling Mages, a Thoughtcast, a Somber Hoverguard but only colorless land for mana. Not wanting to lose without having played a spell, he wisely sent those back for six new cards. 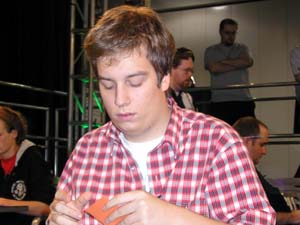 While two of the other matches had already finished by this point, Canali and Siron seemed more interested in shuffling Magic cards than playing them. Every shuffle was a drawn-out process.

Canali kept his six-card hand and led the game off with a Disciple of the Vault. Siron just played an Island. Canali's second turn saw him attacking with the Disciple and playing Cranial Plating.

Siron thought about his options on turn two and played a second Island and an Aquamoeba. The Moeba held off the Disciple but Canali used the turn to play a Somber Hoverguard.

Siron found green mana on turn three and played a Wild Mongrel. The Somber Hoverguard would be a threat with Cranial Plating. Canali resolved a Thoughtcast and then played an Arcbound Worker, a second Disciple, and a .

During his upkeep, Siron shot a Disciple of the Vault, Canali began sacrificing his artifacts dealing 2 damage a sacrifice to Siron. Canali sacrificed four artifacts leaving Siron on six life. Had Canali had out just one more artifact he would have won the game right there but now he would be forced to find a way past the Masticore.

Siron played out a Waterfront Bouncer and passed the turn. He didn't have any mana up to regenerate the Masticore so Canali attacked with all of his creatures. Waterfront Bouncer chump-blocked the Ravager and Masticore killed the Arcbound Worker.
During his upkeep Siron shot the Disciple and was trying to figure out what to pitch to the Masticore. In the end he decided to throw Circular Logic.

Arcbound Ravager and Masticore were locked in a standoff. Siron had to pitch a card a turn but Canali wasn't able to muster any offense to get passed the shots of Masticore.

Slowly Canali started to build up permanents. Over the course of a few turns he rebuilt his mana base. He also played out an Aether Vial and a .

The next turn Canali played a Frogmite and then a Thoughtcast. After the Thoughtcast he brought down another Frogmite. Masticore had eaten away too much of Siron's resources so Canali was able to deal the final 4 damage.

All the other matches had finished, so the cameras turned on the two Europeans as they battled their way forward. Siron started Game 3 with a first-turn Basking Rootwalla. Canali had Aether Vial. Siron sent in the Rootwalla for one and played Wild Mongrel. A , an Arcbound Worker, two Frogmites and a Somber Hoverguard all come out for Canali on his second turn.

Siron kept his creatures back and killed the Aether Vial with an Oxidize. Aether Vial had already done its damage though. Canali sacrificed the and played an Arcbound Ravager. Siron didn't want to see that Ravager enter play, however, and pitched both a Thought Courier and a Circular Logic to prevent the Ravager from coming out. Somber Hoverguard went in for three.

Siron played out a Merfolk Looter on his turn. Canali tried to make another Arcbound Ravager but just like his brother Circular Logic also met this one. Somber Hoverguard hit again.

Siron had an active Merfolk Looter now and began digging into his library. He had successfully neutralized the Frenchman's quick start but now was being hit by Somber Hoverguard.

After casting a second Hoverguard, Canali sent in both a Somber Hoverguard and Blinkmoth Nexus, taking Siron to 9.

The Looter tried again to find Siron some business but once again he discarded an Island and passed the turn. Canali sent in just his air force and Siron surprised him with a Wonder. The Mongrel was pumped twice to kill a Hoverguard while the Basking Rootwalla took down the Blinkmoth Nexus.

Canali played out Cranial Plating on his next turn after Siron had done nothing. Somber Hoverguard came across and Siron traded his Basking Rootwalla with it. Siron once again played nothing.

Canali sent in both Frogmites and an Arcbound Worker. The unblocked Frogmite received Cranial Plating and that was enough to finish Siron.

Siron had barely looked at his opening hand before deciding to send it back. He started the game with a Chrome Mox, a Forest and an Aquamoeba, leaving only two cards left in his hand. Canali played an Aether Vial once again. 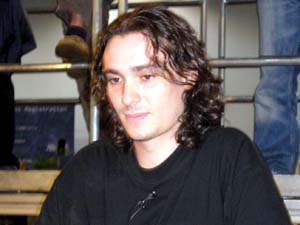 Siron flipped Aquamoeba during the attack and put a Wonder into the graveyard. He didn't have any Islands yet so Wonder didn't even grant flying.

Canali played a second Vial, a Frogmite and a Somber Hoverguard. Siron simply laid down another Forest and passed the turn. During the end step, Canali used the Vial to bring out an Arcbound Worker.

Canali attacked with all three of his creatures. Siron had the Aquamoeba block the Arcbound Worker. Canali brought out a Disciple of the Vault during the attack step. Siron fell to 14 from the attack while the Frogmite grew to 3/3. During Canali's end step Siron used Intuition to go retrieve a Chrome Mox, a Deep Analysis and a Roar of the Wurm. Canali chose to give Siron the Roar of the Wurm.

Siron paid 3 life to cast the Deep Analysis from his graveyard. Siron didn't play a land after the Deep Analysis. His hand size had grown from two cards on the first turn to six during the mid-game.

Canali attacked with everyone; the 3/3 Frogmite, the Somber Hoverguard, and his Disciple of the Vault. Aquamoeba blocked Frogmite and flipped. Canali enjoyed using his Aether Vial to place down Arcbound Ravager showboating for the camera as he did so. The Ravager ate all of Canali's permanents to finish of Siron.

With the victory, Canali moved on to the semifinals to face Olivier Ruel's Goblins.