Oiso comprises a big part of one of the stories of this Pro Tour. Lead by their young superstar, the Japanese dominated the top of the standings this weekend, placing three players in the Top 8 and a fourth in ninth place. Oiso has now made four final Sundays in his relatively brief career, including back-to-back Top 8s in Extended Pro Tours. 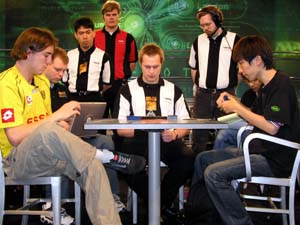 Sitting across from Masashi is Olivier Ruel, another stellar Magician who is appearing in his third Pro Tour Sunday to go along with his nine Grand Prix Top 8s.

Looking at the matchup ahead of time, most experts were undecided as top which player would actually win this matchup. Desire is very fast when undisrupted, but Ruel's sideboard contains a lot of discard spells to go along with his Cabal Therapies in the maindeck, meaning the Goblin deck would have a chance to lay a couple of beaters and then tear apart Oiso's hand after Game 1.

"I did not test this at all last night," admitted Olivier, "so I am now learning his sideboard by heart in the thirty seconds before the match starts."

"Masashi... nice shirt," said Ruel, pointing to Oiso's Pro Tour-Columbus shirt that was passed out to all the competitors when they registered this weekend. "I so did not expect to do well in this tournament. We changed decks a couple of days before we came here. I tested everything except for Goblins and I didn't like anything. I talked to a friend and asked if Goblins were good. He said yes, so I decided to play it. Now I am here."

Ruel drew a hand of all red cards for his opener and was forced to toss it back, as Oiso kept his. A second hand of three lands, Skirk Prospector, Goblin Piledriver, and Siege-Gang Commander was deemed adequate, and they were off. Brainstorm, a turn-two Chrome Mox, and Sapphire Medallion were the first three turns for Oiso, as Ruel built a somewhat slow Goblin army with Skirk Prospector, Goblin Piledriver, and Goblin Matron, searching out Goblin Warchief. Oiso seemed disappointed when his only play on turn four was to cast an imprinted Chrome Mox and pass the turn. Ruel gave a little fist pump when he drew his next card, plucking Cabal Therapy off the top. 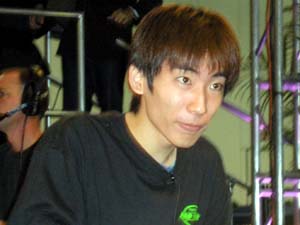 He whiffed on the discard spell by naming Intuition, as Oiso revealed Cunning Wish and Snap. Ruel attacked, and with the Piledriver trigger on the stack, Oiso Snapped a Skirk Prospector. Olivier sacrificed the Prospector in response, making certain Oiso wouldn't get to untap any lands from the spell. After combat, Ruel ripped the remaining card from Oiso's hand, which ended up being an Intuition after Oiso cast the Cunning Wish to fetch it.

Ruel cast a Meltdown for zero, clearing both of Oiso's Moxes from the board, and leaving him with a measly two Islands and no hand. Masashi drew his next card and then scooped up his board, conceding there was nothing he could do to prevent his death on the next turn.

Ruel brought in three Duress, three Cranial Extraction, and Meltdown from his sideboard, getting rid of some of his slower goblins.

"I'm lucky, otherwise I wouldn't be here," said Ruel, as he chose to keep a one-land hand with a Bloodstained Mire, Duress, Prospector, Cranial Extraction, , and Goblin Piledriver. The hand was obviously gassy, but Olivier would need to draw at least one, and probably two or three more land in order to have a chance to impede Oiso's combo.

Of course, Ruel turned out to be right, as he topdecked a Sulfurous Springs exactly when he needed it, and cast the Piledriver, which Oiso Condescended for one.

"He has one sideboard..." Ruel said to me, "one Condescend, one Mana Leak."

Ruel mised another Springs directly off the top of his deck, referring to himself as "nice player." The third land let him cast and resolve Goblin Warchief, as Oiso didn't have his second sideboarded counterspell in hand. Duress from Ruel stole an Intuitioned Accumulated Knowledge from Oiso, revealing Turnabout, a land, and scape Familiar, exposing his hand as very weak. from Ruel gave him another Piledriver and a Matron in his hand, and Oiso was again overrun by little red beaters, in spite of a Turnabout that delayed his death for a turn.

"I didn't play very well this weekend, I keep hands I should not keep, and yet I am up 2-0 against the best player in the Top 8," Ruel sighed. "Magic... It is so important to win your first match in a Top 8. You get almost twice as much money, more Pro Tour points, and plus, even though it's not supposed to matter, if you win, you get a trophy. I don't want to go home after a PT top 8 without a trophy."

Ruel decided to keep his hand after his first four cards revealed two lands, Duress, and Cranial Extraction. The rest of his hand was Chrome Mox, a third land, and Goblin Piledriver, giving him little real gas, but the possibility to wreck Oiso with excellent discard.

An early Duress sent Accumulated Knowledge to the bin. Another Duress off the top got rid of Mind's Desire, forcing a stern frown from Oiso, as he revealed only two more lands in hand, marking him as clearly manaflooded - a situation that was not helped by Ruel's hand destruction. Ruel cast Chrome Mox imprinting his Extraction, and then cast a Ringleader, getting two more Ringleaders and a Goblin Warchief for his troubles. 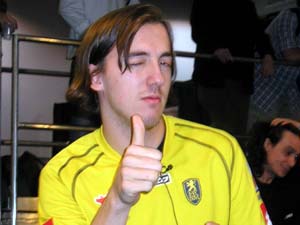 Oiso had clearly bounced back though, as he played back-to-back Accumulated Knowledges after casting a Deep Analysis the turn before, restocking his hand with an extra nine cards. He didn't go off though, instead passing the turn after playing a Sapphire Medallion to match his scape Familiar. How many more cards would he need to draw before he could win a game in this match?

Therapy from Ruel naming Cunning Wish landed, revealing another three lands, Mana Leak, and Cloud of Faeries. Ruel then cast (Oiso Leaked it), attacked with his team, and then sacrificed his Ringleader to flash the Therapy back, getting rid of the Faeries.

Oiso cast the first Mind's Desire of the match for four, but fizzled, as Ruel flipped over Sapphire Medallion, Chrome Mox, a land, and Brainstorm for the Japanese player. Ruel imprinted a Chrome Mox, cast Goblin Warchief, and another Ringleader, seeing the Warchief Snapped back to his hand as he dropped Oiso to four life.

Oiso cast Cunning Wish for Stroke of Genius, and then Stroked for four, leaving him with three untapped Islands. He then used one of those Islands to cast Brainstorm, and a second to cast Intuition, getting two Cloud of Faeries and Turnabout. Oiso cast the Cloud Ruel gave him, Snapped them back to his hand, cast them again, and then cast another Intuition, this time getting two Merchant Scroll and a Mind's Desire. Ruel gave Oiso a Scroll, and Oiso passed the turn with a grimace, as his deck crapped out on him.

"He conceded to me to get me into the Top 8 yesterday," remarked Ruel, "so it feels a little bad to beat him. I wanted to play him because he is a great player -- the best player in this Top 8 -- but on the other hand it is sad to knock him out of this tournament. He deserved to advance much more than I did."