Aten, fresh off his Grand Prix–Chicago win with :B, squared off in round 1 vs. Quentin Martin, perhaps best known for advocating and popularizing the Dampen Thought deck archetype. Tim drafted a black/white deck full of flashy legends (Seizan, Perverter of Truth, Nagao, Bound by Honor, Tatsumasa Dragon's Fang, Sensei Golden Tail) and other assorted gas (Hideous Laughter, Kabuto Moth, Double Rend, Honden of Cleansing Fire, Swallowing Plague) -- more than a match for almost any other deck at his table; well, at least six of them.

While Martin claimed that he was not trying to draft his trademark Dampen Thought deck -- when he saw Sift Through Sands and Dampen Thought staring at him from the wheel, he couldn't resist what seemed to be a karmic pull. Despite having only two thirds of the draft to fill the deck's unusual card requirements, Quentin pulled together a very tight deck, with eight card drawing spells to find the Dampen, and double River Kaijin, Teller of Tales and double Ethereal Haze to slow the game down enough to bring the combo online. Another powerful card in Quentin's Deck is Long Forgotten Gohei, which really turbo charges the Dampen engine, should it hit play.

This match seemed like it would come down to whether Aten could bring enough fast pressure before Quentin could find all the pieces to his puzzle. While powerful, Aten's main deck is a bit slow, and has a number of essentially dead cards against Quentin (Rend Flesh, Honden , Hideous Laughter), giving Aten a good chance of running into a virtual Mulligan before sideboarding.

While shuffling up, Martin asked Aten what he thought of the pod.

"I could have gotten a better matchup. I can't believe you actually drafted Dampen starting that late," Aten said. 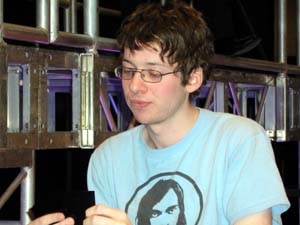 Quentin replied, "I can't help it. I love it." Old habits die hard.

Aten's opener was a pretty good one, featuring a Kami of Ancient Law and Ashen Skin Zubera, three lands covering both colors and a couple higher end animals, but no totally dead cards. Martin's hand was also a hot one though, with a couple of bounce spells, three lands and two card drawers. Over the first few turns, Aten cast Kami of Ancient Law -- a decent beatdown guy against Dampen -- but unfortunately for Aten, he had to cast it several times, as Martin used a Consuming Vortex to buy himself enough time to cast a turn-three River Kaijin and a turn-four Counsel of the Soritami, searching for the Dampen Thought. Aten Befouled the blocker instead of playing Seizan, in hopes of keeping the pressure on Martin instead of giving him Seizan's two cards, but Martin Sifted Through Sands and saved his Kaijin with a vortex.

Quentin dug and dug, finding the Dampen Thought. Aten said "Well, clearly not winning this one, so...." bringing Seizan into play instead of playing a couple of two drops. Martin seemed much happier about Seizan than Aten did, and rightfully so, as Aten was shuffling up for game 2 not soon after.

Aten asked the judge if he could sideboard away from the table, clearly wanting to make Martin guess if he was going to board in 50 or so cards to fight the Dampen engine, or if he would keep the deck basically the same. That way, Martin would have to also guess whether to bring his creatures in from the board or not. The judge allowed it, but Martin appealed:

"You can't leave the table to sideboard, I checked with the head judge before the round," he said.

"Yeah. You would have," replied Aten.

The head judge agreed with Martin, and Aten dejectedly began sideboarding. "I can't imagine a worse round 1 for me. A jolly good rogering I'm getting here."

Aten seemed to have a slow draw Game 2, except for a turn-four Nagao. Martin again bought himself time to dig through a combination of Consuming Vortexes and Psychic Puppetry. Aten's draw rolled out perfectly though, hitting every land drop and pushing man after man into the red zone. When Martin would bounce one man, Aten played two more. Having depleted the bulk of Martin's resources with his relentless attacks, Aten brought the game home with a Waking Nightmare, ripping the last two cards from Martin's Grip -- a Vortex and Ethereal Haze that should have bought him at least two to three more turns -- and the players quickly move to Game 3.

"Game 3, this bad boy is coming out," Aten said, flopping a card face down on the table.

"Let's see it," said Martin "I'll bet it's something really embarrassing, isn't it?"

"I have a beatdown sideboard you know -- I might just bring it in Tim," said Martin, flipping over two Soratami Seers.

Martin wisely left the "threatening" Seers in the board, but things fell apart for Martin quickly in game 3 just the same. Martin missed his turn-four land drop, and had only one island among them, stranding multiple Sifts in his hand. Tim dropped turn two and tree animals, and Rend Spirited Martin's fourth-turn River Kaijin.

A fifth-turn Befoul on Martin's lone island and it was basically all over but the crying. Martin kept his chin up the whole time, though.

"Don't you know? I am the future of American magic, jut ask these guys," Aten said, pointing to the coverage staff.

"I am definitely winning this one then," quipped Martin, who moved his second River Kaijin into the red zone (taking Tim to a precarious 19) before scooping and extending the handshake and congratulations to Aten.