Nuijten, at a mere 15 years of age, is the reigning World Champion of Magic. He attended Worlds in San Francisco as a member of the Dutch national team and ended up winning the whole thing -- quite an accomplishment for his first Pro Tour. Kenichi Fujita, on the other hand, is a grizzled veteran who won the first Grand Prix held in Japan, then followed it up with another win in Taipei. He also finished 14th in Amsterdam, the most recent Rochester event. This match is a classic example of youth versus experience. Both players were 0-1 and looking to salvage a respectable record from the draft. 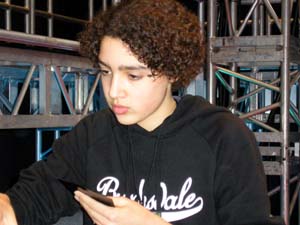 As the competitors gathered in the Feature Match area, Paul Reitzl asked, "Julien, didn't you lose last round?", referring to the fact that usually it would be the 1-0 players getting feature matches this round.

"Must be your face," Paul speculated, grinning.

Luck was exchanged and the players began. Kenichi, who had a hometown crowd cheering him on from the stands, started with Orochi Sustainer and attempted to take down Julien's Kami of Ancient Law with the aid of Kodama's Might. He was hoping to be able to play out a Honden of Infinite Rage but needed to get rid of the pesky 2/2 first. Unfortunately Julien just nodded and played out another one.

Kenichi frowned when he saw that his next draw was Glacial Ray, as he realized how good it would have been had he saved his other Splice spell. He pondered taking down the Kami of Ancient Law but instead opted to wait on the Ray and play out the Honden instead. Julien added a Ghostly Prison but seemed to have a creature-light draw.

The players traded blows until Kenichi was forced to use his Glacial Ray plus a point from the Honden to deal with a fresh Teller of Tales. He was clearly unhappy that he hadn't yet drawn another Arcane spell. Both players were playing quickly, and conversation was limited to the usual lingo: "Go", "Take", "Cards?", "To You" and the like.

Kabuto Moth from Julien threatened to break the game open, especially when it was enhanced with Indomitable Will after blocking Kenichi's Burr Grafter, though Julien did fall to 7 on the attack. Julien then summoned Soratami Cloudskater and looted twice, discarding lands. He cracked back for 4 and Kenichi fell to 6. The race was on.

Kenichi targeted Cloudskater with his Honden, but Julien had the second Indomitable Will to save his flier. With nine lands on the table and few cards in his hand, he couldn't do much and had to pass the turn back. Julien sent for four, leaving the Moth back, then added Hundred-Talon Kami. Kenichi drew, hoping to find something to pair with a new Glacial Ray in his hand, but it was creature and he was forced to scoop.

Kenichi went to his sideboard with the following modifications:

Taking out the enchantments made sense given the three Kami of Ancient Law in his opponent's deck, as did bringing in the Ben-Ben, Akki Hermit against Julien's Blue-White deck. The other changes, though, seemed a little random.

Julien led off Game 2 with the strong start of Kami of Ancient Law and Kitsune Blademaster. Kenichi, with four mountains, could only muster Ember-Fist Zubera and Kami of Fire's Roar. Both White creatures rumbled into the red zone and Kenichi didn't block, fearing the inevitable Indomitable Will. He drew Glacial Ray and lapsed into thought.

His options were to immediately kill the Blademaster, using his Spiritcraft trigger to render a Callous Deceiver unable to block, getting three damage through, or to hold the Ray and hope that he could trick Julien into trying to use Indomitable Will and then kill a creature in response. He eventually went with the first option, perhaps fearing the possibility of a second Will, which would completely wreck him if he tried the second plan.

As Kenichi was picking up his cards, he accidentally showed Julien the Sideswipe he had boarded in. Julien was quick to comment: "You had Sideswipe? There was no card for you to Sideswipe. I don't even have any Arcane cards in my deck."

The younger player definitely had a clear desire to win, even going so far as to note down every card his opponent played, in case the information would help in later games. The veteran, on the other hand, didn't seem to be as determined, and fell to 0-2 while the youngster advanced to an even 1-1.