storyline for this match pits the reigning Player of the Year against the Japanese Grand Prix master. The exploits of Gabriel Nassif, sporting his festive yellow hat, are well-known in the Magic world. He's considered perhaps the best Constructed deckbuilder in the world, but he also takes a lot of pride in his Limited game and feels that perhaps he doesn't get enough respect for that area of his game. 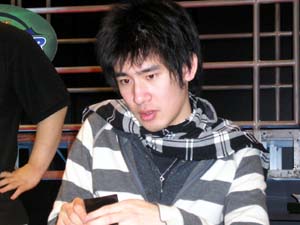 Masahiko Morita has 13 GP Top 8s to his name.

Masahiko Morita has an incredible 13 Grand Prix Top 8 appearances, but he rarely makes it out of Japan, so the rest of the Magic world probably isn't as aware of his achievements and the quality of his play as they should be.

Game 1 kicked off with Nassif using Eye of Nowhere on one of Morita's lands to gain some tempo and then casting Kami of Twisted Reflection, Soratami Mirror-Mage, and Soratami Savant to Morita's Kabuto Moth, Kami of Old Stone, and Hundred-Talon Kami. Morita went on the beatdown, bashing with his big-bootied men before adding a Samurai of the Pale Curtain to their number while Nassif drew cards with Counsel of the Soratami and looked for a way to staunch the bleeding. Teller of Tales looked like a possible answer, but Nassif kept shaking his head as he cast the spirit indicating he wasn't particularly happy with the current game state.

Morita's attack dropped Nassif to six, but the Frenchman bashed back on his turn with the whole team, dropping Morita to nine and leaving the Teller and two Kami of Twisted Reflection on defense. Reciprocate took out the Teller and Mystic Restraints tapped down a Kami before combat, forcing Nassif to block the Samurai or die and go to two in the process, making any unblocked attacker lethal next turn with help from Morita's Moth.

Nassif attacked with the Savant and Mirror-Mage, and then returned the Moth to Morita's hand before casting another Kami of Twisted Reflection and Soratami Cloudskater. Morita then sent only the Hundred-Talon on the attack, dropping a Cloudskater out of the sky before casting River Kaijin and the Moth again. Nassif cast another Teller of Tales to give him enough blockers to live out the turn, but Morita drew a trump in Cage of Hands and it was on to Game 2.

Game 2 became a battle between Teller of Tales for Nassif and Sensei Golden-Tail plus Soratami Savant for Morita. Nassif's first Teller met a Reciprocate and his second fell into a Cage, but that didn't stop him from using the tap ability to push through some solid damage.

Morita stabilized the board at nine with a host of undersized men while Nassif was stuck drawing too many land to generate additional pressure. Kami of Twisted Reflection took one for the team in order to free Nassif's Teller from bondage and Soratami Cloudskater helped him draw into Meloku against Morita's teeming hordes, but he had to wait a turn to cast the mirror master, giving Morita a chance to continue solidifying his board with Golden-Tail's ability and Hankyu.

The game stalled heavily while both players looked for some sort of advantage, either from the top of their decks or from a mistake by the other player. Though the play on the board was considerably more complicated, the fact of that matter is that Hankyu dominated Nassif's small army of fliers, and the problem was only compounded by a continuing glut of land for Nassif.

That fate earned Nassif his second loss of the day in spite of having Meloku in play for numerous turns. The loss dropped the reigning player of the year to 1-2, meaning he will have to win out in order to make Day 2.