the second Rochester draft of the day began for Osyp Lebedowicz at Table 1, things were looking good. Starting with the very first pack, Osyp was able to establish himself as the red player, and it quickly looked like he would have two chairs in either direction between him and any other players drafting the red cards. Given Osyp's opinion that red is likely the strongest color in the format, it's an enviable position in which to find oneself. 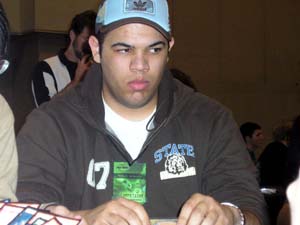 Not the face of a happy drafter.

And yet, half a draft later, frustrated by repeated hate-drafting from the players on both sides of him, Osyp found himself hate-drafting a Cage of Hands to draw a line in the sand -- ripping the card in half and leaving the pieces on the table in front of him.

In a game of inches like Magic, the most critical time to prove oneself often comes when everything is going wrong. When things are at their worst, there's certainly no shame in losing. But for the great players, sometimes you have to find a way to win no matter what's going wrong. At this point in the draft, things were looking very bad for Osyp. Despite having positioned himself well color-wise, the packs weren't cooperating and neither were his neighbors.

For most players, it would probably have been enough to sink them completely. But Osyp isn't most players, and it showed as he looked for every way possible to get back into this draft, one pick at a time. Once he'd declared his feelings about the draft in such a dramatic fashion by ripping up a card, it seemed that both his neighbors backed down, focusing their picks instead on their own decks.

As the remaining packs were opened, several questionable-seeming picks at various chairs sent good cards Osyp's way. In the later stages of the draft, the packs at last cooperated by providing enough good cards in his colors to go around, rewarding him at last for setting up his colors so well relative to those drafting around him.

When I sat down with him after the draft, it was clear he was still frustrated by the difficulties he'd had, but it was just as clear that he felt he'd pulled together a pretty good deck, all things considered. His red-green beatdown special sported a solid curve with some very reasonable creatures, good quality combat tricks, plus an excellent finisher in Soulblast that had gone nearly all the way around the table before he was able to scoop it up -- in part because the potentially devastating spell just didn't fit in the decks of his opponents.

When asked him how he liked his chances in the coming rounds, he answered by pointing out how the draft had gone. He felt that several players at the table had made poor card choices, and though this had sometimes hurt him it was his hope that this meant he was more likely to be able to outplay his competition when it came time to put the decks to the test. When I asked him for a prediction, he smiled and said, "I hope I can get it to go 2-1, but who knows?"

After the pairings were announced, it was Bernardo Da Costa Cabral on the other side of the table. The players chatted pleasantly as they shuffled up their decks, reminiscing on the near-miss at the beginning of their draft when another player had come very close to missing the draft altogether, arriving at his chair at exactly the very last moment possible. Had he arrived any later (as happened to Alex Shvartsman) the player would have been forced to sit the draft out, ending any hope of making Day 2. Unprompted, Bernardo also commiserated with Osyp's difficulties with his neighbors, in a format where neighbors that cooperate often have a significant advantage. 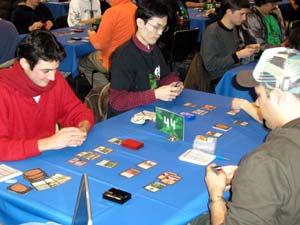 A scarved Bernardo vs. a hatted Osyp.

And then it was time to play. Both players had nice aggressive starts. Bernardo was on the play and used a turn two Sakura-Tribe Elder to accelerate into an early Feral Deceiver, while Osyp had turn two Hearth Kami followed by Ronin Houndmaster and a quick swing for four damage. Bernardo's fourth turn brought a massive 5/4 Gutwrencher Oni into play, followed by a devastating Hideous Laughter to wipe out Osyp's team. When the smoke cleared, the only creature left standing was the demon. Osyp did his best to mount some defense but the beefy Oni -- plus a timely Rend Flesh -- was too much for Osyp's battered life total to handle.

As both players went to their sideboards, the most noticeable thing was the silence. In complete contrast to when they first sat down, both players were now deep in concentration, with eyes distant and faces set. For now, there was just the game.

As the second game opened, Bernardo missed his third land drop but recovered a bit when he then found a land, followed by a Commune with Nature revealing Sakura-Tribe Elder. Osyp's deck had come out well with Hearth Kami, Ronin Houndmaster and then Kashi Tribe Reaver, but when Bernardo found another land and played Burr Grafter it looked like there was a real game on hand after all.

Creatures were played, combats ensued, and creatures died only to be replaced by fresh reinforcements, but because Osyp was able to match his opponent creature for creature, and often with larger threats, Bernardo wasn't able to get out from underneath the two-turn tempo advantage Osyp had picked up at the beginning of the game. A few turns later and Bernardo threw in the towel with a shake of his head. Back to silence, shuffling, and thinking for both players.

Bernardo's start looked much better for the third game, showing Nezumi Cutthroat on turn two followed by Commune with Nature for a second Cutthroat on turn three. Bernardo followed up with a Matsu-Tribe Decoy next, which temporarily saved him a world of hurt when Osyp summoned a Frostwielder to threaten Bernardo's Cutthroats, joining Osyp's curved-out start of Ember-Fist Zubera and Ronin Houndmaster.

Bernardo made a game of it, but once Osyp's Frostwielder recovered from its dose of Matsu-Tribe poison it began its grim task of mowing down Bernardo's army with the added help of a nasty Yamabushi's Flame.

The tide of the battle was swinging dangerously away from Da Costa Cabral, who had enough life left to play a bit of defense and hold on as long as possible for some kind of answer. That answer showed up in the form of Hideous Laughter, wiping the board clean and giving Bernardo a new start on this deciding game -- and one where he had more life to work with than his opponent. Both players were able to play out creatures post-Laughter, but Bernardo had the better recovery, and Osyp's precarious life total forced him into chump blocking before he could find some way to swing the game back around.

Bernardo was continuing on undefeated, and it was up to Osyp to find some way to pull out those remaining needed wins.