truth is, you've never heard of Donald Scot Sinclair. As someone who is attending only his second Pro Tour, he's certainly not famous. The only reason I know him is because he used to play at a little store in California where I played a couple years ago, The Davis Endzone. While I was in the Player's Lounge talking to one of the players about an article I was working on, I ran into Scot and we sat down to catch up on old times. 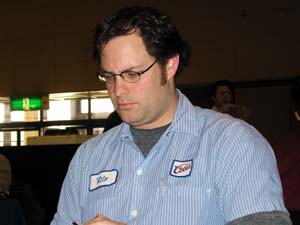 Sinclair is making the most of his second Pro Tour appearance.

There are many players that have become fixtures on the Pro Tour, players that are no stranger to the bright lights and big paychecks that the Pro Tour has to offer. But I'm guessing that Scot is more like most of you reading this article. He's played in some qualifiers here and there and enjoyed some modest success, but mostly he plays because the game is just really fun.

After a good run at some recent qualifier events, Scot discovered that he had qualified for Pro Tour-Nagoya on rating, and after years of wanting to visit Japan he decided this was his chance. He bought a ticket to Japan as soon as he got the okay from his boss to miss work and arrived here a week early to tour the country with friends that he met at a Grand Prix.

Having just arrived here from Tokyo, Scot is full of stories from his group's time there. When asked what his favorite memory was, he laughed and told me about how they had ended up at a mall filled with a sea of screaming teenage girls. Having trouble finding what they were looking for, they asked one of the ladies at an information desk where the men's department was. At this point the girls around them began giggling wildly as the information lady kindly informed them that this mall only sold women's products. For Scot, it's not that this was particularly embarrassing. Instead, it's a great example of how different things are here, and how much fun he's having because of that.

Scot goes on to tell me about many other things they've done, including riding the bullet train and seeing Mt. Fuji. As he's telling me all this, you can tell that part of him still doesn't quite believe that he's actually here in Japan having experiences like this, that's it's him in these stories.

At this point it was time for the next draft to start, so a confident 2-1 Scot headed off to the table ready to rejoin the battle. To be honest, I thought the story might end there, but after I finished covering Osyp Lebedowicz in the draft and subsequent round, I found out that Scot had been matched up against none other than Magic's current World Champion, Julien Nuijten. I wasn't able to find Scot to see how it turned out, but I did manage to find the champ.

When I asked him what happened, Julien said he'd lost that round. He gave me a slightly questioning look, and I explained that I knew his opponent from back in the day, that he was excited to be at his second Pro Tour.

Julien immediately smiled and said, "Hey, it's only my third Pro Tour."