hottest player, Anton Jonsson, has been tearing up the tables, preserving his undefeated streak into round 10. He wasn't happy with his red/blue draft deck. Unfortunately for him, across the table sat proud father Masashiro Kuroda. Though he claims to have invested less time into his game than in the past due to his growing family, Kuroda has manifested an uncanny ability to win in his home country, winning last year's Pro Tour Kobe and recently won Grand Prix-Osaka as a key member of P.S.2.

Jonsson boasted a wall of blue spirit defenders, Soratami flyers, and red removal highlighted by a pair of Earthshakers. In order to win the match, he would have to fend off Kuroda's savage beats. Kuroda boasted a tight curve of cheap, efficient black and green beaters backed by Kodama of the South Tree and prime removal. 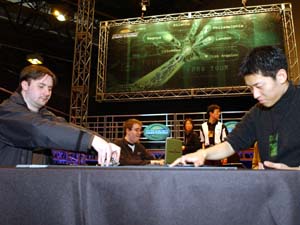 Jonsson, left, and Kuroda are titans of Magic.

This match could easily be a preview of the Pro Tour Final, as no one would be surprised to see these two face off Sunday afternoon. All the top table's players and spectators agreed that Kuroda had the strongest deck of the table. More spectators crowded around the match than any feature match to date, making it prime time Magic at its finest.

The pace started off at a crawl, as Kuroda's early Orochi Ranger and Villainous Ogre met a pair of Floating-Dream Zubera and decided to sit home. Jonsson built up his defenses and started to swing with a Soratami Mirror-Guard. The crowd grew restless as Kuroda eventually got his threats on the table, but Jonsson ruined the Pro Tour Champion's day by making an Earthshaker. Playing a River Kaijin, he cleared away Kuroda's men and drew four from his Zuberas. The Japanese crowd was dismayed as the massive one-sided destruction was enough to put Jonsson into the lead.

Kuroda threw out a much faster offense in Game 2, playing a Nezumi Cutthroat followed by a Kodama's Reach. He followed up with a Burr Grafter and another Kodama's Reach, then made a Budoka Gardener. Could the appprentice turn into a legend? With seven lands by turn 5, the flip could happen.

Jonsson stifled the beats by slapping a Mystic Restraints on Kuroda's Cutthroat. He then threatened to generate overwhelming card advantage by recruiting a Sire of the Storm. Kuroda mulled the situation carefully, and once again Pulled Under the Sire. Jonsson topdecked his Earthshaker as the watchers buzzed, but a pair of attacks boosted by Kodama of the South Tree and a Dance of Shadows came just in time for Kuroda to snatch the win away.

After a mulligan, Kuroda came out to the races yet again, kicking his attacks off with a Nezumi Cutthroat and Villainous Ogre. Blocking did not factor into his game plan. Jonsson tried to stabilize with a Kami of Fire's Roar and slapped a Mystic Restraints on the dastardly Ogre, but Kuroda had more tricks up his sleeve.

Kuroda recruited a Kami of the Waning Moon and Kodama of the South Tree. Jonsson prayed to draw an Earthshaker, but was only able to bring out a pair of Soratami Mirror-Guard. Kuroda's Nezumi Graverobber turned the battle into a massacre, and finished off the tall Swede by turning his own graveyard against him. The battle was tight, but Japan's first Pro Tour winner stopped Anton's hot streak dead in its tracks.

Both players are in prime position to make Top 8, and if future matches between the two are as memorable as this one, the crowd will go home happy. Stay tuned.