Kuroda has been causing quite a buzz, and not just at this event. Japan's first and only Pro Tour Champion first staked his claim on these lands last season when he took Pro Tour-Kobe and created history in the process.

As part of three-man super-team PS2, he's won back-to-back Japanese Grand Prix team events as well as winning the masters at Pro Tour-Venice. To top it all off, he's coming off a recent win just three weeks ago at Grand Prix-Osaka, which just happens to be his hometown. And, oh yeah, he just knocked draft superstar Anton Jonsson off the undefeated list, creating a three-way tie for first place between himself, Anton, and his next opponent. It's an impressive record regardless, but considerably more so when you realize that he doesn't really attend all that many events. 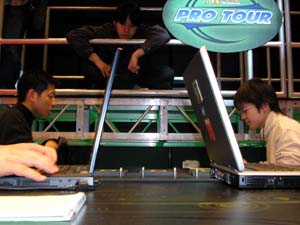 Shu Komuro doesn't have the list of accolades that Kuroda does, but he's well known to Japanese players as a strong competitor who attends lots of events and gets in plenty of travel. His best finish so far is a win at Grand Prix-Yokohama 2003, where he came out on top over 804 other competitors, but his current record of 10-1 here means he has a great shot at making his first Top 8 at a Pro Tour.

When I asked if they had played each other before, Shu quickly pointed out that he had defeated Kuroda in the GP Yokohama semifinal. Kuroda just as quickly pointed out that he'd been mana screwed both games, but he did it with a smile that was immediately matched by his opponent, who nodded in agreement. As they shuffled up, Shu sat up suddenly in his chair and declared that he had played Kuroda a second time, at Grand Prix-Sapporo. Kuroda confirmed this, and smiled when Shu pointed out that for that match Kuroda hadn't been mana screwed. More smiles all around, in complete contrast to the cold killer Kuroda had looked like while tearing Anton Jonnson down to their bracket. There was no doubt both these guys were having a good time.

And for Shu Komuro, that good time ended abruptly on turn two, when a Nezumi Graverobber showed up to spoil his fun. Nezumi Graverobber is already a powerhouse, but it goes even farther than that in a black-green mirror match like this one. With a deck short on answers (and none in hand), Shu was looking desperate over the next few turns, stuck on three lands and an Orochi Sustainer for mana, while his opponent had the luxury of six lands to rely on. Shu tried to find some way to keep the game alive without putting a card in his graveyard, but the more creatures Kuroda played out, the worse the situation got.

In chess there is a term called Zugzwang, which means that every single move a player could make would just make things worse. That's the nastiness that is Zugzwang - even though you know anything you do will actually make things worse, the game doesn't give you the option to just not make a move. Shu may or may not know the term, but he certainly knew what it felt like.

Desperate to find some way to break through and short on time, he used Waking Nightmare to remove two cards from Kuroda's hand and send his team in for some badly needed damage, but Kuroda was easily able to stabilize the board and devastate his opponent's position with Nighteyes, the Desecrator. A swift and brutal finish promptly booted Shu from a game in which he'd barely been able to participate. Their match records in the event may have been equal, but there was nothing equal about the matchup so far.

So, on to the second game, where Shu loaded up an entire dumptruck of fat and then emptied it all over Kuroda's board. Sakura-Tribe Elder accelerated him into Order of the Sacred Bell, a second Order of the Sacred Bell, Feral Deceiver, and even Iname, Life Aspect. Kuroda somehow managed to kill every creature that came before (and after) Iname, but the avalanche of giant monsters was too much to overcome.

As both players considered their sideboard options and shuffled up for Game 3, there was a noticeable change in the atmosphere of the match. The beating Shu had just delivered to Kuroda had clearly given him more confidence, as well it should have. Perhaps Kuroda was human after all? Perhaps he could be beat here in his lair?

The change wasn't just Shu, however. The genial Kuroda was gone, replaced by the remorseless machine of destruction that had dismantled Anton Jonnson the round before. That famous stare was back, and it was leveled squarely on his opponent, who surely had noticed the transformation. A turn-two Graverobber wasn't just put into play, it was snapped into play, loudly, a clear statement of dominance. Stuck with a handful of removal that couldn't kill anything on the table, spells that he couldn't afford to put in his graveyard, and no current way to kill the Graverobber, the situation was bad indeed for Shu.

In a repeat of Game 1, short (and then some) on options, Shu did the only thing he could do, emptying Kuroda's hand with Waking Nightmare, allowing Kuroda to empty his graveyard with the help of a Rat Wizard that found himself promoted to Legendary Badass. With the help of a Kami of the Waning Moon and a potentially super-sized Cursed Ronin, Kuroda blasted through the ranks, demolishing Shu in two swift attacks that left his opponent with no creatures in play and a fertile graveyard for Nighteyes to wreak his havoc.

Knowing his next card was a land thanks to a late Feral Deceiver, Shu knew it was over, and offered the concession with an embarrassed laugh at the state of his board. Whether wrecking ball Masashi Kuroda can be stopped in his homeland remains to be seen, but it won't be happening this round.