Oiso is the Japanese Gabriel Nassif. His deckbuilding skills and four Pro Tour Top 4 appearances have earned him respect both at home and abroad, with many Americans saying that they'd like to work with him more than anyone else. 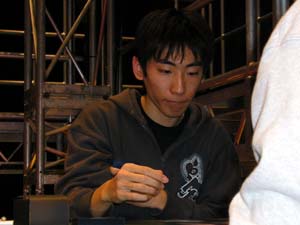 Gadiel Szleifer is part of Magic's new breed of stars. After giving up the JSS for the Pro Tour at only 14, he has gone on to achieve a startling amount of success, narrowly missing out on Rookie of the Year in 2004, and then kicking off the 2005 season with a Top 8 at Pro Tour-Columbus plus a Team Limited Grand Prix win as part of :B. Unfortunately for both of these players, their opening draft was rather unkind, forcing them to battle every round to stave off elimination from the tournament.

Gadiel quickly went down to the three-spell, nine-land draw to put him in a big hole in this struggle to survive. The 15-year-old suddenly found himself down a game only five minutes into the round, putting him precariously close to twiddling his thumbs waiting for the start of Pro Tour-Atlanta two months from now. And you thought your wait for the next round on Magic Onlinewas long...

Oiso kicked off game 2 with Nezumi Cutthroat, a major problem for Szleifer's blue-white deck to deal with. Mystic Restraints solved the rat riddle after only four points of damage, but Oiso just followed that up with an even more troublesome Marrow-Gnawer. Things were not looking good for Magic's teenage bad boy...

Blood Rites from Oiso added an additional wrinkle, but the real problem was that Szleifer couldn't stop plucking lands for the second game in a row. Oiso used his Blood Rites plus two Ember-Fist Zubera and another gnaw from a fearful rat to finish any thoughts Gadiel had of a comeback, and keep his own hopes for Day 2 alive.