feature match area could hardly contain the star power for this matchup. Both Osyp Lebedowicz and Masahiro Kuroda sport one Block Constructed Pro Tour title to their names, plus each has a Grand Prix title and a host of other accolades tacked on to their resumes. In addition to the accomplishments, both men are among the more likeable and photogenic Magic players their country have to offer. The interesting twist here is that neither player is considered a particularly strong Limited player in terms of Pro Tour results achieved, but that hasn't stopped them from locking up spots in Day 2 with equivalent 5-1 records. 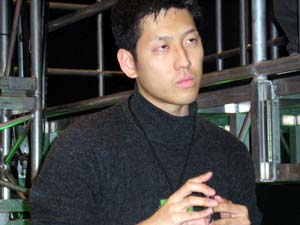 Osyp got off to a quick start in Game 1, using Sakura-Tribe Elder to accelerate into Sosuke, Son of Seshiro and a Brutal Deceiver. The Deceiver died in combat to Kitsune Blademaster plus Indomitable Will, and when the Blademaster gained some friends in Soratami Rainshaper and Samurai of the Pale Curtain, it was suddenly Osyp who was under the gun. The New Jersey pro used two Kodama's Reach to try to thin his deck out and draw some action, but he couldn't get around Kuroda's impressive ground forces and died to aerial beats a few turns later.

Kuroda played a turn-two Floating-Dream Zubera to hold off Osyp's Hearth Kami and added more defense when he cast Ghostly Prison on turn three. Order of Taco Bell and Sosuke added to the pressure, while Kuroda kept with the defensive plan by playing another Zubera and a River Kaijin. The three spirits triple blocked the Order, forcing Osyp to use Serpent Skin to save it, sending the Kaijin to the grumper. Matsu-Tribe Decoys entered the fray for Osyp as Kuroda was forced to start chump blocking to draw extra cards and keep his life total out of the danger zone.

Fortunately for the Japanese star, the four cards he drew from his Zubera deaths were quite good. Kuroda sprang into action, casting Teller of Tales and began his come back. He started by using Consuming Vortex to bounce Osyp's attackers and buy some time, masterfully counter-attacking with his fliers while using the Teller's tap abilities to stave off any additional smashings while Ghostly Prison continued to lock down Osyp's team.

Just when it looked like Osyp might take down the Teller with yet another attack, the last card in Kuroda's hand -- Indomitable Will -- saved it. Now Kuroda was on the full attack, swinging with his team of Hundred-Talon Kami, Rainshaper, and Teller to drop Osyp to five, and then dropping Soratami Savant behind it for more backup. Osyp drew his card and shook his head, extending the hand to Kuroda in admission of defeat.