to the traditional Pro Tour feature match between the two undefeated players from Day 1. This event featured a Pro Tour giant facing off with the hometown hero. About the only thing these two players have in common was the Reverse the Sands they each played in their first draft Friday. 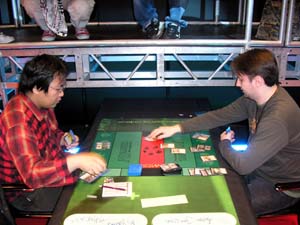 Shiozu, left, and Jonsson were the only undefeateds after Day 1.

Anton Jonsson has made Top 8 appearances in the last two Limited Pro Tours -- Pro Tour Amsterdam and San Diego -- and is the true embodiment of the Limited specialist. He loathes Constructed Magic and had planned on eschewing Constructed events for the remainder of the season. Now that he is going to be thrust into the fledgling Player of the Year Race he may have to reconsider that decision (he regards preparing for Constructed as "work" while preparing for Limited as "fun"). He travels the world and has friends all around the globe

Also 7-0, Ryouma Shiozu is not even as well known in Japan as Anton is to the rest of the world but he does not come to the table with a blank resume. He has made the Top 8 of three different Grand Prix events and was in the Top 8 at his National Championships two years ago.

Anton kicked things off with a mulligan on the draw for Game 1. He shuffled thoroughly -- a lesson to keep in mind for all you aspiring PTers out there -- and kept the next set of six. Shiozu came out swinging with Orochi Ranger and impulsed for Order of the Sacred Bell on turn three, although he would have preferred to keep any of the four lands he pushed to the bottom. Anton had a turn-three Kami of Ancient Law that traded with the snake. Shiozu was stuck on two lands and ended up discarding twice.

Anton was stuck on three and could not take advantage of his opponent's poor mana with a pressure-less Kitsune Diviner as his only creature. Anton only missed his land for one turn before finding number four to fuel a Nagao, Bound by Honor. The third land finally arrived for the Nagoya native and he was able to dispatch Nagao with Rend Flesh before it started to hurt.

Anton thought for a while before Befouling that third land and sent Shiozu back to work at achieving threshold. Anton followed up a Gutwrencher Oni with Harsh Deceiver while the Japanese player floundered on two lands -- Forest and Swamp wouldn't even let him cast Distress. While the Japanese player was pitching cards he could not cast Anton was pitching gold to his Oni…Hideous Laughter…Rend Spirit…

The Scandinavian player added a Kabuto Moth to his mounting army. A third land meant a Rend Spirit was in the Oni's future after discard. Shiozu chump blocked Harsh Deceiver with an Eggwatcher and Befouled the Moth on his own turn. He was at two by the time he stabilized with his Order of the Sacred Bell standing in the path of the Deceiver. Anton had Swallowing Plague and sent the Japanese player to one. He added a Blademaster.

Shiozu had two plays -- Orochi Sustainer and Sakura-Tribe Elder -- to block both and he did just that. Anton flipped a land with the white Spirit and was able to kill both blockers. That was game as there was nothing for the Nagoya product to play in his hand but Spirits which would just get tapped by the innocuous looking Kitsune Diviner that was just lurking quietly in the corner the entire game.

Ryouma agonized over a hand that featured three Forests and a couple of playable cards. He pitched it back only to get double mulliganed by a Distress on turn two -- Swamp, Sachi, Eggwatcher, Sacred Bell. He lost the fleshy 4/3. Ryouma chose not to sacrifice his Tribe Elder and beat down instead. He played his Swamp and hatched the Eggwatcher. Anton had no play and passed the turn. The Elder kept up the beats but the snake machine stayed back to spit out its offspring. Anton played Nagao and Sachi, Daughter of Seshiro landed for Shiozu

Anton tried to determine if he had and attack with Nagao into the assembly line of 1/2 snake tokens but only sent in his flier -- despite having Shiuzo in the hizzo. He made another flying Kami instead. Rend Spirit sniped one of them down while the Eggwatcher kept on spawning. Anton Befouled the fertile flipper and flew over for two. The score was 18 to 12 in Anton's favor. He could win in two turns with his flier and feared-up Nagao. Instead he swung for two and tapped out for Kami of Lunacy.

Ryouma had to use a Devouring Greed as a straight-up Syphon Soul. He was dead a turn later. Shiozu was hoping to find one of his two Seshiro, the Anointed. He could have attacked with five snake tokens -- leaving Sachi back -- and hopefully drawn into either of his Rends to take down one of the two threats.

Respect for the Overrun-type ability is why Anton left back the Nagao, as opposed to trying to kill him over two turns with the flier and the evasion provided by Shizo, Death's Storehouse.

"If I attacked with Nagao and he drew one of the Seshiro's I would just be dead," said Anton.

Anton was now the only undefeated player in the tournament with an 8-0 record. It would require a colossal systems failure for Anton to miss the Top 8 from here. He can afford to take three losses over the next seven rounds and still have to set a wake-up call for early tomorrow.

Like many players, Anton put in countless online drafts to prepare for this event. His results this weekend are vastly different than his practice drafts.

"My opening hand had three Swamps and Nagao," laughed Anton. "On MODO I never, ever draw the Plains. Plus my opponent never mulligans."