Kuroda is a master of his realm. He won Pro Tour–Kobe last year and then won Grand Prix–Osaka as a member of PS2 earlier in January, and was now sitting at 7-1 here in Nagoya. Interestingly, he doesn't have a string of average performances in between these events. So far he has declined to leave the island of Japan, so this has been his first Pro Tour since his win in Kobe. Conveniently, the World championships will also be in Japan this year, giving him a chance to cap what has started as a very strong season. 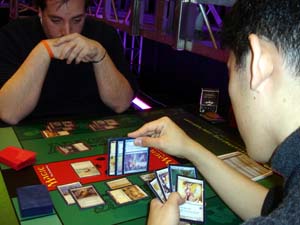 Jeroen Remie won Pro Tour–Seattle 2004 as part of Von Dutch and has two other Top 8s to his name. He's been a top Pro Player for several years now and is looking to follow up on his success.

In the first game, Kuroda's white-blue deck gummed up the ground, but Remie had the edge with an early Nezumi Cutthroat. Kuroda was in even more trouble when a Kabuto Moth resolved on Remie's side. He raced as much as he could, but it was all over when Remie slapped Devouring Greed onto the table. Despite being at a reasonable life total, Kuroda didn't even bother to bluff the counterspell and they were quickly on to the second game.

Preparing for Game 2, Kuroda brought in the anti-Spirit plan.

The second game started slowly as both players put out double Kitsune Diviner, but Kuroda was the first to strike with a Soratami Rainshaper. The rest of the game had, understandably, ground to a halt. Eventually Remie mustered his own threat in the form of Villainous Ogre, but he was behind in the race. Kuroda was content to just keep attacking for two, but when he drew Counsel of the Soratami, he cast it to search for a fifth land.

Not finding it, he passed on casting the third Kitsune Diviner so that he could have Blessed Breath up, conscious of the fact that this was the first time in awhile he'd tapped below Rainshaper mana. Good thing too, as Remie immediately attempted a Befoul.

The two creatures continued to race, but Kuroda still had the advantage, especially when he added a Kitsune Blademaster to the team. Still, Remie was willing to send his Ogre in, and Kuroda respected the possible tricks by tossing an extraneous Diviner in front of it. Remie played out Wicked Akuba and then fell to two on the return attack.

He then sent Kami of Ancient Law and Villainous Ogre, hoping to make something happen. Kuroda committed the Blademaster to the Ogre and let the other through. Indomitable Will targeted the Ogre after first strike, but Kuroda let it all resolve despite having both Consuming Vortex and Candle's Glow in hand, realizing that the death of his Blademaster wasn't all that relevant.

When he attacked back in the air, Remie shrugged and scooped.

Kuroda sideboarded again, bringing in the Ghostly Prisons and removing some Spirits.

Remie also did some sideboarding, bringing his total configuration to this:

Remie started off the game with a turn-two Nezumi Cutthroat, which slid past a Kitsune Diviner, but Kuroda had turn-three Ghostly Prison to slow things down. Remie was happy to pay the tax and send the Cutthroat again.

On his fourth turn Kuroda made a Sensei's Divining Top and passed the turn, but activated it when Remie attempted Kabuto Moth. He saw Hisoka's Defiance, Plains, and Teller of Tales, with no lands in hand. Eventually he chose to turn the Top in for the Hisoka's Defiance and countered the creature.

When Remie attacked again, Kuroda cast Sift through Sands spliced with Candle's Glow and gained two life while drawing some cards. He then untapped and made a Kabuto Moth and the Top, leaving up a Plains to possibly bluff Blessed Breath. Remie called him on it and immediately Befouled the Moth, sending it to the graveyard. Kuroda just used the Top on end step.

Down came a sixth land and Sire of the Storms, but he fell to 10 from the Cutthroat. Devouring Greed had to be a concern at this point, with two Spirits in play on the opposing side. Kuroda's hand was now Consuming Vortex, Teller of Tales, Candles' Glow, and Reverse the Sands. This posed an interesting dilemma, as he wanted to fall low on life to abuse the eight mana White card, but he needed to stay out of Devouring Greed range as he'd already used his Defiance. He summoned Teller of Tales and was done with his turn.

The Cutthroat rumbled in, and after some thought he simply cast Candles' Glow to gain 2 life and draw a card. He could have spliced Consuming Vortex, but realized he wouldn't gain much from it, as Remie was flooded and had plenty of mana to replay creatures at this point. Kuroda then played a land and was done again, and the Cutthroat knocked him back down to 10. He played an eighth land, now having access to Reverse the Sands.

The rat knocked him to 8 but Remie still couldn't put any additional pressure on the Japanese player. Kuroda activated the Top and only looked at the top card, but Remie corrected him, showing three fingers. "Not a Deceiver," Kuroda grinned sheepishly. He checked the top three instead, then bounced a Mothrider Samurai with Consuming Vortex, tapped a Lantern Kami, and drew a card. He checked the top three cards again, rearranged, then put four mana in his pool and burned down to 4.

Reverse the Sands hit the table and he attacked in the air for the win.

Jeroen shook his head, ruing one of his earlier plays.

1 Reverse the Sands 1 Counsel of the Soratami

1 Sire of the Storm