player Vasilis was playing in his third Pro Tour, although his previous best record was something along the lines of 2-3. He -- and Jeroen -- were 9-2 to this point. Although Jeroen's reputation precedes him (he has three Pro Tour Top 8s with a big check to show for one of them), he and Vasilis knew each other from the European tournament scene. Vasilis finished in the Top 8 of Grand Prix Brussels with Julian Nuijten, Kai Budde, and winner Tobias Henke. 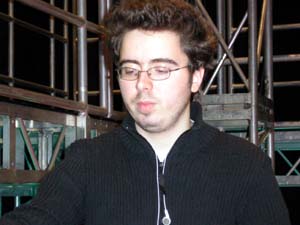 Vasilis Fatouros is the sole Greek player at PT Nagoya.

As these two players sat down to determine the winner of their draft table, they compared opponents from the draft. "I don't know," strained Remie. "I played two guys I never heard of."

"I beat Osyp and Frank Karsten," downplayed the Greek player.

"You beat a couple of better guys then me. I'm not going to lie."

Vasilis, the lone Greek player in the tournament, didn't think anyone should be especially impressed with his performance. "They probably had better decks than me."

Jeroen laughed, "I heard you got pretty lucky."

"I did get screwed in the draft by that guy to my right."

Jeroen, whose deck shared Forests with Vasilis, sympathized, "There were only four green drafters at the table when this guy decides there might as well be five."

Game 1 was a methodical game with Jeroen simply playing out his deck. Devoted Retainer, Nagao Bound by Honor, Kabuto Moth, Innocence Kami, and Cage of Hands over the first six turns. Vasilis, who was playing green-blue with a touch of red, could find no answer for the legendary samurai and the game was over in short order.

Vasilis kept his hand for Game 2 while Jeroen shipped back an assortment of white cards that were accompanied by Forests. He peeked at the top of his deck and grimaced at the Plains that was taunting him with a lost opportunity at back-to-back turn-four Nagaos. He kept his next six and the game got underway.

The game looked to be in Jeroen's control as the two players traded soft blows. Jeroen seemed to be in great shape when he attempted to Reciprocate a Soratami Mirror-Guard only to have his spell countered with Thoughtbind. Vasilis did not have much to add to his board by the middle turns but when he cast a turn six Kodama's Reach, Jeroen began to slump in his chair. Sure enough, the Greek player finished him off with Strength of Cedars a turn later.

Both players kept their hands. Vasilis made the first play with a Sakura-Tribe Elder. Jeroen had a Kabuto Moth and Vasilis accelerated into a turn-three Soratami Savant. Jeroen had Cage of Hands for the flier and added a Devoted Retainer to his board and let the Moth get in for a rare point of damage.

Neither player was happy with the cards offered up by the top of their decks. Jeroen had no turn-five play while Vasilis used his abundant mana to play Dripping-Tongue Zubera and Order of the Sacred Bell.

Burr Grafter came down for Remie who was choking on all of his lands while it was still unclear what Vasilis was shaking his head about as he played Soratami Mirror-Guard and Kami of the Hunt.

Vasilis began to peck away at Jeroen's life with the Mirror-Guard's ability to make the Kami unblockable. Jeroen managed to keep that from getting out of hand with Blessed Breaths that were vessels for Candle's Glow. Jeroen also tried to kill the Soratami Mirror-Guard -- which had been held back by a Cage of Hands -- by forcing it to block a Matsu-Tribe Decoy. Vasilis had the Serpent Skin and was able to save it.

He also had the Strength of Cedars -- something that was obvious to Jeroen as soon as the Greek player sent all of his men sideways into battle. Vasilis completed the trifecta, beating two different Pro Tour winner's along the way. At 10-2 heading into the final draft it is conceivable that he go 1-2 at the final table and still make the Top 8 -- making him the first Greek player to achieve that level in Pro Tour history.

Jeroen will likely have to go 2-0-1 if wants to extract some revenge upon the little Greek player that could.