Hometown pro player Ryouma Shiozu's back was up against the wall. With a black-green drafter two seats ahead and two seats behind him, he had a hard time putting together a meaty army. A trio of Villainous Ogres and cheap spirits constituted his early drive, while Befouls, Rend Spirit, and Rend Flesh would hopefully clear the opposition. Winning this game would cement his hopes for playing Sunday. 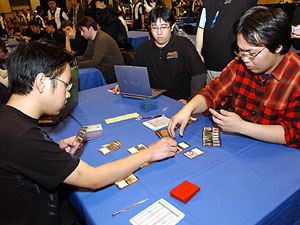 Soh, left, and Shiozu had the Top 8 in their sights.

While few Japanese pros know his name, Terry Soh has made an impact in Asian Magic. Coming off of a top 8 performance at Worlds, the Malaysian ranked third in Composite in Asia. Soh vacuumed up tons of removal with Cage of Hands, Reciprocate, and Rends of his own. Soh's army had a solid batch of fliers and a few early cheap blockers. With a solid soulshift curve, Soh felt confident in his chances.

Soh won the die roll and chose to draw first, to Shiozu's surprise. So far this weekend most players have been choosing to play first, but Soh anticipated that the card advantage was worth the loss of tempo.

Shiozu faced a horrid situation in Game 1, unable to muster a defense. Soh sent a Cruel Deceiver and Ashen-Skin Zubera to knock Shiozu down to low single digits. Shiozu brought out a Villainous Ogre, but it met a Rend Flesh. With no other creatures in hand, Shiozu threw away a Soulless Revival to bring the Ogre back, hoping to start a damage race and topdeck.

But the Malaysian crushed those dreams, playing down a Honden of Cleansing Fire. His Cruel Deceiver and Zubera kept coming over to the other side, and Shiozu soon quickly fell.

The second game was a short, bloody affair. Shiozu's inexpensive troops lined up rapidly to pummel his opponent. Budoka Gardener and two Villainous Ogres came over, and while Soh made the first creature, Nezumi Cutthroat, he just couldn't keep up with the efficient attackers. In a matter of minutes, the match was tied up.

The battle of tempo swung to Soh's side, as he played a Cruel Deceiver, Ashen-Skin Zubera, and Honden of Cleansing Fire. While Shiozu's ogres made yet another appearance, they couldn't crack through Soh's disposable blockers. Every turn, Soh's life crept higher and higher, and that situation spelled nothing but trouble for Shiozu. He tried to turn the situation down by playing his best creature, a Moss Kami, but Soh had the Cage of Hands to neutralize that threat.

Six mana is a lot to pay for a 3/2 flier, but Soh had picked up three Kami of the Palace Fields in his draft, and he gladly played one along with a Gibbering Kami to lock up the game. A late Budoka Gardener on Shiozu's side showed up and flipped, but it was too late to stop Soh's flyers.