"The Mauler" Evans was hoping to make the second Pro Tour Top 8 of his career -- he last appeared on that stage in San Francisco at the end of last season. He started this tournament off on fire with a 6-0 performance playing blue-red decks under the tutelage of Rochester sensei Jeff Cunningham (Cunningham was also responsible for Aeo Paquette drafting Affinity at this same event last year). 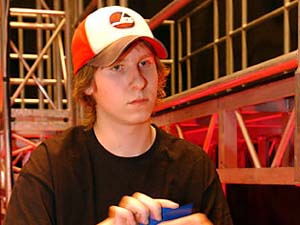 The Mauler eyes another target.

He failed to heed Jeff's advice in the third draft, and without blue-red he promptly plummeted to 6-3. Always responsive to negative reinforcement, Murray went back to blue-red and has rattled off four straight wins. He needed to win this round in order to be able to draw his way into the Top 8 during the final round.

"This is the first time I have felt nervous all weekend."

His opponent was France's Julien Goron. Julien has been playing Magic for a long time --six years -- but has only recently found success on the Pro Tour after a 19th place finish in Columbus on the strength of blue-green Madness. When asked for the reason behind his sudden burst of success Julien explained with a laugh, "I stopped studying."

Guardian of Solitude was Murray's opener while Julien kicked things off with Samurai of the Pale Curtain and Konda's Hatamoto. Murray got in for one with a flying Guardian when he played Kami of Fire's Roar. The Kami was imprisoned in a Cage of Hands.

That was fine, with Murray who threatened to dominate the board with a pair of Frostwielders over the next two turns while Julien played a nervous Kami of Ancient Law in between them.

Julien sent in everyone and Murray blocked Kami of Ancient Law with Guardian of Solitude and shot it to death EOT. He untapped into Kami of Fire's Roar with both shooters active. Julien attacked with the Pale Curtain and Murray shot it twice. Julien saved it with Otherworldly Journey. Murray did three points to it during his own turn by shooting it twice and untapping a pinger with his pet card --Psychic Puppetry.

Julien hoped to slow things down with Ghostly Prison but Murray pressed his advantage by paying four and attacking for four with his Tommy Guns blazing EOT. Julien reciprocated one of the pingers but Murray just kept on coming. Julien tried to stabilize behind Kabuto Moth and Floating-Dream Zubera but Murray cast Yamabushi's Storm on his next turn and shot the Moth -- Julien packed it in.

Murray looked through his sideboard -- paying attention to every card in his colors to make sure it didn't offer him some advantage in the match-up. He even reread Swirl the Mists before deciding against any changes. He sent back a one-land hand after Julien decided to keep his initial set of seven. He kept the second set.

Goron played Kabuto Moth and Murray assassinated it at the end of the turn -- plain ol' one for one with the Glacial Ray. Goron followed up with Kitsune Healer and Murray came back with Soratami Mirror-Guard. Julien added Mothrider Samurai.

Soul of Magma landed on Murray's side of the table while the Frenchman added Kami of Ancient Law.

An unblockable Soul of Magma got in for one -- thanks to Healer. Julien slowed things again with Ghostly Prison. Frostwielder created some sort of parity with the Healer but Julien was beating for four a turn. Murray looked to turn things around with an Earthshaker but Julien countered it with Hisoka's Defiance.

Four more came over and Murray fell to 10. On Julien's next attack, Murray put his Soul of Magma and Mirror-Guard in the way. Julien prevented a point to the Mothrider after Murray shot the flier. When Julie tried to save it with Otherworldly Journey it was Murray's turn to counter a spell and Julien's board was blank. He Reciprocated Frostwielder

Murray struggled to get past the Ghostly Prison for more than a point or two a turn. Uyo, Silent Prophet gave Julien a chance to get back in. Murray played a Cloudskater and dug frantically for an answer. He needed to find an answer that did not involve a spell since what is good for the Uyo is good for the other side of the table as well. He found Pain Kami but only had enough manna left to get it into play. Murray fell to five on the one attack from Uyo before it fell to Pain Kami. Murray had enough mana left over to get his Cloudskater in for one point.

The top of Julien's deck started giving with the goods and he played a Teller of Tales, Hundred-Talon Kami, and Soratami Mirror-Guard. Despite digging away with the Cloudskater, Murray did not find anything nearly as good near the top of his deck and they were quickly on to the rubber game of the match.

Murray mulliganed to lead off the third and final game of the match -- this time on the play. His second hand was fine and he played a Cloudskater right on time. Murray had no play for turn three and his Cloudskater was Reciprocated. Murray got some revenge when Julien's Kabuto Moth was countered.

Julien played a Kitsune Healer and Murray untapped to splice Glacial Ray onto Psychic Puppetry. Julien regrouped with Kami of Ancient Law and had enough mana left over to counter Soul of Magma. Julien came in for two but had no follow-up during his second main phase.

Murray's Pain Kami brought an unpleasant look to Goron's face. He played a Hundred-Talon Kami and Murray came back with Guardian of Solitude. Samurai of the Pale Curtain joined Julien's mounting army while the Kami flew over for some damage.

Murray sent his Pain Kami to the air with a River Kaijin courtesy of the Guardian. Julien cast Call to Glory and untapped his Kami to block in the air. Murray finished it off with an extra point from the Pain Kami's ability. Julien wanted to soul shift his countered Kabuto Moth from the third turn but Murray helpfully reminded him of the Samurai of the Pale Curtain in play.

Murray ripped a second Glacial Ray off the top and killed both of Julien's 2/2 creatures. He did not have much of an offensive presence and the best thing that could be put in Cage of Hands was the Guardian of Solitude.

Murray played Frostwielder and went to work at nibbling Julien to death. He added an Ember-Fist Zubera while all Julien could add were lands. He found a Kabuto Moth but Murray killed it with Yamabushi's Storm and a shot from the Frostwielder.

Murray played his Earthshaker and Julien moved his Cage of Hands and played a Kitsune Healer. A turn later when Murray sent in "the team," Julien blocked Guardian of Solitude and attempted to prevent a point of damage when Murray shot it. The Mauler Squelched it and the Healer died.

Although by this point Murray had a handful of burn spells he was content to nibble away and play around Candle's Glow. All Julien had were more lands.

Murray "The Mauler" Evans would be making the second Top 8 appearance of his career if he could draw in the final round. Jeff Cunningham was watching along the rail and smiled approvingly at his "student."

"That Glacial Ray was a nice rip."

Murray smiled and waved it off, "Yeah but Psychic Puppetry would have been just as good."