Jonsson can't seem to get a break.

That's the first thing that comes to mind when you see him at this table. Losing what by all accounts was an amazing match against Shu Komuro (where Anton was paired down), his entire demeanor now sags with frustration and baggage. Formerly undefeated at 9-0, and then joking about the curse Osyp had laid on him earlier in the day, he's lost an amazing four times since, while only picking up one more win in the process. With just this round and one more to go, the winner of this one is likely to make Top 8, while the loser will probably need to win out and hope on tie-breaks. 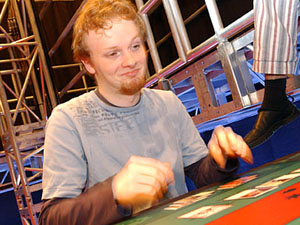 Karsten drives a hard bargain with his red-white deck.

Why? Well, in addition to everything else that's gone wrong for him this afternoon, he now finds himself paired against Dutch Pro Frank Karsten, who's coming fresh off a win with a white-red hotrod that feeds on rocket fuel and does 20 to 0 in about six turns flat. Judging by his expression and body language, Anton wasn't doing anything to hide how strongly he was wishing he could be at any other table in the event right now.

Anton rolled his eyes in slight disappointment when he lost the die roll to go first by one with a look that said "yet another thing to go wrong," but he was surely feeling better when Karsten quickly mulliganned his first draw. Karsten pitched his second hand as well, which contained two lands but was bogged down with several spells he was unlikely to have the time or mana to cast. As Karsten shuffled you could almost see a gleam of hope in Anton's eye.

It didn't last long. Looking for a fast start, aggression was exactly what Karsten found when he got his third starting hand of the game, opening with Kitsune Blademaster, then Ronin Houndmaster swing for 4. Turn five was an attack into Anton's creatures, aided by a surprise Call to Glory, and Anton looked positively disgusted when next turn Karsten played out both Eight-and-a-Half Tails and a red Honden that was sure to mow down his creatures.

Anton drew his card for the turn and showed his hand in frustration, not remotely in this game against an opponent who started with just five cards. And at that moment, somehow, Anton managed to look even more beaten than before.

If Game 1 had Anton down, it's unclear whether Game 2 was a mugging or a mercy killing. Karsten's deck roared forward at full throttle this time, fueled by a full eight cards for turn one rather than the five he'd started with in the previous game. Here's each of Karsten's plays of the game, by turn.

On turn five, Karsten played a Ronin Houndmaster and seemed to have something else ready for the turn as well, but Anton had already thrown in the towel, looking ill, unabashedly admitting that he'd hoped to play anyone else rather than the Dutch player.

Anton, who has four Pro Tour Top 8's, pointed out that he had never missed a Top 8 once he was on the bubble, so he was dearly hoping he could somehow fight his way in during the final round. Karsten smiled and said that he'd missed the Top 8 all six times he'd been on the bubble, and was clearly happy to be adding a first PT Top 8 to his four Grand Prix Top 8s.

Anton wished him good luck, saying it was probably justice that Karsten was getting his shot. For Anton, with just 12 minutes of the round expired, it was off to what would surely be a very long wait for the round of reckoning.