Jonsson was trying to brake a runaway truck. After beginning the weekend as the only player to go 9-0 in the first three drafts he lost control of the road and veered all over the place in need of only two wins to lock up the Top 8 spot that seemed all but his. He managed to get one of them in the fourth draft pod but in the final pod of the day he was 0-2 and even with the elusive second win he was still not guaranteed to see Sunday action.

Last round he fell to Frank Karsten, and despite his powerful cards felt he had no chance in the match which was over in something like ten minutes. 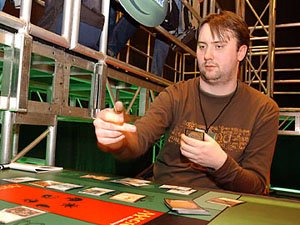 After a fast start, Anton struggled down the stretch.

"Frank mulliganed to five and slaughtered me. Then he didn't mulligan and he slaughtered me even faster. Oh well…time to not screw up."

Kentaurou Ino is a Chiba product having the breakout tournament of his young career that has only seen him win a smattering of money at Asian Grand Prix events with no standout finishes. The Japanese spectators crowded along the rail to see if he could topple the Limited specialist. Ryuchi Arita sat in the middle of the onlookers, his face nervously pressed against the rail.

There were no plays for three turns until Kentauro built a Ghostly Prison -- Anton was holding Hinder but held it for something more menacing. Kentauro had nothing of the sort -- no one is scared of Kitsune Healer -- on turn four and Anton played the blue Honden with Hinder in the bank.

Anton took two from the healer and Ino added a Kami of the Painted Road to the board. Anton sighed -- he had Godo and his maul in hand -- and had to play the legend unkicked. He took three from the Kami -- the healer prevented him from trading Godo for it -- and Ino sent the turn back with no play.

Anton attacked with his Godo -- after determining that he would need to pay twice for the Prison to avail himself of the extra attack -- and then played out Floating-Dream Zubera and Hearth Kami.

Kami of the Painted Road came in and Anton put the Zubera and legend in its path -- Ino put the damage on the legend. Ino had nothing but mana and passed the turn only to find himself looking down the barrel of Kumano, Master Yamabushi. The Japanese player parlayed Reach into White Honden and passed the turn.

Anton played the Maul and equipped it to his legend -- Ino took a ton. Kami of Old Stone provided no long term solution as the Kumano only needed one activation to get over the top of the healer.

Ino finally drew something -- sort of -- and he was able to dig three deep with Petals of Insight. The resulting Soratami Rainshaper was quickly shot down. Anton untapped and did the same to the Healer after bashing in for seven.

Ino found nothing of use on top of his deck and scooped shortly thereafter. Anton was one game away from having a shot at salvaging his tournament.

Anton looked flat out nervous. He had been in the driver's seat throughout most of this tournament and probably never expected to be playing for Top 8 in the final round.

Devoted Retainer with no follow-up on turn two was Kentaurou's opening. Turn three saw a Rainshaper make a brief appearance before being bounced end of turn with Consuming Vortex. Anton untapped into River Kaijin. All Ino could do was replay his Rainshaper.

Anton's Soratami Savant was a tad better with Kumano was in the wings. The red legend made his debut shortly after Ino's Callous Deceiver. Anton took two from the flier and waited to untap with his Masticore at the ready. Ino had another Retainer but that was not going to raise any sweat on Anton's brow.

He passed the turn with mana up and Ino played Mystic Restraints end-of-turn on Kumano. Anton took that opportunity to shoot the Rainshaper. He could pick off the Retainers at will later. He shook his head…realizing that he had not used the Savant's ability to counter the enchantment.

Reach through Mists found Anton his sixth land -- Ino considered countering the card drawing spell. He played one his own and drew two cards at the advice of the Soratami. Anton continued to bide his time and picked off the remaining creatures on Ino's side of the board one by one before finally sending in the team of River Kaijin and Savant. He added a Rainshaper to his board as well.

Ino tried his hand at a Mothrider Samurai but Anton chose to return a land and counter that spell. Anton had Kumano -- albeit locked down with the Restraints -- Savant, Rainshaper, and Glacial Ray in hand. There was nothing that Kentaurou's blue-white deck could offer to deal with that lock down.

Anton sighed with deep and visible relief but then realized that he still needed to worry about his tiebreakers.

He could find no satisfying answer as he looked over the standings -- he had an edge over his nearest competitors with the same points coming into the round but anything could still happen. "At least it's not sickeningly close. If not maybe I will find out what ninth feels like."

"I guess I finished ninth once at Nationals…" reconsidered Anton. "In 1998!"