the spectators hoped for a climactic struggle between Japan's sole Pro Tour winner to date, Masashiro Kuroda, and Anton Jonsson, who tore up Day 1 before struggling to advance to Sunday. Jonsson managed to draft a solid blue-red concoction. Multiple copies of Teller of Tales, Yamabushi's Flame, and a diverse mix of Soratami gave him a solid, versatile force to field. The Soratami tribe's many abilities gave Jonsson a wealth of on-board tricks to exploit. 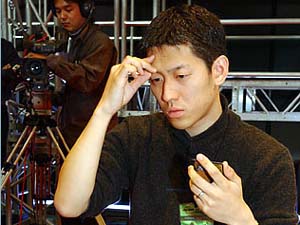 Masashiro Kuroda entered the Top 8 as the No. 1 seed.

Kuroda's army was slightly expensive, but had all the tools necessary to win the day. Three copies of Mothrider Samurai could trade with Jonsson's Tellers. More Kami of Ancient Law and Kitsune Riftwalkers would keep the pressure on. Given enough time and a lack of Soratami trickery, a trio of Sokenzan Bruisers would cavort through Jonsson's mountains to clean up late in the game.

Kuroda had the tactical advantage. With four copies of Indomitable Will, he could thwart Jonsson's Yamabushi's Flames. Jonsson's deck had no similar way to deal with Kuroda's spot removal.

Kuroda's wife anxiously looked on and for the first time in the tournament, Kuroda put on a stern, serious demeanor. Jonsson won the die roll and chose to play first. He drew a hand with no land and sent it back. Kuroda was content with his hand.

Kuroda roared out of the starting gates, sending a Kami of Ancient Law and Kitsune Riftwalker at Jonsson. Jonsson threw a freshly cast Soratami Mirror-Guard in the way of the Riftwalker, so Kuroda threw not one but two Indomitable Wills on the wily Fox. The 4/5 beatstick came at Jonsson for six turns. Jonsson tried to make a comeback with a Soul of Magma and Earthshaker. But he couldn't throw enough blockers in front of the Riftwalker, and swiftly lost the first round.

If fellow Top 8 player Murray Evans had been watching, he would have sternly disapproved of Jonsson's sideboarding tactics. The Swede sent his Battle-Mad Ronin to the sideboard and brought in Akki Avalanchers as an early rusher that could foil the Sokenzan Bruisers. 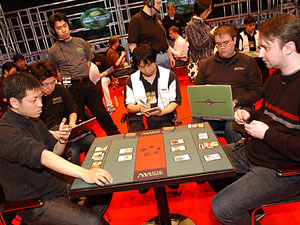 The Magic titans were even after two games.

Once again Jonsson chose to play first, and kept a less-than-promising hand of three Islands, two Mountains, a Soratami Cloudskater, and a Brutal Deceiver. It wasn't the opening he had hoped for.
Kuroda mulliganed, and churned out a solid line in the form of Kitsune Diviner, Kabuto Moth, and a Mothrider Samurai. Jonsson made a Soratami Cloudskater and Teller of Tales, but had to keep his men home.

Then the infamous mana flood hit Kuroda. For turn after turn after turn, he drew lands and defensive spells, and not a single creature. Jonsson couldn't believe his luck as he used his Cloudskater to amass a massive flying force, and a pair of Teller of Tales combined with Eye of Nowhere wove together a quick win.

Tension rippled throughout the third game. After a mulligan, Kuroda led off with a Diviner. Jonsson made an Akki Avalanchers and a Soratami Cloudskater. Both brought out little men, and while Kuroda had a Kabuto Moth on his side, he didn't have the Indomitable Wills to allow it to work its combat magic. Using the Cloudskater's ability once again to turn useless land into threats, Anton made a Teller of Tales and Soratami Mirror-Guard. Then Kuroda's first Sokenzan Bruiser hit the table.

Jonsson was under the gun. The only way to handle the Bruiser was to return his mountains to hand or sacrifice them to his Avalanchers, and reserve a Yamabushi's Flame for the inevitable Indomitable Wills, Kabuto Moth pump, and Candles' Glow. He managed to spend three cards to rid himself of the first Bruiser, and he traded another three to deal with a second mountainwalking ogre. All that he had left was the Soratami Cloudskater. Both players agonized as, turn after turn, Kuroda would send his troops and come out slightly the better in board position.

But Jonsson was saving for the future, not the present, and he pulled off an incredible defense and managed to recover with a board of Soratami Mirror-Guard, Soratami Rainshaper, and Soul of Magma against a pair of Mothrider Samurai. Kuroda threatened with a Takeno, Samurai General and his last Sokenzan Bruiser, but an Eye of Nowhere tapped down his flying Samurai. Both players gasped at the end of the furious battle as Jonsson took the game.

Silently, the two players shuffled up for Game 4. Kuroda took the offensive with an early Kitsune Diviner and Riftwalker. The Riftwalker attacked into a Soratami Cloudskater and received an Indomitable Will, but Jonsson knew to nip the armored 3/3 in the bud and used a Yamabushi's Flame to neutralize the card advantage. 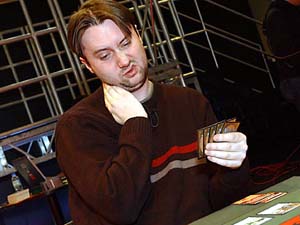 Jonsson took over tempo in Game 4.

The action paused briefly, as both players reinforced their sides. Jonsson's Soul of Magma stood poised to scorch away Kitsune Diviner, so Kuroda dialed up the senior legend, Takeno, Samurai General. Jonsson burned away Takeno and added a Rainshaper and Brutal Deceiver to his side. The tempo loomed in favor of the Swede.

The veteran Kuroda went back to the well and amassed defense in the form of two Mothrider Samurai. Candles' Glow kept him alive in a vicious exchange, but Anton kept drawing more and more gas. Teller of the Tales, Earthshaker . . . suddenly the balance of power was in the Swede's favor. Kuroda was unable to draw another threat. When Jonsson made another Teller of Tales, Kuroda offered the congratulatory handshake.

Anton Jonsson defeats Masashiro Kuroda 3-1 to advance to the semifinals.