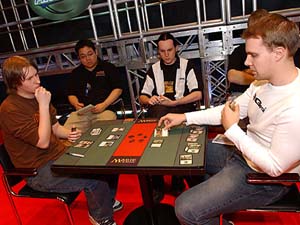 Evans, left, and Harkonen faced off in the quarterfinals.

The other side of the bracket pitted Shu Komuro against Vasilis Fatouros while Murray Evans would be looking to take out Jarno Harkonen. As the various matches prepared to play, Harkonen informed me with a laugh that his preparation for this event hadn't exactly been comprehensive. After a two-year break from the game he came back and played a ton of Magic Online for three days leading up to Grand Prix-Helsinki. For this event, he got in a full seven days of practice -- by just about any pro standards that's a phenomenally low amount of drafting to prep for a PT.

Harkonen is playing in his first Top 8 but I doubt his method will be gaining many followers, even if he runs away with the whole thing. For his matchup it was his green-black deck splashing white against Murray "The Mauler" Evans, who was with black-blue.

On the next table over, Komuro of Japan (playing blue-green splashing red) was facing off with Fatouros (playing black-green) -- the first Greek player to make a Pro Tour Top 8. Cards were shuffled, the lights came up, and the quarterfinals were under way.

Watching both matches unfold, there turned out to be several parallels. Though both green decks looked reasonable on paper, each kept running into the same problems game after game. For Fatouros, the trouble was Soratami Mirror-Mage and Soratami Savant. Seemingly every time I looked over to the board position on that table, Vasilis had a hand of great cards that he just couldn't get (or keep) in play. 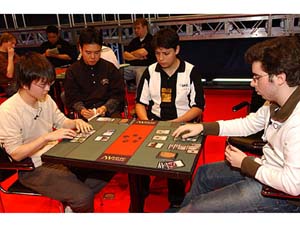 To exacerbate the issue, Komuro's ground creatures were often set to gum up the ground, making it impossible for the Greek to race on the board since what creatures he could keep in play were tied up while the fliers from the Japanese player drained his life total in four- and five-point chunks. Fatouros managed to take one of the four games they played, but each time I looked at their board it seemed to be the same problem -- and there just didn't seem to be much Fatouros could have done to solve it. Sho Komuro advanced to the semifinals, attempting to defend his native Japanese soil a la Masashiro Kuroda at Pro Tour-Kobe.

For the match going on at the adjacent table, there was also a pattern revealing itself. Though Jarno's aggressive deck was often able to mount pressure on the Canadian's life total in the early to mid stages of the game, he kept having trouble putting Evans away before the Canadian's card drawing would stabilize the board and then turn the tables.

This matchup went 3-1 as well, and game after game saw Jarno jamming the Mauler into just terrible looking positions, but all the while Evans was drawing more cards with the help of Counsel of the Soratami, Floating-Dream Zubera, and particularly Honden of Seeing Winds, staying just one step ahead of death long enough to flip the game around once he could bring all that card advantage to bear. And, as with the other match, once that control had been established, the green player was quickly reduced to spectator status as the fliers keep banging in unchecked.

That Harkonen was having so much trouble with a Honden was particularly frustrating because he was running three Hondens of his own (black, green, and white) -- but none of his seemed to matter much when they came up, partly because the Finn simply didn't have the time to pause and get them into play when he drew them, gumming up his hand when what he needed, at least in these games, was more threats.

It was clear as the games unfolded that Harkonen would need to find some way to crank up the pressure. He did manage to take one game with a very impressive team of double Matsu-Tribe Decoy beefed up by Sosuke, Son of Seshiro, but in the other three he wasn't able to seal the deal in time.

Advancing to the semifinals, Murray Evans faces the question if his next opponent can punish his tempo loss from cards like Counsel of the Soratami.