so it all comes down to this. After 17 rounds spread over three grueling days of competition, 234 players lay in the wake of the two who remained. They've come this far, and right now, everything is on the line for them.

It's not just the tournament at this point; it's personal. You just don't make it this far against the world's best without that competitive drive that demands nothing short of domination. Is it nice to know that at this stage you've already made at least twenty thousand dollars? Sure it is. But as Anton Jonsson and Shu Komuro walk toward their chairs under the lights and cameras of the final table, they're not thinking as much about the money. For now, for the next hour or two, all they're thinking about is finding a way to win the title, take the trophy, and become Pro Tour Champion. 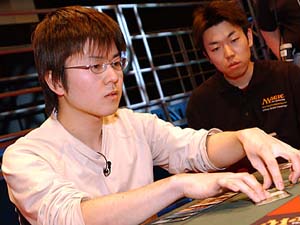 Shu Komuro was playing in his first PT Top 8.

It's the third time they've played each other this weekend. Each has beaten the other once, a grudge match tied with the final match to be played with staggering stakes. Becoming a Pro Tour Champion changes lives. It's changed mine, and several others I know. And when this one's over, one of these two will have it happen to them.

For the opener it was Soratami Cloudskater for Anton followed by an Eye of Nowhere to one of Shu's lands (who hadn't played a spell yet), stunting his development by a full turn. Fortunately for Shu he drew one of his many Sakura-Tribe Elders and was able to get his mana back out on schedule, powering out Feral Deceiver followed by Order of the Sacred Bell.

Anton tried to contain the damage, sending first one and then a second Yamabushi's Flame at the Order when it was saved by a Kodama's Might. Shu had a Kashi-Tribe Reaver to keep up the pressure, but he was taking damage every turn from fliers he'd have to race for now. Groundshaker made a try at Anton's side of the board but Hisoka's Defiance sent it to the dumper instead.

Anton was down to three cards, but one of them turned out to be Teller of Tales, a fine card indeed. A fine card, that is, until Shu's next turn when a Soratami Mirror-Mage showed up and returned half of Anton's team to his hand, a lead pipe while he was down that dropped him to one point of life in the process. The Swede did his best to recover, and did manage to hang on for several turns, but he was too low on life, creatures, and time. 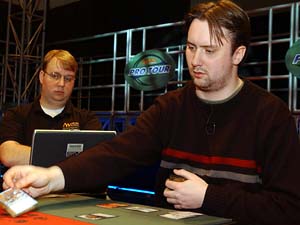 Anton spent a long time deliberating over various sideboard plans, but in the end he opted to swap in two Stone Rains and his copy of Zo-Zu the Punisher. Facing an opponent with 18 lands and three Sakura-Tribe Elders it may seem counterintuitive to go for land destruction, but Anton's deck was faster on the attack while Shu's deck was packed with creatures costing four mana or more. Perhaps more importantly, they could also be aimed at the three red-producing lands in Shu's deck, land that would almost surely be fetched first given the opportunity. With a little luck, he might be able to take the Japanese player's two Glacial Rays out of the picture.

And then Anton massacred his opponent.

It started with Soratami Cloudskater, followed by Zo-Zu -- and punish he did, coming over on turn four with the Cloudskater and a Ronin Houndmaster for a devastating start that had Shu wincing. When he played a land on his next turn he had already lost 10 life, and he hadn't even cast a spell yet.

To make matters worse, the first creature that did manage to get out on the field was immediately locked down by Mystic Restraints. In the first game the advantage had swung several times, but this one was a bulldozing. Shu spent considerably longer in his sideboard after this one, presumably looking for options, but I think at least part of the delay was to buy a little time to shake off what had just happened.

For this one it was Sakura-Tribe Elder/Feral Deceiver vs. Hearth Kami and Ronin Houndmaster. Behind a bit on the race, things got bad for Anton when his Yamabushi's Flame to Shu's freshly cast Teller of Tales was countered by a Kodama's Might off of Shu's last open mana.

It got worse still when Anton's Groundshaker ran into another Hisoka's Defiance, which Shu followed up with Kashi-Tribe Reaver. Anton had the Mystic Restraints to tie it down, but he was still losing the race badly.

t was all over next turn when Consuming Vortex returned his only decent attacker and untapped the Reaver in the process. For Anton, it was time to shuffle up and head to Game 4.

In what was easily the most gripping game of the match, both players tore out of the gates with outstanding openings. For Anton, it was this impressive series: Reach Through Mists, Soratami Cloudskater, Soratami Rainshaper, Ronin Houndmaster, and Kami of Fire's Roar. For Shu, it was triple Sakura-Tribe Elder followed by Order of the Sacred Bell, Consuming Vortex on the Kami of Fire's Roar, counter the Kami when it came back down, and then kill off Ronin Houndmaster with Kodama's Might. 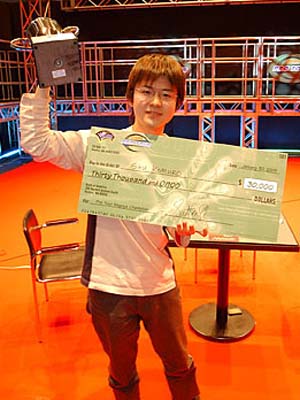 Fighting to get back into this must-win game, Anton went for Teller of Tales, but sagged when it was hit by a second Hisoka's Defiance. But this one definitely wasn't over. Both players were trading hits in a thrilling race. Suddenly it looked like Anton was back in it when he tapped down Order of the Sacred Bell with Mystic Restraints on Shu's upkeep.

With one card left in hand, Shu drew what has to be one of the best top decks in Pro Tour Finals history. With Kodama's Might in hand, he ripped his next card off the top and didn't even try to hide his complete astonishment when he saw what he'd pulled.

Anton cringed at the reaction, holding a fist of good spells he was finally ready to start casting once he untapped. But that turn never came. Teller of Tales hit Shu's side of the table and the visibly excited Japanese player quickly slapped his Kodama's Might on the tapped Order of the Sacred Bell, untapping it thanks to the Teller! In almost the same motion Shu untapped the Order and shoved it into the red zone, and suddenly the tournament was over! For a moment the crowd didn't even realize it was done, and a stunned Anton just sat there staring, unable to move, unable to believe it was somehow over . . . just like that.

For Anton, playing in his fifth Top 8 -- an elite feat that only nine others have accomplished in the history of the game -- that elusive win was going to have to come from somewhere else. Anton will be back, I'm sure of that, but I'm just as sure that he will never forget what that turn felt like.

However, on Sunday Japan gained its second champ, each of which was crowned on back-to-back Pro Tours here in their country. Today, it was Shu Komuro who became the next Pro Tour Champion, and his life just changed . . .